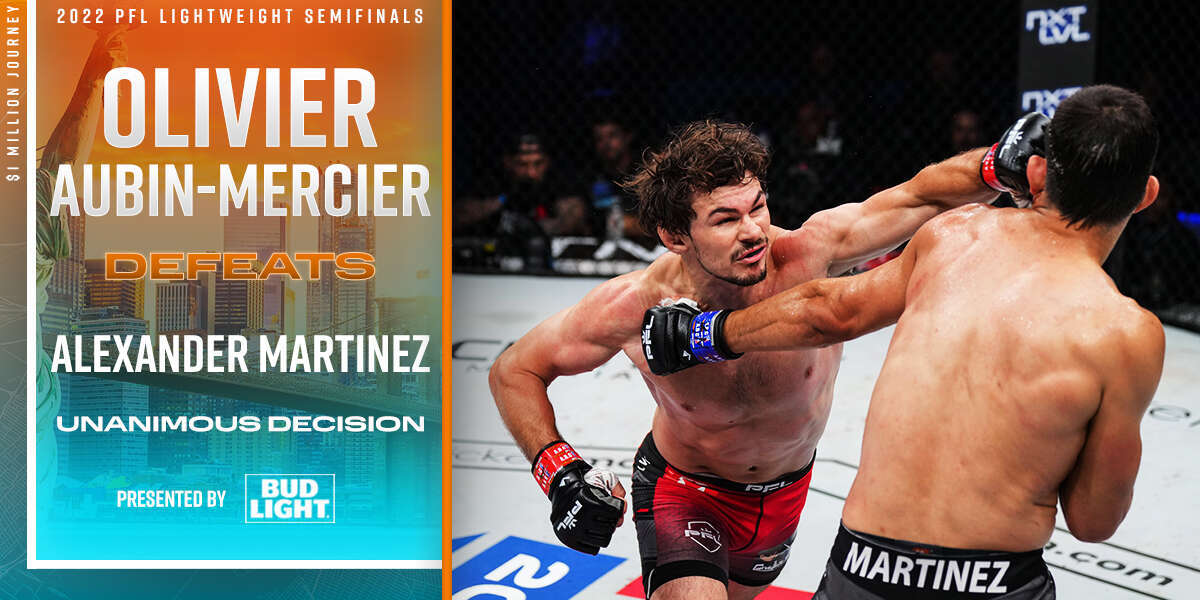 To kick off the Lightweight bracket of the PFL Playoffs, “The Canadian Gangster” and #2 seed Olivier Aubin-Mercier (15-5) meets #3 seed Alexander Martinez (10-2). OAM carries a 4 fight win streak into this bout, including a stretch that saw him become the first fighter in PFL history to defeat 2 former champions in back to back fights (Schulte, Manfio). Martinez, the youngest fighter in the division, looks to build on his 2021 campaign which saw him drop a decision to Loik Radzhabov in the semifinals.

After missing the start of the 2021 Regular Season due to injury, OAM has quickly established himself in the PFL, winning 4 straight bouts with 2 of those wins coming over former champions. The TUF alumni has never been finished and despite his qualms with rules around training and competing for fighters in his home nation of Canada, he seeks to make his countrymen proud and become the 2022 PFL Champion in the process.

While he represents his home country of Paraguay in the SmartCage, Alexander Martinez has lived in Canada since he was 14 years old and has actually trained with OAM in the past. Martinez sports a pristine 4-0 record in PFL Regular Season competition and now looks to get over the hump and win his first playoff bout following a disappointing loss in last year’s semifinals.

The bell rings and they’re off! OAM takes the center of the SmartCage early as Martinez already is looking for his signature low kick. OAM misses big and Martinez punishes him for it, landing a flush roundhouse to the body before engaging the clinch and resetting.

Martinez is probing with his lead hand as OAM lands a big right hand over the top.  They reset and both fighters land big on the break. OAM lands a stiff jab and is in and out before Martinez can make him pay as Martinez fires a high kick that gets blocked.

OAM looks to change levels but Martines is wise to it, throwing a nice kick on the way in to keep OAM at bay. OAM is still controlling the center of the cage but he seems to be having issues with OAM’s length and Martinez is making him work hard in every exchange in the pocket.

OAM lands a nice 1-2 and Martinez returns with a low kick as they keep the pace high through almost 4 minutes. Now it’s Martinez controlling the center and OAM fighting off his back foot but working hard to regain some ground and get his back off the SmartCage. OAM looks to initiate the clinch but Martinez pummels for an underhook and reverses position as he grinds on OAM against the cage before OAM is able to use the whizzer to pull off a reversal of his own as the round winds down.

They break and reset in the center of the SmartCage and OAM catches Martinez with another big right over the top on the way in and that will end the round.

Round 2 is underway and again Martinez opens with that low kick as both fighters just miss big shots.

OH! OAM lands big and Martinez hits the canvas! OAM dives into his guard looking for a finish but Martinez seems to be recovering well as he attacks an armbar off his back.

OAM takes the back after a failed armbar attempt and has the body triangle in with 4 minutes to work. OAM is attacking the RNC and smells what may very well be his best chance at a finish. Martinez is fighting the hands well but he’s in big danger here with so  much time to work against a grappler of OAM’s caliber.

Martinez is still trying to work back to his feet but he needs to be careful as OAM continues to attack the neck at every opportunity. Martinez wisely gets his back to the cage to make it more difficult for OAM to create the angle to finish but with 2 minutes to go he’s staring down the barrel of a 10-8 round.

Martinez is trying to get a hip to the mat but OAM is expertly maintaining his dominant position. With 30 seconds remaining OAM attacks the neck once again but can’t seem to get under the chin of Martinez. It certainly speaks to the ability of Martinez to survive 4 whole minutes of back control against a dominant grappler like OAM.

The 3rd round begins and Martinez is going to need to show some urgency here but just like that OAM lands big and floors Martinez a 2nd time!

In similar fashion OAM dives into the guard of Martinez chasing a finish and is able to take the back with the body triangle again! He’ll have just over 4 minutes to work for a finish this time and Martinez is going to need to do something fast as his championship aspirations are slipping away by the second.

Martinez is again doing a great job fighting the hands but OAM is relentless and keeps attacking. Martinez briefly sits up before OAM uses a half nelson to peel them right back down to the mat in open space. This is a nightmare scenario for Martinez.

OAM is doing an incredible job keeping it where he wants it, not allowing Martinez to get a hip to the mat and work to get up. With 90 seconds remaining it’s all OAM still but it’s beyond impressive that Martinez has survived nearly 10 minutes of dominant back control.

The round winds down and that’ll be the fight, an absolutely dominant rounds 2 and 3 for The Canadian Gangster!