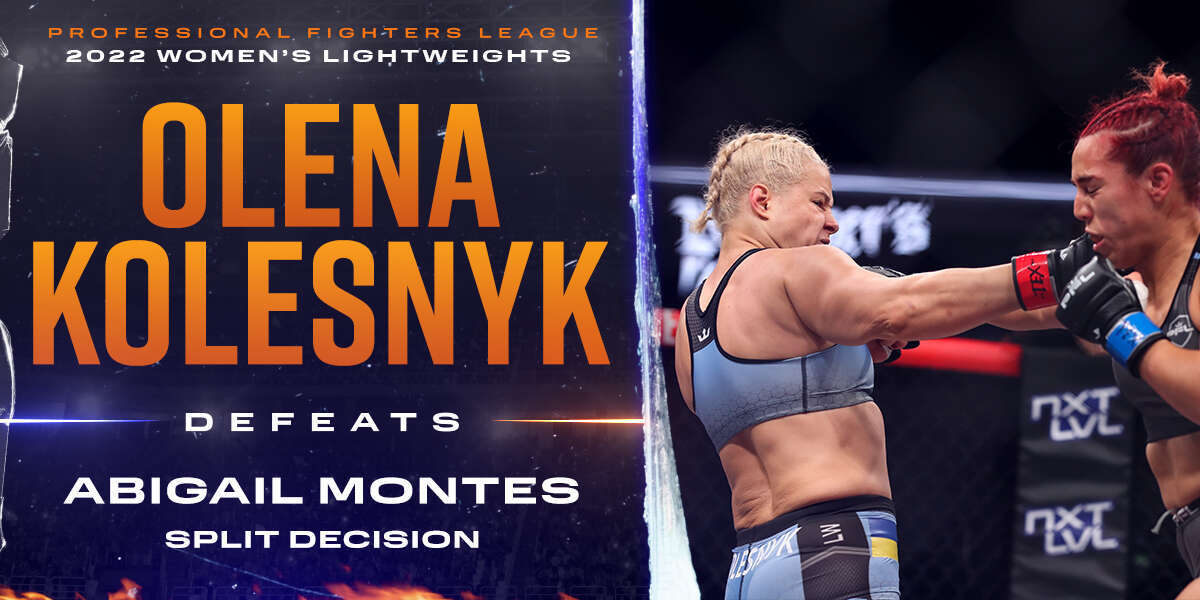 Olena Kolesnyk snaps her losing streak in an emotional brawl

In one of the most compelling matchups of the night, PFL and Ukrainian Native Olena Kolesnyk (5-4) takes on undefeated newcomer Abigail Montes (3-0).

After a tough 0-2 2021 campaign, Olena looks to right the ship after training at Xtreme Couture in advance of this season.  A native of Odessa, Olena was in Kyiv when the war in her home country broke out, and she wound up fleeing the country with her travel documents and a single bag to ensure she would make it to the United States and be able to participate in the 2022 PFL season.

At only 22, Montes is already most notable for handing Claressa Shields her first loss in any combat sport in a Showcase bout during last year’s PFL Championship.  A training partner of UFC fighters Alexa Grasso and Irene Aldana, “Brave” Montes is extremely proud of her Mexican roots and looks to bring that classic Mexican fighter heart into the Smartcage.

Olena drives Montes back to the cage right off the bat and opens with some heavy hooks.  Olena is the much longer, taller fighter and will need to use it against a good grappler in Montes.

Through a minute, Olena is controlling range and cutting off the cage very well, although as I type that Montes is able to come forward and get back to the center of the cage.  Olena is landing some heavy shots early but Montes returns with a right.

Olena is doing a great job keeping her head off the center line and being difficult to hit, but she’ll need to be careful overextending on these power hooks as Montes counters with a right and clips her.

Halfway through the round, Olena is only slightly outstriking Montes, but it feels like Olena is landing with more power and landing the more significant strikes.

As they settle in, Olena seems content to look for counters and stop rushing forward as she did against Larissa Pacheco last year when she landed on the wrong end of a Sportscenter top 10 KO.

Olena lands a big right hook and uses it to initiate the clinch, an interesting choice given her reach advantage.

With a minute remaining in the round, Olena seems content to grind Montes out against the cage.  With 15 seconds left they break the clinch and Olena lands a beautiful 2-3 combo as the fighters get back to the center of the cage. Close round, but should be Olena’s on damage.  She certainly doesn’t look like a +200 underdog.

Olena comes out less aggressive to start the second and Montes lands a big right in the center of the cage.  Both fighters seem to be settling in a little as the pace slows a bit.

Montes rushes in and lands a nice overhand but also eats a counter left hook for her troubles.  Olena seems to be going more kick-heavy in this round, perhaps in an attempt to utilize her reach advantage.

Montes continues blitzing with a big overhand right but isn’t having a ton of success with it.

At 3 minutes left in the round, Montes lands big and seems to stun Olena.  Olena looks to move laterally out of danger along the cage but Montes keeps the pressure on and looks to change levels for the first time,

Halfway through the round, the fighters jockey for position on the cage as Olena fights off a high crotch attempt from Montes and reverses position.  Montes is able to pummel for double unders and reverse position again but cannot do anything with it as Olena repummels and breaks the position, landing a big hook on the break.

Montes is blitzing in and throwing a bit wild, she’ll need to be careful of uppercuts and knees up the middle as she drops her head on these attacks.

With 30 seconds remaining, both fighters land some BIG shots with Montes seemingly getting the better of the exchange.

The 10-second clapper hits and Olena throws her hands up, seemingly thinking the round is over.  She quickly realizes her mistake and resets, narrowly avoiding a Billy Quarantillo/Spyke Carlyle situation.

The final round begins and it’s anyone’s fight.  After a slow start the pace picked up in round 2 and the fighters seem prepared to keep that pace going in our final frame.

Olena has used her front kick very well to strike from a range where Montes can’t hit her.

Both fighters are swinging big and Olena just misses a spinning back fist that may have been the end of the fight.  They continue to swing wildly and Montes slips under a hook and pummels in with double underhooks, pressing Olena against the cage.

Olena, not one to accept a bad position, reverses and breaks the clinch and gets back to the center of the Smartcage where she seems to have the advantage.

Olena continues throwing and landing that front kick to the body and these ladies are SWINGING.  Montes has been a little wild all fight but it will be trouble if she lands one of these big looping overhands.

With 90 seconds to go in the round, neither fighter is definitely ahead as Olena has been able to slip and parry a significant amount of Montes’ offense.

Montes seems to be getting a bit frustrated at her lack of striking success but is able to land a big right.  In response, Olena initiates the clinch with 30 seconds remaining.  Olena briefly loses her mouthpiece and gets right back to swinging to close out the fight.

Both fighters seem to think they’ve done enough as Olena breaks down in tears, overwhelmed with emotion after an incredibly difficult and taxing road just to get to this fight.

It will be interesting to see how the judges see this one, Montes barely outstruck Olena on the cageonomic stats but it did seem that Olena landed more power.  FPR has it tied in round 1 and has Montes just barely edging out rounds 2 and 3, while Randy Couture and Kenny Florian both see it for Olena.

Olena gets the nod! After an extremely emotional fight, it’s certainly a feel-good moment for a fighter who has sacrificed more than most to be in the Smartcage. She earns 3 points and propels herself to the top of the standings in Women’s Lightweight