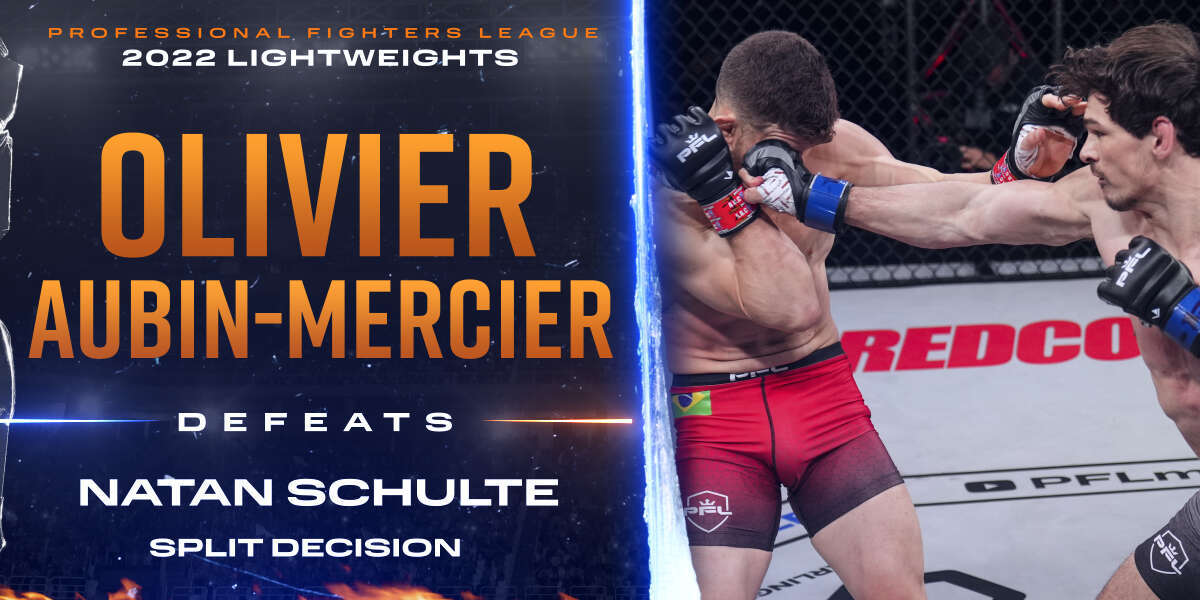 Opening our first ESPN main card of the year, we have 2x PFL Lightweight champion Natan Schulte taking on the Canadian Gangster Olivier Aubin-Mercier.  Schulte had a tough season last year, having his 10 fight win streak snapped by Marcin Held, while OAM missed his first fight of the year due to injury before beating the very same Marcin Held by unanimous decision in his PFL Debut and picking up another win over Darrel Horcher in a showcase bout during last year’s PFL Playoff.  This is the first time Schulte enters a fight as the betting underdog since the 2018 PFL Championship.

The bell rings and our first main card of the year is underway!  In true Schulte fashion, he comes out looking for forward pressure.  OAM lets him know he’s wise to it and uses a jab and a short hook to attempt to keep Schulte at bay.

1:15 in and OAM lands 2 back to back body kicks that really seem to hurt Schulte as Schulte backs up and shells up a bit.  Schulte recovering now but OAM is doing a great job managing range and with his footwork.  Schulte rushes in and OAM hits him with the matador check hook, though not with a ton of impact.

OAM catches Schulte in the eye just over 2 minutes into the round.  I’m surprised Schulte didn’t take more time as it appears he still might be a little compromised from those body kicks, but we’re back to it.

OAM with a beautiful left, slip, right combo and he really looks to be finding the range now as he uses his length advantage to land punches over and around Schulte’s guard.

Again OAM bangs a clean 1-2 but Schulte keeps walking forward.  Both men landing low kicks and working the body as OAM starts to show some redness on his abdomen.

1 Minute in and more of the same so far, Schulte plodding forward but OAM fighting very well from range and moving well laterally.

Natan seems to be picking up a bit more momentum here as he gets the timing down on OAM’s strikes and is able to start incorporating some head movement and slips.

Halfway through the round and Schulte looks much better than last round.  He’s landing more volume and getting hit less, but OAM lands a stiff left as I sing Schulte’s praises.

OAM lands a nice 1-2 followed by a nice knee and Schulte answers with a short combo.  With a minute left this round is still anyone’s to steal if someone can put an exclamation point on it.

Schulte starts to cut off the cage and lands a big hook as OAM tries to get out of the way.  Schulte gets the underhook and presses OAM into the cage and peppers him with small shots.  Very good chance this is 1 a piece going into the 3rd.

Our final round starts and Schulte blasts a leg kick early.  30 seconds in and the pace has picked up noticeably from the second.  OAM with a slick back take but Schulte hits the gramby roll and they’re back to their feet, some lovely judo and BJJ on display from both men.

Schulte appears to be the fresher man 90 seconds into our final round here as OAM looks to circle and pick his spots.  They move toward the center of the cage and OAM lands a heavy leg kick.  Schulte keeps coming forward though and gets off 2 big short uppercuts and a hook that appeared to hurt OAM.

Halfway through the round and it can go either way right now, Schulte might be starting to pull away and is definitely the fresher fighter.  OAM is still throwing but he’s noticeably lost some zip on his punches.

Schulte again initiates the clinch and starts throwing short uppercuts and knees with 90 seconds left in the round.  OAM is going to need to show some urgency here, if he spends the rest of this round pressed against the cage he may very well lose this fight.

Schulte continues to just grind him down and throw short strikes in this clinch and that’ll end the round.  3 was Schulte, 1 was OAM, that leaves 2 as the swing round.  What’s it gonna be judges?!

Razor close fight, split decision not surprising in the slightest. All comes down to Round 2 as the swing round