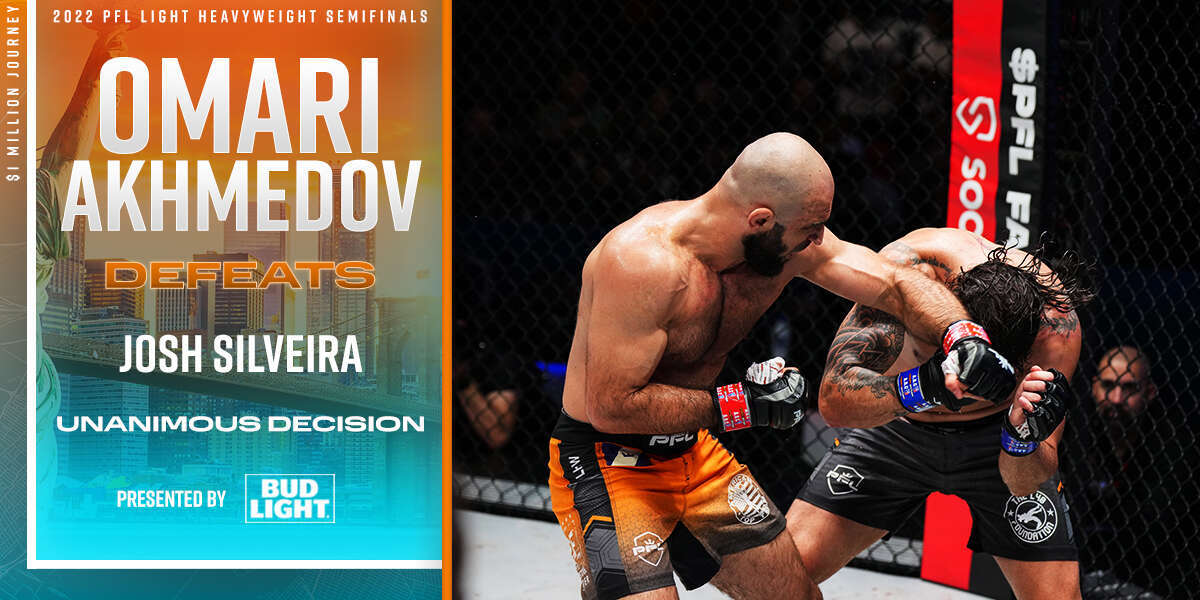 Keeping it moving at Light Heavyweight, #2 seed Omari Akhmedov (23-7) looks to continue his career resurgence against new kid on the block and #5 seed Josh Silviera (9-0).  Silveira was not originally slated to compete in the PFL Playoffs after an injury cost him his 1st Regular Season bout.  However, he arrived in style at PFL 4, viciously knocking out Marthin Hamlet with a head kick to earn the Quick Six and the #5 seed.  As the official alternate for the PFL Playoffs, Silveira’s number was called after reigning World Champion Antonio Carlos Jr. was forced to withdraw from this bout due to injury. Teammates collide as 2 American Top Team mainstays meet in this Playoff clash.

A pioneer for Dagestani fighters, Akhmedov racked up a 9-5-1 record in the UFC before making the jump to the PFL in October of 2021. Following an unsuccessful promotional debut against the late Jordan Young, Akhmedov has been on a man on a mission this season, picking up a 1st round KO over Viktor Pesta and a 2nd round submission over Teodoras Aukstuolis en route to clinching the #2 seed.

One of the most highly regarded prospects in MMA before signing with the PFL. Silveira captured both the LFA Middleweight and Light Heavyweight titles in his time on the regional scene. Silveira has finished 8/9 career fights, including his win on the PFL Challenger Series and his promotional debut against Marthin Hamlet. The son of former fighter and ATT coach Conan Silveira, Josh looks to prove that fighting really does run in the blood tonight at MSG.

The ATT teammates touch gloves and we’re underway! Silveira is probing with the lead hand early as Akhmedov lands a heavy inside leg kick. There’s clearly mutual respect for power as both fighters feel each other out early. Silviera is constantly switching stances and just making it difficult to read his entries as Omari loads up on a kick and misses.

Silviera lands a nice body kick as the USA chants rain down from a raucous crowd here at Madison Square Garden. Akhmedov goes low and lands a nice straight to the body before Silviera returns with a quick flurry up high. Silviera follows up with a nice kick to the body and they reset, but not for long as Akhmedov presses forward and lands a nice right hand.

Both fighters are stalking and looking for their openings as Akhmedov fires another nice kick to the body. Silviera seems a little gun shy and may be waiting for Akhmedov to expend some more energy and tire out a bit before turning up the aggression.

Akhmedov throws a bomb of a right hand but misses and overextends as Silveira secures his first takedown of the fight but only briefly as Akhmedov quickly works back to his feet and gets back to striking range.

Silviera shoots again but Akhmedov is wise to it this time and stuffs it, securing the over under position and driving Silveira back into the SmartCage as the round winds down.  The fighters jockey for position for 30 seconds as a competitive opening salvo comes to a close.

The fighters are keeping the pace high to start the 2nd round with both landing in a quick exchange. They get back to range before Silveira shoots and gets Akhmedov to the mat once again. Ever the warrior, Akhmedov quickly works back to his feet and fights Silveira off as he attempts to take the back.

Akmhedov takes the center of the cage and lands a nice right hand as they reengage as Silveira circles off and gets back to safety. Akhmedov looks to be slowing down a little bit as the fight progresses, he’s picking his spots carefully but there’s a little less zip on those punches.

The fighters exchange low kicks before moving back to the center of the SmartCage.  Silveira is doing a good job handfighting to create angles to strike off but the big shot has eluded him thus far. The live odds show Akhmedov is now the favorite after beginning the fight as a moderate underdog.

Silveira briefly gets the fight to the mat again but he can’t hold Akhmedov down as we’ve seen all fight so far.

The round comes to an end with Akhmedov getting off a few punches, Silveira will likely need a finish to keep his championship hopes alive.

Josh and Omari hug it out to start the 3rd round. How do you have it scored at home?#PFLPlayoffs LIVE on ESPN+
🌎 https://t.co/jPNvomkWj8 pic.twitter.com/AaO92S93fv

A crucial 3rd round begins and Silveira is going to need to sell out here. Akhmedov is keeping the pressure on, walking Silveira down and landing some heavy shots. Both fighters land small in a short exchange as Akhmedov is really committing to the bodywork late in the fight.

The crowd is trying to will Silveira to victory as he fires a high kick that Akhmedov blocks. Silveira has 3 minutes to pull off the comeback and Akhmedov is relentlessly working the right hand to the body before landing with the right over the top.

Silveira lands a nice left hand but needs to follow it up with something with 2 minutes remaining.

With 90 seconds to go, Silveira needs to sell out here as Akhmedov has swelled to a 15-1 favorite on the live line. Silveira looks for the takedown in a last ditch effort but Akhmedov stuffs him once again. With 10 seconds remaining, Silveira secures the takedown but doesn’t have enough time to do anything with it as the bout comes to a close.

We shall see how the judges saw it, but that was an impressive, gutsy performance from the wily veteran in Akhmedov.

Omari Akhmedov pitches a shutout and reigns supreme in a battle of American Top Team teammates and punches his ticket to the 2022 PFL Championship!