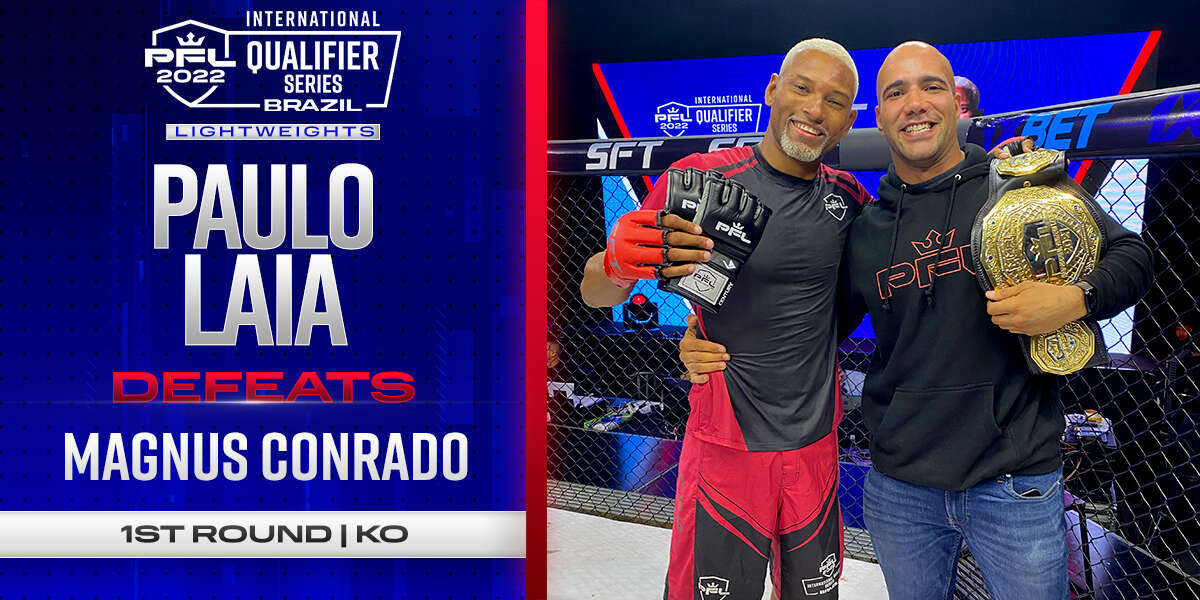 The PFL’s International Qualifier Series continues tonight with a lightweight tournament in Sao Paolo, Brazil.  4 lightweights clash with only 1 man walking away with a 2023 PFL Challenger Series Contract.  The tournament will consist of 2 bouts, a 2 round semifinal and a 5 round final all in one night with the winner being awarded the aforementioned Challenger Series contract.

In our first bout of the evening, Paulo “Laiá” Henrique takes on Ednilson “Cai-Cai” Santos.

Santos comes out gunning and swings big early, but he overextends and slips, allowing Henrique to take advantage and wind up on top.  The top position is short lived however as Santos is able to sweep to top position as Henrique works toward the cage and starts trying to build a base and get back to his feet.

Henrique attempts to explode with a hip escape and is able to create a scramble and work back to his feet, but Santos keeps him engaged in the clinch with double underhooks, not allowing the rangy striker to get back to range.

Santos attempts a hip toss but Henrique is able to hold on to the whizzer and pop right back to his feet. Santos continues to pummel for underhooks and keep the pressure on, keeping Henrique firmly pressed against the cage.

Finally Henrique is able to create some space and get back to the center of the cage.  Henrique blitzes in landing a few short punches and a spinning backfist before they re engage in the clinch and Santos is able to pummel his way back into dominant position.

Santos now attempts to change levels for a double leg takedown and after a valiant effort from Henrique, Santos gets the fight to the mat and lands in top half guard.

The round will end with Santos maintaining top position, Henrique will need to come out very aggressive in the next round to keep his hopes at the PFL Challenger Series alive.

The fighters touch gloves and the 2nd and final round is underway.  Henrique is pressuring early as both men exchange in the pocket and land some nice strikes with Henrique probably getting the best of the exchange.

Santos perfectly times a level change under a hook but Henrique is able to fight him off and get back to distance, unloading a few nice hooks in the process.  Henrique lands a big right hook that gets Santos moving backwards and Santos decides to shoot.

Once again, Santos is pressuring Henrique against the cage but he’s having trouble scoring on the judges cards despite the dominant position.  The ref seems to agree, separating the fighters.

Santos wastes no time shooting again and we’re right back up against the cage, with Henrique complaining to the referee.  Santos secures a takedown but Henrique is able to reverse and wind up in full mount with 2 minutes to go.

Henrique is doing a good job making his dominant position count, peppering in short blows and making Santos work off his back.

With a minute to go Santos opens up once more and rains down a flurry of ground and pound, this has easily been the most significant damage either fighter has done tonight.

With 30 seconds remaining Santos is able to work back to his feet and he now finds himself with his back against the cage as Henrique breaks and fires a monster uppercut that just misses.

That will be it for the 1st bout of the night! Notably, if the judges score the fight 1 round each, they then revert to judging the fight as a whole.

Paolo Henrique wins our first bout of the evening and secures his spot in tonight’s main event!

Fabricio “Baikai” Martins and Magnus Conrado clash in our 2nd bout of the evening with the winner moving on to face Paolo Henrique for a PFL Challenger Series contract!

The fighters touch gloves and we’re off! Conrado opens with a big front kick up the middle that just misses as he throws a teep at the body and attempts to find his range.

Conrado throws another kick but this time Martins is able to catch it and use it to get in close in the clinch and change levels for a double leg.  They briefly hit the mat but Martins quickly pops back up.

Martins is content to continue working in the clinch, establishing double underhooks and looking to set up trips before taking the back.  Martins is able to get a hook in, take the back, and use his other leg to push off the fence and into the center of the cage.

Conrado does not give up and scrambles to recover half guard as Martins is now bleeding from his nose. Conrado attacks an omoplata, likely looking for a scramble opportunity and he gets it, Conrado reverses position and he’s got the mount!

Conrado wastes no time getting to the back and attacking the neck all the while chaining together attacks until Martins makes a mistake! Martins gives his neck and Conrado gets the RNC finish in round 1!

Magnus Conrado with the 1st Round RNC Finish!

Magnus Conrado punches his ticket to the main event with a 1st round sub! One would think he will be the fresher fighter after finishing in the first as opposed to going the distance like Henrique did.

Paolo Henrique and Magnus Conrado are set to meet for their 2nd bouts of the evening in our main event with a PFL Challenger Series contract on the line! It’s winner take all as PFL gets back to its roots with a single night elimination tournament.

The fighters touch gloves and Henrique quickly takes the center of the cage but Conrado cinches up a bodylock and takes Henrique down, but Henrique is able to reverse on the way down and winds up on top!

Henrique wastes no time, opening up and knocking Conrado out with the ground and pound in under a minute!

Wow! What a way to punch a ticket to the Challenger Series for Paolo Henrique!

Paolo Henrique gets it done quick and has officially secured a contract for next year’s PFL Challenger Series!