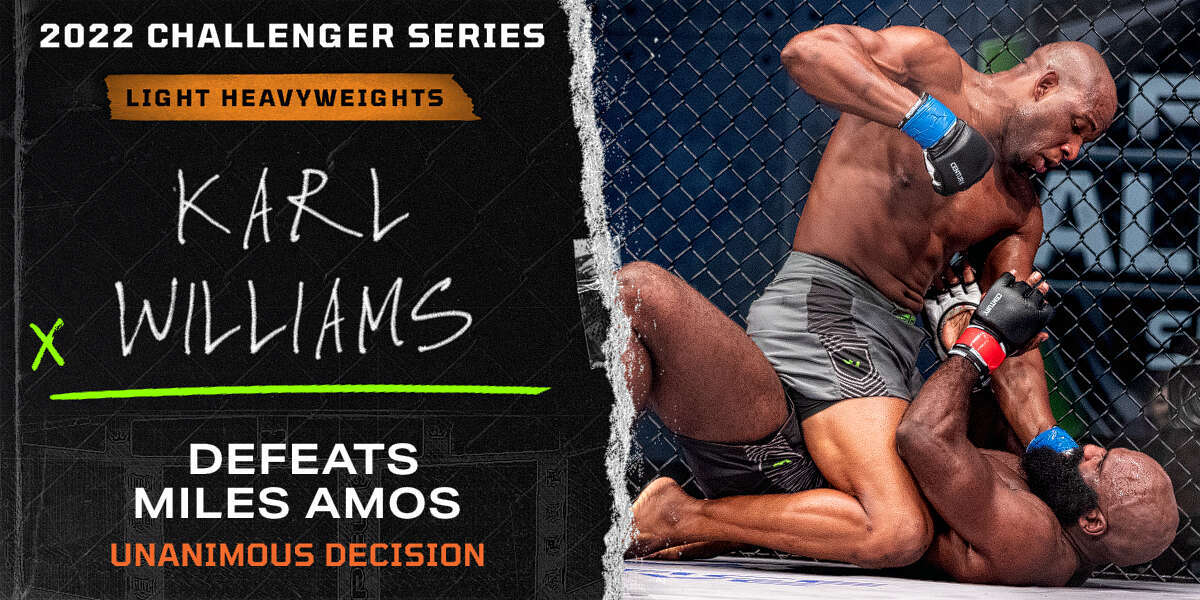 The 2022 PFL Challenger Series is here.

And clearly, the PFL likes to change fighters’ lives. The organization differentiates itself from the competition with a season format across six weight divisions, and now PFL brass ups the ante for 2022 by introducing the PFL Challenger Series.

With the Challenger Series’ opening night, eight fighters will compete, and one will leave with a fresh PFL contract. With an impressive enough win, that fighter might even move straight into the 2022 PFL season.

In other words, one fighter might punch his ticket for a chance to earn $1 million and the PFL belt.

Not a bad deal.

Amos enters the fight as a slight favorite (-105), but anything can happen under the bright lights. Here’s how the fight played out:

They touch gloves, and the PFL Challenger Series is live. Williams lands a series of right hands, and Amos clinches. They battle for position, and Williams changes levels for the takedown and gets it, landing immediately in side control.

Williams appears heavy and aggressive from the top early, landing ground strikes while preventing Amos from reclaiming guard. Repeatedly, Williams tries to set up the crucifix, but Amos is able to defend.

Nice timing from Amos allows him to stand. Williams looks to mount, and Amos uses the opportunity to create space and get back to his feet. They clinch immediately, with Williams initiating the action there. He hits a nice trip to put Amos on his back once again as the round ends.

Amos wings a massive right hand to start things in Round 2, and Williams closes the distance, once again forcing a clinch. From there, he explodes into the takedown, dragging Amos back to the canvas, where he’s immediately back in side control.

Not a ton of action here, but Williams continues to dominate from the top. Amos simply cannot create the space he needs to force a scramble, and Williams chips away from the top.

Now, Amos reclaims half guard with 1:30 to go in the round. He swivels his hips to throw up an armbar attempt, but it’s not there, and Williams passes back to side control. The round ends with Williams back on top, almost certainly up two rounds to none.

Amos begins the round wading in with punches, and Williams calmly clinches. They separate. Another big right hand from Amos, but Williams sees it coming, avoids it, and clinches once more. Level change from Williams, and the fight’s back on the ground.

Now, Williams gets mount, and he’s raining punches. The energy in the arena noticeably increases as Williams picks up the pace.

Amos briefly bucks to initiate a scramble, and he eventually reclaims full guard. Nicely done to get out of mount, but he remains in an unfavorable position. Williams peppers way with some shots from the top before sliding back to side control.

Amos escapes out the back door, and they’re back on their feet with 1:30 left in the fight. Nice jab and body kick from Amos. He’ll need a finish here. Instead, Amos telegraphs a shot from the outside, and Wiliams steps aside and winds up on top as they hit the ground.

Fifty seconds to go, and Williams works from Amos’ full guard. Williams clearly wants to impress with a finish, but it’s not happening, as Amos avoids any serious punishment up to the final bell.

Williams controlled the fight, dictated the action, and neutralized any offense from Amos. He takeshome the unanimous decision.