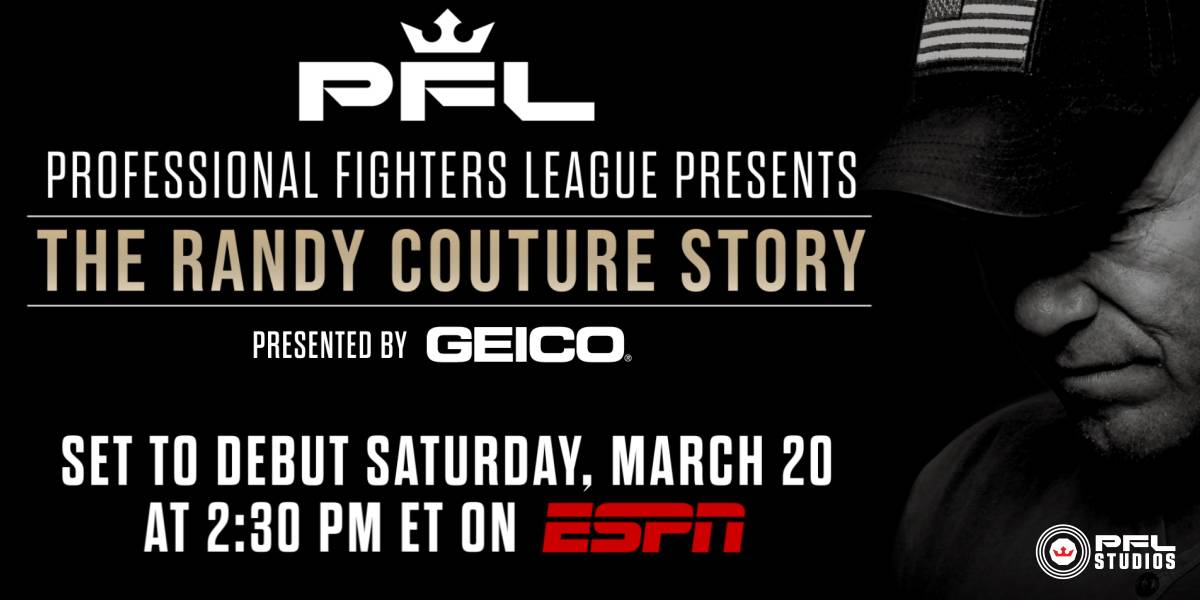 NEW YORK (March 16, 2021) — The Professional Fighters League (PFL), the fastest growing and most innovative sports league, today announced that the first episode of its four-part documentary series, The Randy Couture Story, presented by Geico, will air on Saturday, March 20 at 2:30 pm ET on ESPN. The episodic series highlights the remarkable life of one of the greatest fighters of all time – Randy “The Natural” Couture – a six-time UFC champion and hall of famer.

Following the conclusion of the first episode on ESPN, all four episodes will then be available on-demand exclusively on ESPN+.

The four-part story will look back at the most significant moments in Couture’s career while providing viewers with an intimate look at his involvement with the PFL through commentating, his Hollywood pursuits, and other endeavors beyond the cage. Notable sports and entertainment stars including fellow MMA legend Chuck Liddell, Chris Pratt, Jay Glazer, former MMA referee and commentator John McCarthy and others will be featured in the series.

The series will provide an exclusive look into how Couture became the world-renowned figure fans grew to love, evolving from the ultimate underdog to finally cementing his legacy and helping build MMA into a global mainstream sport. Couture is a true everyday American hero having served in the U.S. military and consistently beating the odds.

“It was a privilege for the PFL to produce “The Randy Couture Story” as he is an MMA legend, a true champion and an incredible person who inspired so many, as viewers of this series on ESPN will see.” said PFL CEO, Peter Murray. “Randy defined the sport of MMA, and we are proud to have him as part of the PFL family.”

“It’s an awesome feeling to have my own documentary series chronicling my journey as an MMA athlete and everything I’ve done outside of the cage,” said Couture. “The PFL is a global fighter-first organization and I wholeheartedly believe in the format and everything they are doing as a leader in the sport. I’ve been through so much in my life and I know how hard the PFL team has worked on this series. I can’t wait to watch it – it’s going to be special.”

PFL Studios is a fully integrated global media division of the PFL producing original MMA content for all platforms including television, digital and mobile. Ten programmatic series were developed over the course of 2020, diving into the untold stories behind some of the most captivating moments in the league’s history, and PFL Studios will unveil more thrilling, never-before-seen content over the course of this year.