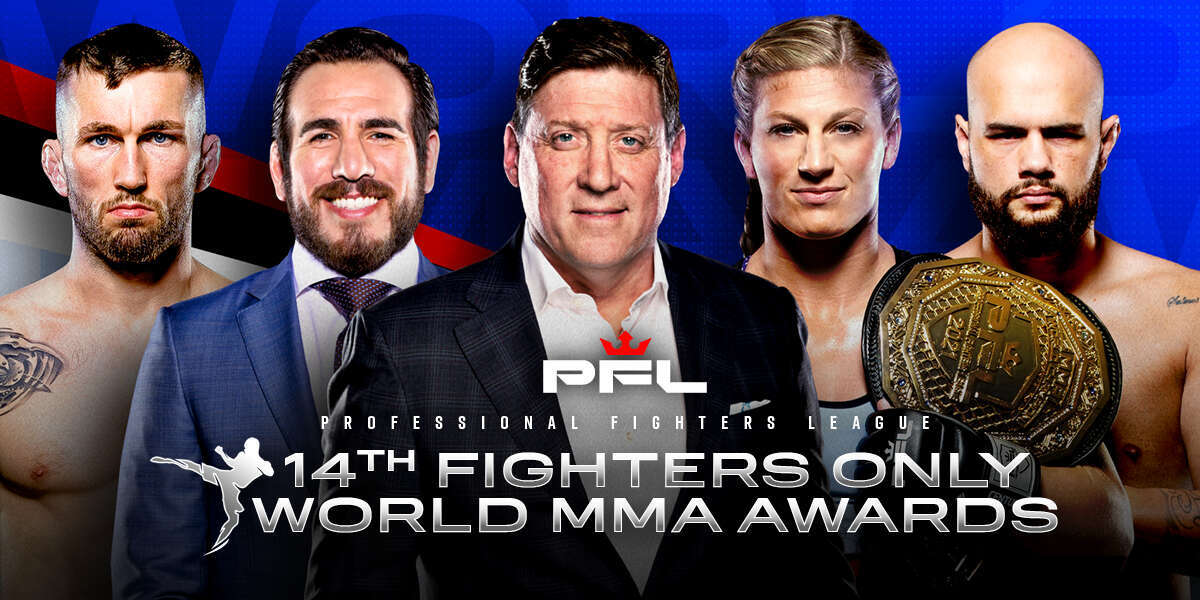 Fighters Only has just announced the nominees for their 2022 World MMA Awards and there is no shortage of familiar PFL faces in the mix!  With award categories for Fighter of the Year, Promotion of the Year, Submission of the Year, Knockout of the Year, and more! The Fighters Only World MMA Awards are an all-encompassing award show for all things MMA. Fans have the opportunity to make their voices heard and vote for all of their favorites at worldmmaawards.com between now and September 30th, with the awards ceremony to follow live from Las Vegas. Award eligibility is based on accomplishments between July 1, 2021 and June 30, 2022. Per Fighters Only CEO Rob Hewitt, “Las Vegas will once again be home to the world’s best MMA fighters and celebrity fans who will all come together to celebrate. Growing on previous years, the 2022 event will be free from restrictions and have a greater broadcast reach, making sure our fan-focused show, the ‘Oscars’ of MMA, will pay greater tribute to the sport and its award winners than ever before.”.  As the only MMA award show that features fan voting, this is an excellent opportunity to make yourself heard as a fan and support your favorite fighters and promotions!

The most feared woman in MMA looks to add some hardware to her already impressive trophy case this year and earns her nomination following 4 wins and 3 stoppages during the eligible period, including finishes of Genah Fabian and Taylor Guardado in last year’s PFL Playoffs.

One of the most shocking results of the PFL Regular Season sees Stevie Ray earn a nomination for Submission of the Year! Coming into the fight as a significant underdog, Stevie submitted Anthony “Showtime” Pettis with a modified bodylock/twister to punch his ticket to the PFL Playoffs and earn himself the nomination for this prestigious award.

STEVIE RAY GETS THE TAP!!!!

In another of the more shocking outcomes of the PFL Regular Season, Matheus Scheffel entered a bout with Bruno Cappelozza as a massive 4-1 underdog.  Scheffel went on to hand Cappelozza his first ever loss under the PFL banner, thoroughly controlling the reigning champion for 3 rounds en route to a unanimous decision victory.  Many fans wrote Scheffel off after he was knocked out by Ante Delija in his first bout of the PFL Regular Season, and yet he proved that anything can happen in the SmartCage and earned the biggest win of his professional career!

PFL, Promotion of the Year

The PFL joins the UFC, Bellator, KSW, and Cage Warriors as nominees for the best MMA promotion of the year! Following a tremendously successful 2021 campaign that culminated with the PFL World Championships at the Seminole Hard Rock in Hollywood Florida, the promotion has only built on that momentum in 2022.  PFL has experienced record growth in viewership, sponsorship, and fan engagement and looks to keep the ball rolling with the upcoming PFL Playoffs which kick off at Madison Square Garden on August 5th.

As the face and voice of the PFL, CEO Peter Murray has spearheaded the aforementioned growth of the PFL as a leader in the MMA and combat sports space.  This nomination is a recognition of all of his efforts both behind the scenes and in front of the camera in establishing the PFL as the #2 MMA promotion on Earth.

Kenny Florian, Analyst of the Year

A breath of fresh air for MMA fans, “KenFlo” has been a terrific addition to the PFL broadcast team from day 1. Expertly balancing the perspective of a former fighter who has competed at the highest level with the skill of a professional broadcaster, Kenny Florian has been an integral part of the PFL’s success over the past 2 seasons.  KenFlo always provides expert analysis and makes sure everyone from the most casual to the most hardened fan knows exactly what they’re watching by breaking down all of the intricacies of MMA that aren’t always readily apparent to the untrained eye.