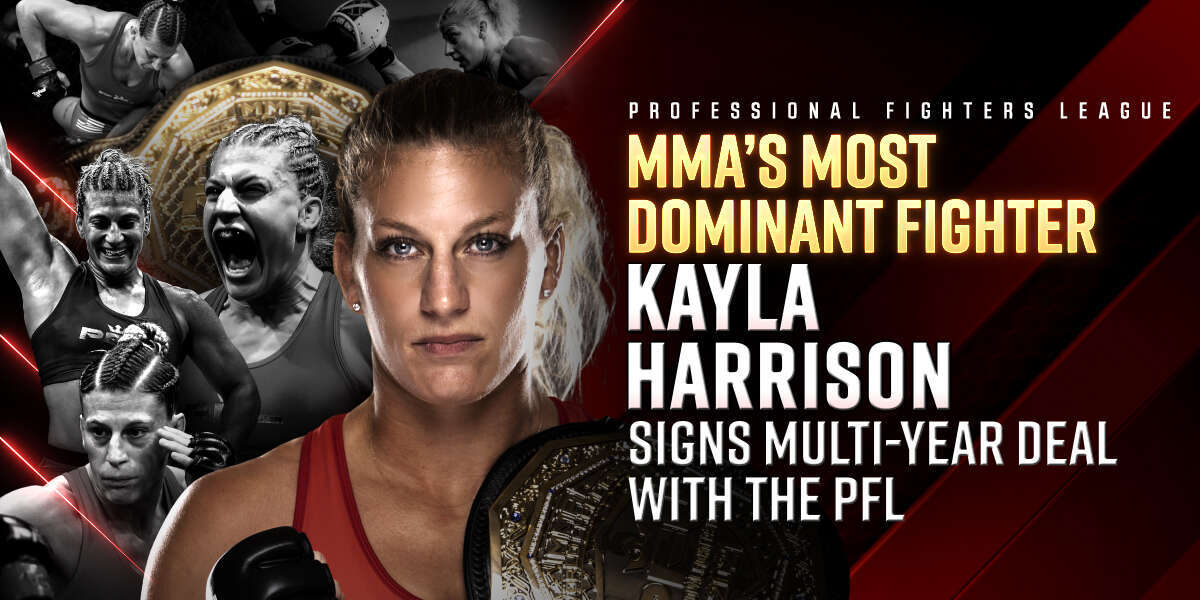 HARRISON TO COMPETE IN PFL 2022 SEASON BEGINNING APRIL 20
ON ESPN NETWORKS AND SIMULCAST ON ESPN+ IN U.S.
PLUS DISTRIBUTION TO 160 COUNTRIES ON PREMIUM SPORTS PLATFORMS

NEW YORK (March 8, 2022) - The Professional Fighters League (PFL), the fastest growing and most innovative sports league, has announced two-time Women’s Lightweight champion Kayla Harrison will return to the PFL SmartCage with a multi-year agreement. The most sought-after fighter in the world, Harrison is a two-time Olympic gold medalist and regarded as one of the top combat sport athletes.

Harrison holds a perfect record in PFL, winning two titles and million-dollar purses, and her talents were sought by every major promotion across the globe. When she steps into to the SmartCage for the 2022 Regular Season, Harrison will face the most decorated Women’s Lightweight division in PFL history, including former world champion Julia Budd.

“It is a privilege to announce the PFL has signed the most dominant MMA fighter in the world, Kayla Harrison, to a new multi-year agreement,” said PFL CEO Peter Murray. “I am also excited to announce the PFL is launching a new Pay-Per- View Super Fight Division where star MMA fighters will compete on a global stage against the best fighters in the sport.  Two-time PFL Champion, Kayla Harrison, will be fighting in the PFL’s 2022 Season starting this April on ESPN networks and will also continue to build her legacy as a main event in the PFL’s PPV Super Fight Division.” Harrison’s first opponent in 2022 will be announced in the coming weeks, along with the entire PFL Regular Season schedule.

Following a breakthrough year that saw 100 percent audience growth, PFL has accelerated its momentum in the early part of 2022 with a multi-year renewal with ESPN, generating widespread buzz with its unprecedented Challenger Series exclusively on fuboTV and adding several leading brands to its blue-chip sponsorship portfolio.

Professional Fighters League is the No. 2 MMA company globally and features an elite talent roster with 25 percent of its fighters independently ranked in the top-25 of the world, including 2021 PFL champions Ray Cooper III and Movlid Khaybulaev. PFL has live event coverage in 160 countries on leading distribution platforms and delivers a unique, innovative product to the more than 600 million MMA fans globally.