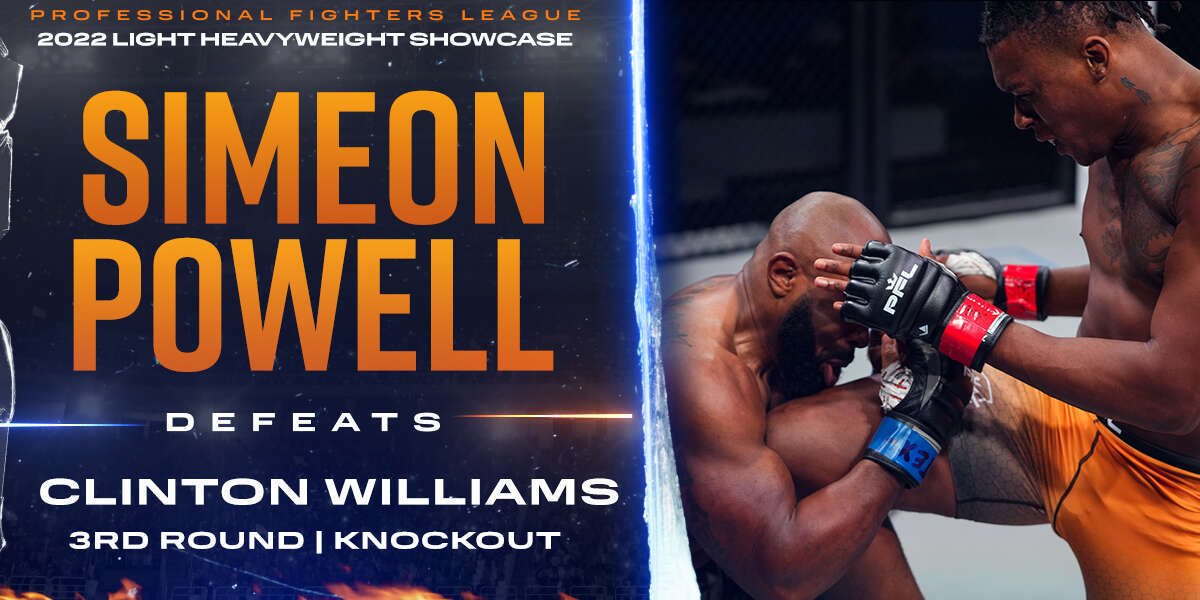 Who will walk away from their PFL debut with the W? Let’s find out, shall we?

The fighters touch gloves and we’re officially off!  Clinton Williams moving forward and pressuring early to try to negate the reach advantage Simeon Powell possesses.  Powell starts to look for his jab and the occasional low kick, but he is constantly moving backward and is having trouble establishing his striking range.

With 2 minutes to go in the round, Williams smoothly enters the clinch and drives Powell back into the cage.  Williams isn’t doing a ton of damage, but he’s doing a good job controlling Powell’s wrist and hips and not getting hit. At 20 seconds left in the round, Powell manages to break the clinch and fires a clean 1-2 that causes Williams to turtle up a little.  Powell walks him down for the last 10 seconds and our first round of PFL1 is in the books.

The doctor came out to check William’s eye between rounds as the desk speculates he poked himself in the eye somehow.  No matter, on we go.

Williams again tries to open the round by pressuring and coming forward, but Powell is doing a much better job with his lateral movement in this round.  1 minute in, Williams lands a big overhand left that was probably the most significant strike of the fight for him so far.  Powell lands a few punches from the outside and again Williams is able to swarm him, get the body lock, and get the fight to the cage.

Once in the clinch, Powell fires a knee off the back of the cage that lands low on Williams.  The ref breaks them up to let Williams recover.  Interestingly, they didn’t give Williams the position back on the restart.

Williams looks a little fresher after taking a few minutes for the low blow, but Powell is still landing that 1-2 very well.  After taking a few clean punches, Williams uses his left hook to change levels and get in on a double.

The fighters hand fight on the cage until Powell gets wrist control and is able to break the clinch and instantly Powell is back to throwing those straight punches.

HUGE takedown for Clinton Williams as we enter the final minute of the round.  He winds up in top half guard and doesn’t do a tremendous amount of damage with the position. We’re on to the third.

And the final round of the fight has begun.  Williams showing some urgency early understanding he is most likely down 2 rounds.  Smartly, Williams sells out for the takedown and gets it, they land in side control.

Powell is trying the old “jiu-jitsu is fake so I will just stand up” but Williams is wise to it, applying heavy shoulder pressure and controlling the wrist to keep the fight on the mat.  Suddenly, Powell is able to explode with the underhook and get the fight back to the feet.  Another ground exchange with Williams on top left you wanting more damage from Williams.

The size difference is very apparent at this point, Powell is able to get his jab off at will and is doing a good job following it up with a cross although he would be well served to mix in a few more strikes and work the body a bit.

With 90 seconds to go, Williams gets his second takedown of the round.  As soon as Williams attempts to get off some ground and pound, Powell is able to take advantage of the opening and get right back to his feet.

Powell gets back to the fight and fires a knee right down broadway and FACEPLANTS Williams.  A good ole fashion canvas nap to start our show tonight, my goodness that was a VIOLENT finish. 20 seconds left on the clock and Powell decided that the judges’ scorecards are for the birds.

Still in awe of that finish, my lord. The SmartCage has claimed its first sacrifice of the year.