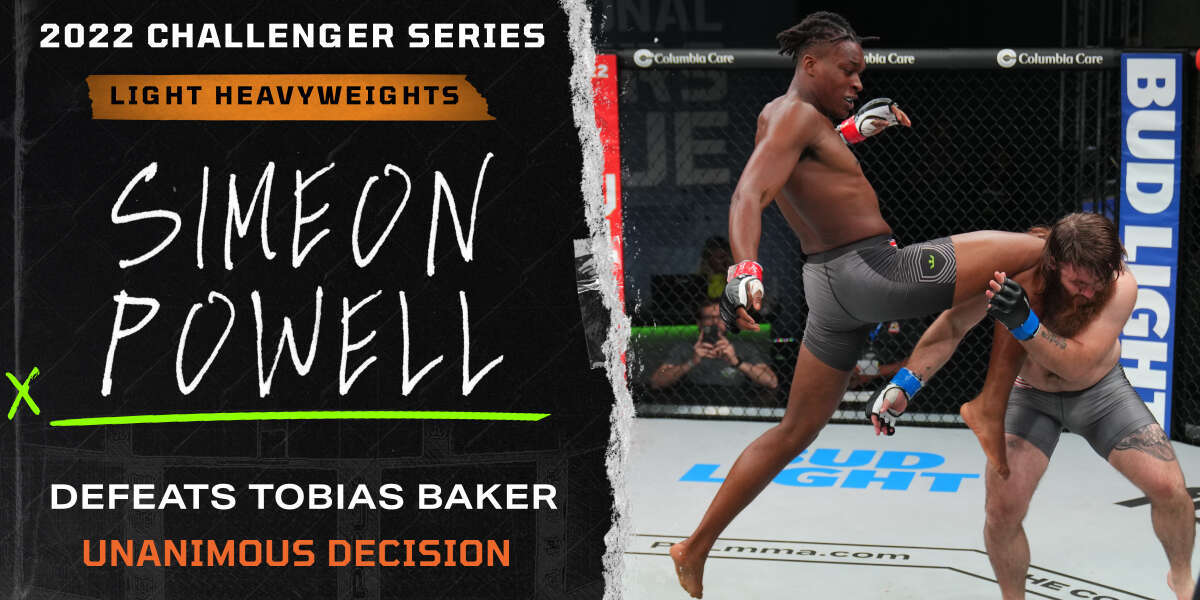 Light heavyweights take center stage for the third bout during Week 8 of the 2022 PFL Challenger Series, as Simeon Powell (4-0) looks to keep his undefeated record intact against the 2-1 Tobias Baker.

Interestingly, neither fighter’s seen the second round in his professional career. Powell scored two knockouts and two submissions in his four victories, while Baker won his first two via first-round knockout before getting submitted in short order during his third trip to the cage as a pro.

In other words: Don’t blink, friends.

They touch gloves, and we’re off. Powell’s length and reach advantage is apparent early, as he keeps Baker on the outside as they circle the cage.

Side note: Baker looks like a light heavyweight Roy Nelson, and that is just fantastic.

Back to the fight, where they clinch briefly against the cage before separating. Powell’s finding his range, landing repeatedly on Baker’s bearded-and-mulleted dome. Undeterred, Baker charges forward, initiates the clinch, and scores the takedown.

He moves to side control then quickly to mount, putting Powell is a bad spot with two minutes to work. Brief scramble, and Baker jumps on a guillotine. Powell defends nicely and escapes back to his feet, though, where he gets back to work at range.

Flying knee from Powell lands, followed by a guillotine attempt. He releases it and goes to town with a series of punches, nearly all of which land cleanly. My goodness. Baker truly is a mini Roy Nelson.

No idea how he ate those shots, but he did. The bell sounds, and they head to their stools, Baker looking absolutely gassed in the process.

Did Baker regroup between rounds?

He pushes forward aggressively, but Powell isn’t having it, landing a flying knee followed by a series of punches in return. Strong straight right to the body from Powell.

Baker’s back is stuck on the fence here, and Powell is looking for his opening. Finally, Baker works off the fence and back to the center, but Powell walks him right back again with a strong right hand.

There’s some serious patience from Powell on display here. Baker’s game and throwing some counter bombs, but it’s pretty clear Powell controls the pace and momentum of this one.

Was that an Iminari roll attempt from Baker? My goodness. It didn’t work at all, but it looked cool for a second. So there’s that.

Calf kick now from Powell, followed by a punch-punch-punch-knee combo. This is a clinic. Baker might be too tough for his own good, as he continues to eat shot after shot right on the chin with not even a wobble.

The round ends, and we’re off to the final five minutes.

Baker is still upright, and he’s still firing away and making this a fight. Kudos to him. This is pure heart and toughness.

He forces a clinch and makes Powell work early, but they separate almost immediately, and Powell is right back to work with the pinpoint strikes.

Baker hits the canvas, but it’s unclear if it was intentional, as he’s right in on a kneebar before transitioning to a toe hold. It’s not there, but Baker’s setting up a calf slicer, putting Powell right back on the defensive.

Unfortunately for Baker, Powell appears wise to each attempt, and he’s avoiding any serious danger. One last Hail Mary heel hook attempt from Baker, but Powell escapes, and they’re back to their feet.

Now, Powell looks for two straight high kicks, but they miss. Another flying knee attempt from Powell, but Baker survives.

Powell almost certainly takes this fight on the scorecards, but Baker impressed everyone –– including the commentators –– with his ridiculous toughness in that one.

“He can take a punch,” Powell was heard saying after that one ended.

Yeah, that one was easy for the judges: