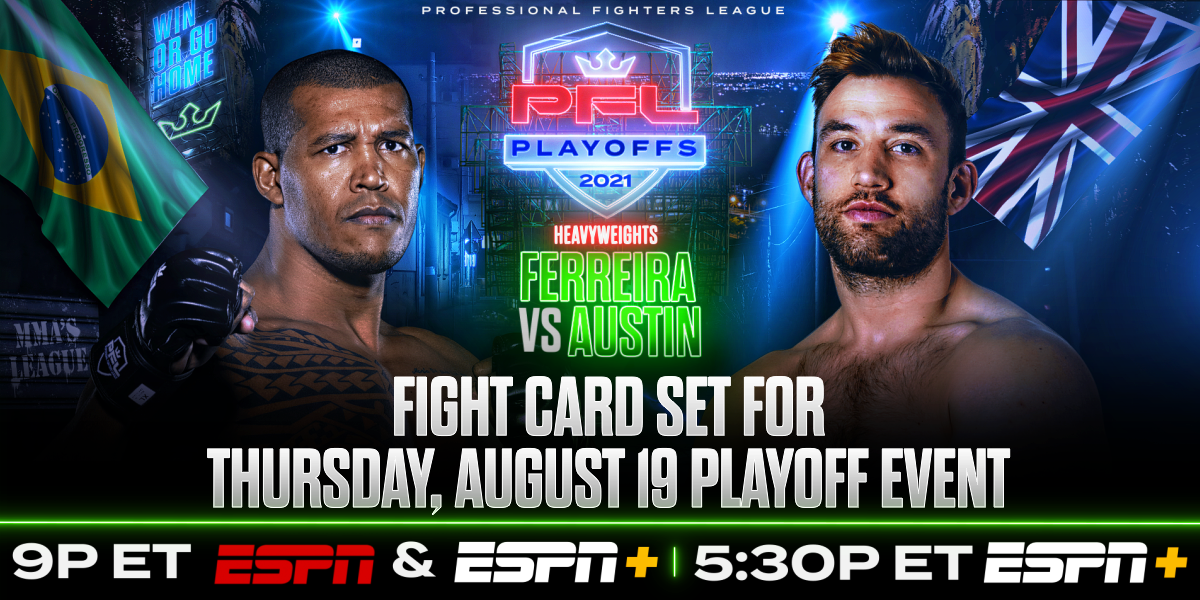 NEW YORK (August 3, 2021) – The Professional Fighters League (PFL), the fastest growing and most innovative sports league, has announced the card for its second Playoff event on Thursday, August 19 to be simulcast on ESPN and ESPN+. Fighters across the women’s lightweight and men’s heavyweight divisions will look to make it out of the final four and move one step closer to becoming a PFL champion and capturing $1 million in prize money.

“PFL’s second Playoff event on Thursday August 19 will feature an incredible and action-packed card that only the PFL can deliver to the 550 million MMA fans worldwide,” said PFL CEO Peter Murray. “These athletes are putting it all on the line to secure a spot in the PFL Championship. Nothing in sports compares to the intensity of a must-win scenario and each of these fights are must-win.”

Kayla Harrison, the 2019 PFL women’s lightweight world champion, will be looking to secure her spot in another PFL championship bout when she takes on the incredibly talented Genah Fabian in the main event. Top-seeded heavyweight Bruno Cappelozza will look to continue his knockout streak and to move on to the championship fight as he duels the hard-hitting Jamelle Jones in a must-see bout.

The final PFL Championship spots will be up for grabs when contenders from the featherweight and light heavyweight divisions compete at the third playoff event on Aug. 27 in primetime on ESPN2 and ESPN+.