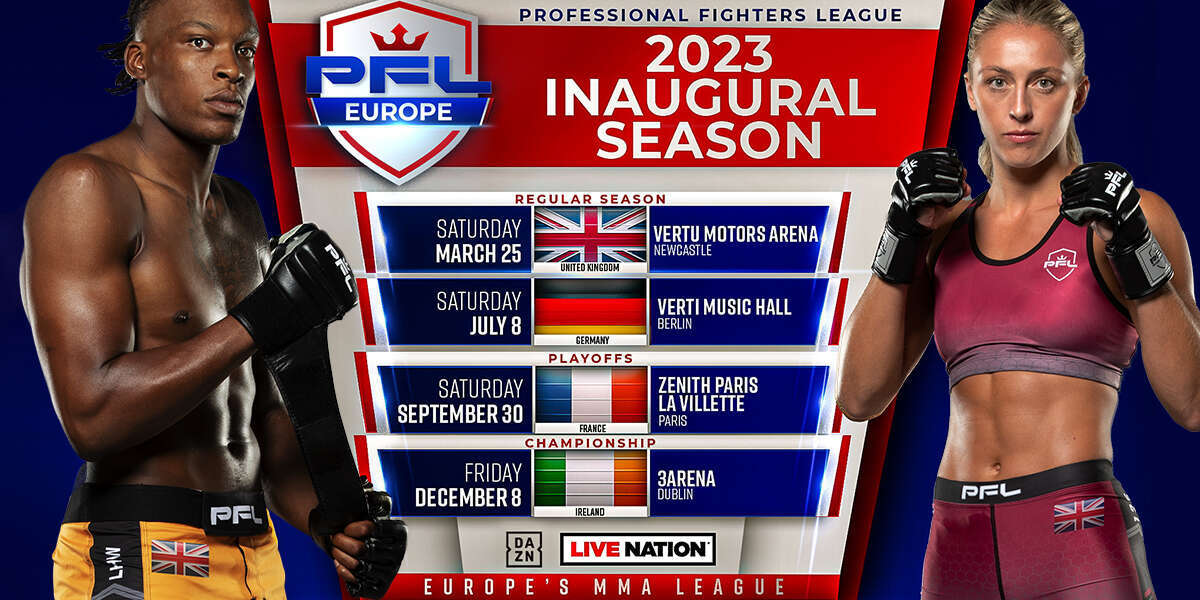 2023 PFL Europe Events To Be Held In Newcastle, Berlin, Paris and Dublin Distributed
On DAZN in select European and International Markets

NEW YORK (JANUARY 12, 2023) - The Professional Fighters League (PFL), the fastest growing and most innovative sports league, today announced the cities, venues and dates for the inaugural PFL Europe season in 2023 to be shown live on DAZN, the ultimate sports entertainment destination and global home of combat sports.

“PFL Europe’s inaugural season schedule is set, and MMA fans in 2023 will experience Europe’s best MMA fighters competing in the PFL’s true sport format live on DAZN,” said Professional Fighters League CEO Peter Murray. “PFL Europe Regular Season events will be staged in Newcastle, UK in March, and Berlin, Germany in July. Semifinalists will then compete in a single elimination Playoff event in Paris, France, in September with the winners advancing to the PFL Europe Championship in Dublin, Ireland in December.”

Shay Segev, DAZN Group CEO, said “DAZN’s partnership with the PFL is as exciting as it is innovative. It delivers yet more great content on our platform as we continue to develop our reputation as the global home of combat sports and the ultimate destination for sports fans. Working with rights holders, like the PFL, we can help them grow and develop their sports by reaching new and global fan-bases as well as developing a rich, immersive and digital experience the new generation of sports entertainment demands. The PFL understands this, and we look forward to bringing what promise to be an enthralling series to millions of our subscribers and engaging with many more.”

With an event taking place every quarter throughout 2023, the groundbreaking new concept will feature 32 of Europe’s top ranked fighters competing across four weight classes. “Win and advance; lose and go home” after four events, four Champions will be crowned all taking home $100,000 and a chance to earn a spot in PFL $1 million global season.

All four events will air during local prime hours live on DAZN, a founding partner of PFL Europe.

PFL is the #1 fastest growing company in MMA and the #2 MMA company on worldwide basis. PFL is the only in MMA with the sports-season format, where individual fighters compete in sports-season “win and advance” meritocracy like all other major sports. The PFL fighter roster is global and world-class, with fighters from over 20 countries and 25% independently ranked in the top 25. PFL leads in technology and innovation, with its proprietary PFL SmartCage powering real-time betting and next-gen viewing experience. PFL is aired primetime live in the U.S. on ESPN and ESPN+ and in 140 countries via 25 leading broadcast and streaming partners.

About Professional Fighters League:
Professional Fighters League (PFL) is the fastest growing and most innovative sports league.  PFL is the #2 MMA company worldwide on all key metrics and the only with the sports-season format where individual fighters compete in Regular Season, Playoffs, and Championship.  The Company has four global live fight franchises:  PFL League Season, PFL Challenger Series, PFL PPV Super Fights, and PFL Europe.

PFL airs live in the U.S on ESPN and ESPN+ and is broadcast and streamed to 140 countries with 25 international leading media partners, including DAZN, DirectTV, Viaplay, Sky Sports, and MBC.  PFL has dozens of major brand sponsors such as Anheuser-Busch, GEICO, Bose, US Marine Corps, and Celsius Energy Drink.

MMA is the growth sport of this decade, with over 600 million fans worldwide, the youngest audience demo of any sport, and true global revenue streams.

About DAZN Group:
DAZN is a leading sports platform in Italy, Spain, Germany, Japan, Canada, US and the UK.  Its wide range of exclusive content includes top-flight football from the world’s most popular competitions – Bundesliga, English Premier League, JLeague, LaLiga, Serie A, and the UEFA Champions League, in addition to the biggest sports from around the world - Formula 1, NFL, NBA, MotoGP and the UFC.  DAZN is a global home for boxing and combat sports through its partnerships with Matchroom Boxing the Professional Fighters League, and a global home for Women’s Football with UEFA Women’s Champions League and Finetwork Liga F.  DAZN is adding more and more sport to its platform to create a destination for sports fans.

DAZN is reimagining the way people enjoy sport. With a single, frictionless platform, sports fans can watch, bet, play, share, socialise, and buy tickets, NFTs and merchandise. Live and on-demand sports content, anywhere, in any language, on any device – only on DAZN.

DAZN is available on most connected devices including smart TVs, set-top boxes, streaming sticks, smartphones, tablets, PCs and game consoles.  DAZN can be accessed on Samsung, LG, Sony and Panasonic Smart TVs and on Games Consoles including Playstation and Xbox. Subscribers also have access to DAZN on their Amazon Fire TV, Amazon Fire TV Stick, Google Chromecast and Apple TV and find the app on their iPhone, iPad, android and mobile.