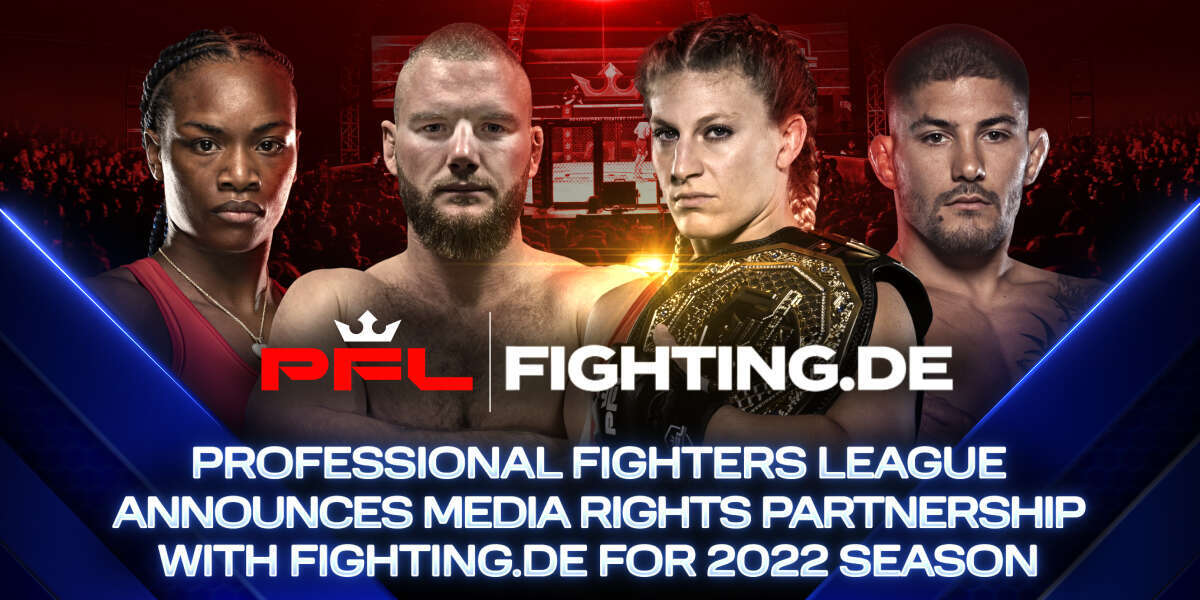 NEW YORK (February 11, 2022) - The Professional Fighters League (PFL), the fastest growing and most innovative sports league, and FIGHTING.de have announced an exclusive broadcast partnership for 2022. Spearheaded in conjunction with Athletic Sports Group and its subsidiary Fight Globe, FIGHTING.de will become the exclusive PFL content provider in Germany as well as Switzerland and Austria.

FIGHTING.de will carry both the inaugural PFL Challenger Series and the entire 2022 PFL Season live, with two of the 2022 PFL Playoff events to air live in primetime in the Central European Time zone. Additionally, FIGHTING.de will bring MMA fans pre- and post-event coverage, as well as exclusive PFL content including archival season footage from 2019-2021.

Joining the PFL’s world-class roster for the 2022 Regular season are German nationals Saba Bolaghi, who will compete in the ultra-competitive Featherweight division, and Hatef Moeil, who joins the hard-hitting Heavyweight division.

Additionally, Light Heavyweight Alexander Poppeck and Women’s Lightweight Julia Dorny will take part in the upcoming PFL Challenger Series. Each has the opportunity to represent Germany on a global stage as they aim to earn a Regular Season contract with the league and pathway to the $1 million prize.

“The Professional Fighters League is pleased to expand our global footprint and partner with FIGHTING.de as our broadcast partner in Germany, Switzerland and Austria for the 2022 Challenger Series and Regular Season,” said PFL CEO Peter Murray. “MMA fans in those countries can look forward to unparalleled action featuring world-class competitors, unique format and year-round coverage of their favorite fighters.”

Michael Ortlepp, CEO of FIGHTING.de, said, “We are very excited about the partnership with PFL and to broadcast the most exciting MMA tournament in the world live on FIGHTING.de. Fans in Germany, Austria and Switzerland can look forward to top-class action and highly exciting fights. Our particular focus will be of course be on our German representatives Saba Bolaghi and Hatef Moeil, which we will accompany intensively on their way during the regular season 2022 and Alex Poppeck and Julia Dorny in the Challenger Series. What can be more exciting than to watch the best fighters in the world fighting for a million dollars?”

Following a breakthrough year that saw 100 percent audience growth, PFL has accelerated its momentum in the early part of 2022 with a multi-year renewal with ESPN, generating global recognition around the upcoming Challenger Series, and adding several leading brands to its blue-chip sponsorship portfolio including Bud Light, Air Force Reserve and BetMGM. The PFL is the only MMA promotion to offer a true sport-season format, with fighters competing in a Regular Season, Playoffs and Championship, resulting in winners of each of the six weight classes being crowned a PFL World Champion and earning $1 million.

Professional Fighters League is the No. 2 MMA company globally and features an elite talent roster with 25 percent of its fighters independently ranked in the top-25 of the world, including 2021 PFL champions Kayla Harrison, Ray Cooper III and Movlid Khaybulaev. With live event coverage in 160 countries on leading distribution platforms, a portfolio of blue-chip brand partners, and backing from major institutional and high-profile individual investors, PFL is accelerating its global expansion to deliver a unique, innovative product to the more than 600 million MMA fans globally.

PFL is primetime in the U.S on ESPN and ESPN+ and was broadcast and streamed live worldwide last year to 160 countries with partners including RMC Sport, FPT, Globo, Sky Sport, Eleven Sport, and more. The PFL roster is world-class, with 25% of PFL fighters independently ranked in the top 25 in the world. The PFL proprietary SmartCage data and analytics platform powers real-time betting and provides next-gen viewing experience.

FIGHTING.DE produces fighter portraits, fight analysis and exclusive interviews with German and international stars and newcomers. Over 150 live events per year and the weekly podcast “Schlagwort” make FIGHTING.DE the leading Martial Arts brand in German MMA. Hosts and
experts Mark Bergmann and Andreas Kraniotakes are the faces of FIGHTING.DE and have become ambassadors of German MMA.