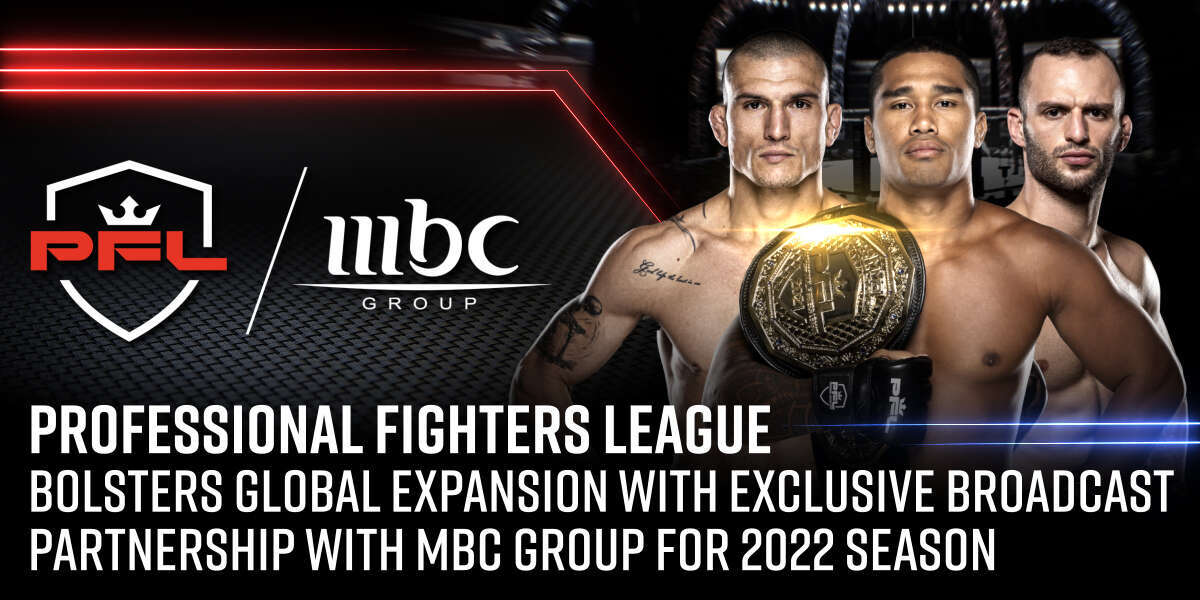 NEW YORK (March 30, 2022) - The Professional Fighters League (PFL), the fastest growing and most innovative sports league, and MBC GROUP – the largest and leading media company in the Middle East and North Africa (MENA) – today announced an exclusive broadcast partnership for 2022. Under the agreement, MBC GROUP will become the exclusive PFL content provider in the MENA region, carrying the inaugural Challenger Series as well as the Regular Season, Playoffs and World Championship.

Former world champion and Jordanian MMA star Jarrah Al-Silawi earned a TKO victory in his PFL debut at the 2022 Challenger Series, earning a contract for the upcoming Regular Season where he’ll look to continue the momentum against the highly competitive welterweight division.

“The Professional Fighters League is excited to announce our exclusive broadcast partnership with MBC GROUP to deliver our premium MMA product to fans in the Middle East and North Africa,” said PFL CEO, Peter Murray. “The PFL has a world-class roster of talent and innovative format that we’re looking forward to showcasing in what will be our biggest season yet.”

Ashraf Younis, Director of MBC ACTION, added: “MBC GROUP is thrilled to partner with PFL to bring this exciting league to MMA fans and enthusiasts in the MENA region via MBC’s diverse portfolio, including MBC ACTION and our streaming service, Shahid VIP. This also forms part of our mission to build on and expand our sports offering in the region.”

The deal was developed in partnership with Athletic Sports Group and its subsidiary Fight Globe, the world’s largest combat sports distributor.

Through the agreement, fans in the MENA region will have access to the world’s best fighters and highly anticipated 2022 slate of action.

PFL is the first and only MMA league with a true sports-season format where elite fighters from around the world compete in a Regular Season, Playoffs and Championship. The four competitors in each division who earn the most points in the Regular Season advance to the win-or-go-home Playoffs, followed by the biggest night in MMA – the PFL World Championship – with each winner going home with the $1 million prize.

Following a breakthrough year that saw 100 percent audience growth, PFL has accelerated its momentum in the early part of 2022 with a multi-year renewal with ESPN, generating widespread buzz around the Challenger Series on fuboTV, and adding several leading brands to its blue-chip sponsorship portfolio.

Professional Fighters League is the No. 2 MMA company globally and features an elite talent roster with 25 percent of its fighters independently ranked in the top-25 of the world, including 2021 PFL champions Kayla Harrison and Ray Cooper III. PFL has live event coverage in 160 countries on leading distribution platforms and delivers a unique, innovative product to the more than 600 million MMA fans globally.

About MBC Group
MBC GROUP is the largest and leading media company in the Middle East & North Africa region that enriches people’s lives through information, interaction and entertainment. In 2002, nearly a decade after the launch of MBC1 in London, in 1991, MBC GROUP moved its headquarters to Dubai Media City, United Arab Emirates.