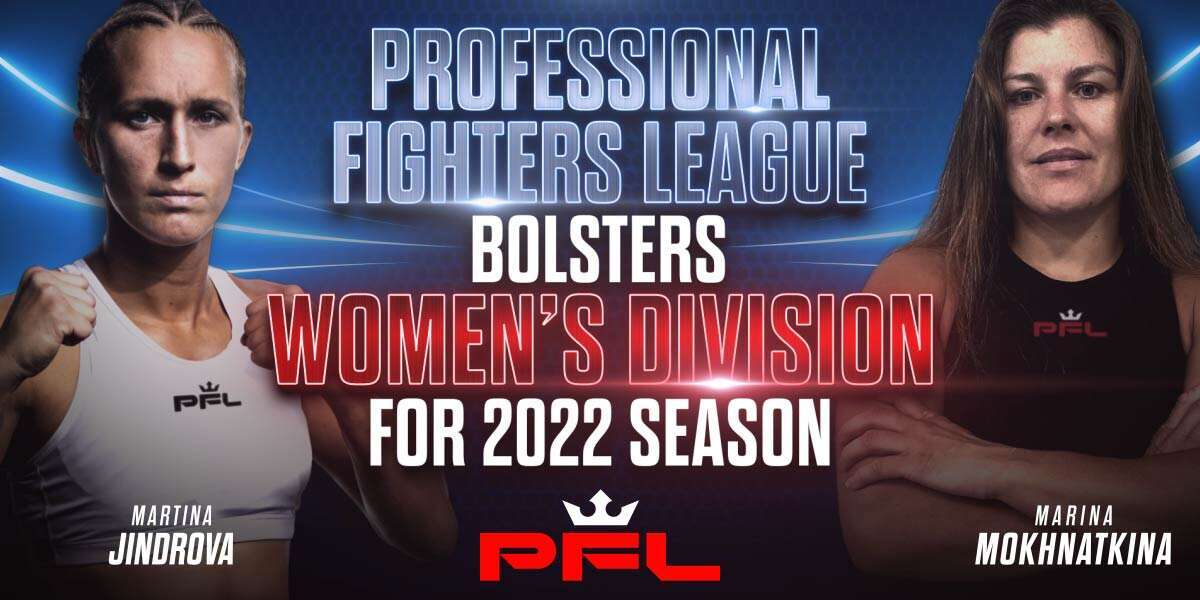 Marina Mokhnatkina and Martina Jindrova will Compete at 155 lbs.
in the League’s Next Season

NEW YORK (July 28, 2021) — The Professional Fighters League (PFL), the fastest growing and most innovative sports league, today announced the signings of two women for their lightweight division. Marina Mokhnatkina and Martina Jindrova will be joining the lightweight division alongside 2019 PFL champion and two-time Olympic gold medalist Kayla Harrison and will look to take a shot at the $1 million World Championship top-prize come 2022.

Mokhnatkina hails from Russia and has an extensive background in Sambo and is a six-time world champion, two-time European champion and eight-time Russian champion. The 33-year-old is a veteran of MMA with seven professional bouts and an impressive 5-2 record. She has competed in both Fight Nights Global in her home country as well as Bellator in the United States.

Jindrova, 30, is a striker from the Czech Republic who has competed all around the world in both Muay Thai and kickboxing. She is a former ISKA K-1 kickboxing champion and four-time Czech national kickboxing champion. She made her move to MMA in 2018 and has an unblemished 3-0 record as a professional.

The PFL is home to the best women's lightweight fighters in the world. Mokhnatkina and Jindrova join the league facing heavy competition from two-time Olympic gold medalist and 2019 PFL champion Kayla Harrison, who finished both her opponents in the first round with little resistance. The division also features knockout artist Larissa Pacheco, who, during the regular season, posted devastating knockouts over Julija Pajic, in just 51 seconds and Olena Kolesnyk which ended up being a ESPN’s SportsCenter top 10 play of the day.

“We are very excited to bring two women of this caliber into our women’s lightweight division,” said PFL President of Fighter Operations Ray Sefo. “The goal has been to elevate our roster each year and that will be the case once again in 2022. These signings, along with others we already have in the pipeline will show the commitment we have to building an even stronger roster for the coming Season.”