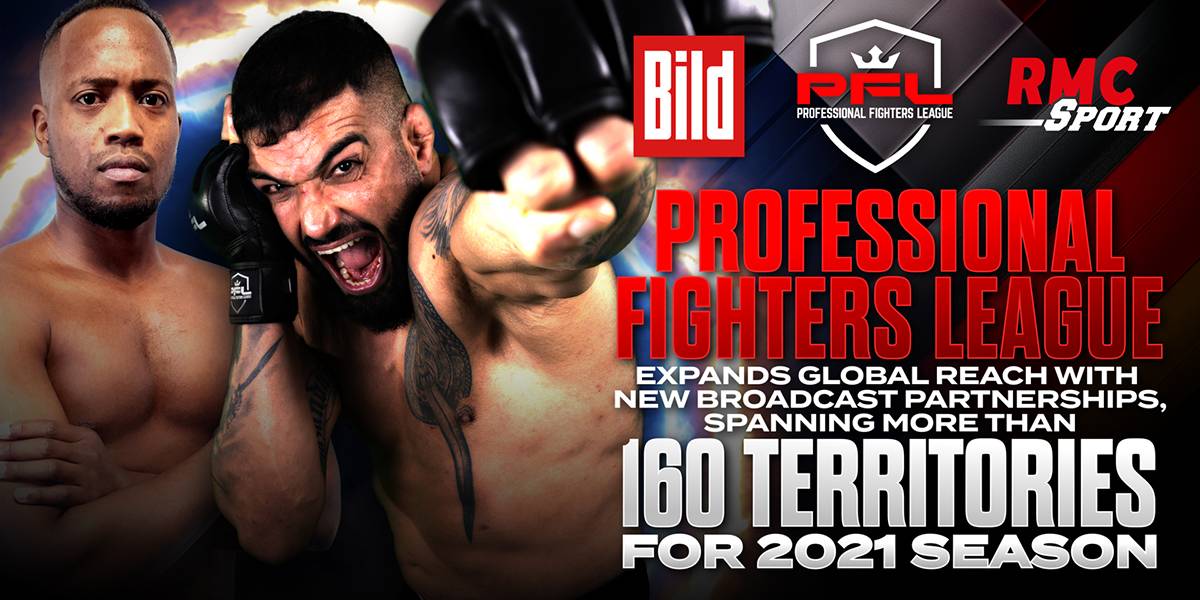 NEW YORK (April 21, 2021) – The Professional Fighters League (PFL), the fastest growing and most innovative sports league, today announced expanded global broadcast coverage for its 2021 season, which will feature an immersive experience for fans around the world.

To showcase the first and only MMA league to present the sport in a true season format, PFL has added two new premium media networks in key territories, including Bild in Germany and RMC Sport in France. The networks will carry each PFL event across the Regular Season, Playoff and Championship, and viewers in those countries – as well as MMA fans around the world – will be able to enjoy the unmatched broadcast and streaming production.

As part of the agreement, Bild and RMC Sport will be the exclusive providers in Germany and France respectively, for all PFL programming and content for all platforms including television, digital and mobile domestically. The networks will also feature classic fights from PFL’s vault and provide fans with the opportunity to purchase official PFL gear.

“Our distribution partnerships with Bild in Germany and RMC in France represent the growing demand around the world for the PFL’s 2021 season live events and content,” said Peter Murray, CEO of the Professional Fighters League (PFL). “Come this Friday April 23, MMA fans in Europe and throughout 160 countries will experience MMA 2.0, as the PFL is the future of the sport with star athletes, a win and advance season format and our new SmartCage experience.”

With the growing popularity of MMA in Europe, PFL has expanded its footprint on the continent recently with broadcast partnerships and the recent signing of two-time French Olympian, Cynthia Vescan and German superstar fighter Hatef Moeil.

PFL has quickly established itself as the no. 2 MMA company in the world with distribution on ESPN networks and streaming platforms in the U.S. and to more than 160 countries via premium sports networks and platforms and has experienced tremendous YoY growth across digital channels – 68% follower increase on Instagram, 30% total audience growth across digital, and a 200% social engagement spike.

About Professional Fighters League
Professional Fighters League (PFL) is the first and only league to present MMA in the sports-season format where individual fighters compete in Regular Season, Playoffs, and Championship. PFL is the innovation leader with the PFL SmartCage delivering viewers on-screen fight analytics and real-time prop bets. PFL Roster is second to none with 25% of its fighters ranked in the top 25 in their weight-class. All PFL 2021 Season events are live in primetime on ESPN2/ESPN+ in the U.S. (typically on Thursdays), as well as on leading broadcast and streaming outlets in 160 countries worldwide.