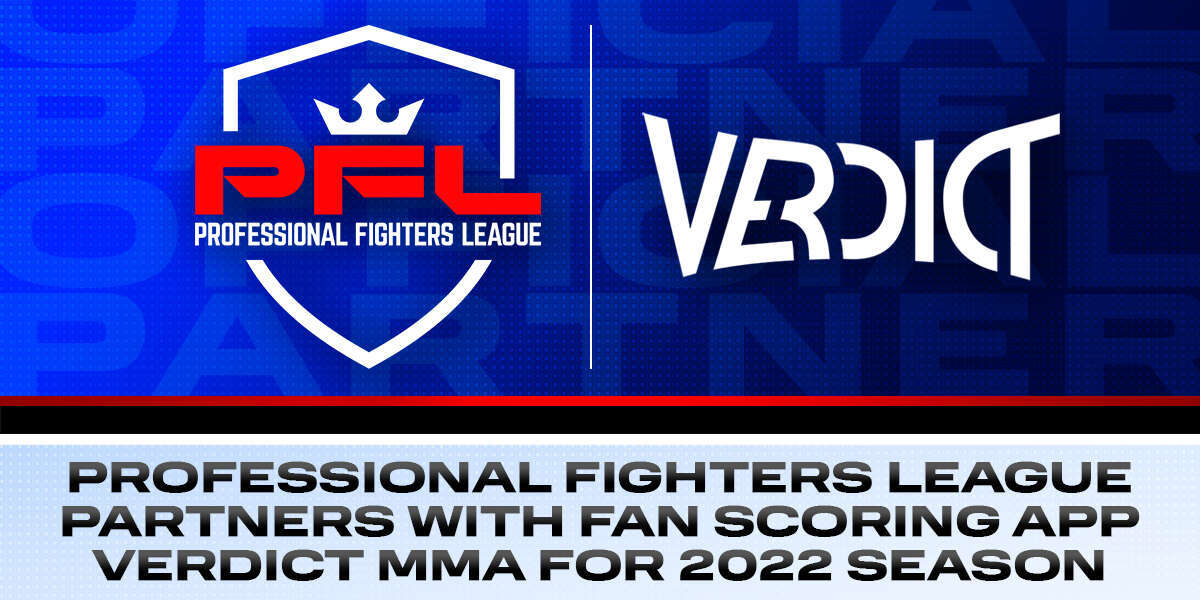 Fans will be able to score fights in real time; global scorecard data will be
integrated into PFL broadcast

NEW YORK (APRIL 18, 2022) – The Professional Fighters League (PFL), the fastest growing and most innovative sports league in the world, today announced a partnership with Verdict MMA, the first ever global fight scoring and prediction app, for the 2022 Season. Combat sports fans around the world will be able to add round-by-round scoring for the main card bouts which will be integrated into the broadcasts on ESPN networks and streaming platforms.

This marks the second consecutive year PFL will partner with Verdict to deliver a premium experience to fans across the globe and let their voices be heard through the television broadcast. Verdict MMA offers the fight community the ability to engage with one another before, during and after bouts by predicting fight outcomes, live scoring of the action and enabling lively post-fight debate.

Verdict has since raised a seed round to bring further innovation, alongside the PFL, to the MMA space. They’ve since launched bespoke editorials on their website and have worked with familiar names. The Verdict app continues to top the charts during fight nights. They’re looking to enhance the MMA viewing experience even more with a big release in the near future.

“Our extended partnership with an innovation leader such as Verdict represents the PFL’s commitment to giving fight fans around the world premium MMA experiences,” said PFL CEO Peter Murray. “Their cutting-edge technology brings audiences closer to the action than ever before and allows them to have an active role in each PFL Season event.”

“The PFL is committed to giving fight fans the best fight night experience — a perfect symbiotic relationship given both of our missions. Our partnership speaks volumes about their willingness to innovate in all details of their broadcast. We’ll be bringing much more to our platform this year for the PFL. We’re absolutely thrilled for the 2022 season.” said Verdict CEO Sanjay Thakur.

Following a breakthrough year that saw 100 percent audience growth, PFL returns to Regular Season action on April 20 as elite fighters across the Lightweight and Light Heavyweight divisions will face off in the PFL SmartCage.

Professional Fighters League is the No. 2 MMA company globally and features an elite talent roster with 25 percent of its fighters independently ranked in the top-25 of the world, including 2021 PFL champions Kayla Harrison and Ray Cooper III. PFL has live event coverage in 160 countries on leading distribution platforms and delivers a unique, innovative product to the more than 600 million MMA fans globally.

About Verdict
Verdict “Home of Combat” is the #1 fight night companion available on iOS and Android.  Verdict is on a mission to increase engagement of the MMA viewing experience. Primarily, using innovative data collection methods that are shared with the community through their apps.

They’re increasing transparency within the MMA community and its thoughts by aggregating crowd-sourced data and sharing it back. By leveraging a user focused design they're bringing fight data to the community's finger tips.

Verdict is used in over 163 countries and has been featured on a variety of publications.