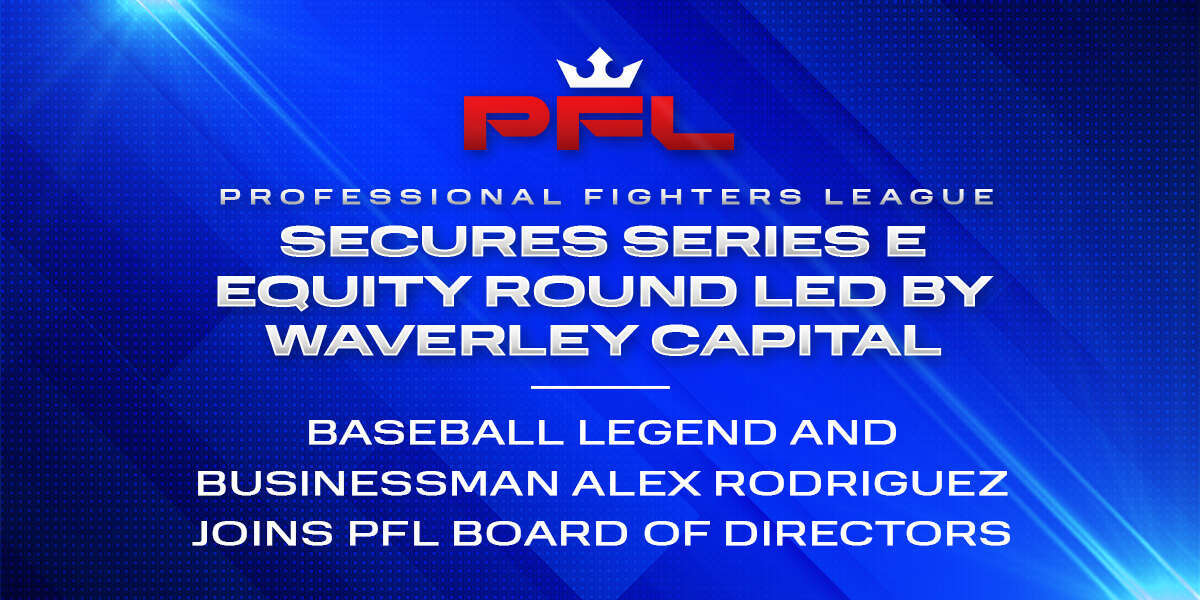 NEW YORK (May 19, 2022) - The Professional Fighters League, the fastest growing and most innovative sports league, today announced the completion of a $30 million Series E equity round to fund global expansion and launch its new PPV Super Fight Division.  The Series E funding round was led by Waverley Capital, the media and digital focused venture capital firm co-led by Edgar Bronfman, Jr. and Daniel Leff.  Baseball legend and businessman Alex Rodriguez also invested.  As a result of the financing, both Alex Rodriguez and Daniel Leff have joined the PFL Board of Directors.

MMA is the fastest growing sport, and has the third largest worldwide fan-base with 600 million global fans.  PFL is the #2 MMA company worldwide by all key metrics, including distribution reach, broadcast and streaming audience per event, and fighter roster quality.  The PFL talent roster is world-class, with 25% of the fighters independently ranked in the top-25 of their respective weight class, including 2x PFL Champions Kayla Harrison and Ray Cooper III, former Bellator Champions Rory MacDonald and Julia Budd, and former UFC Champion Anthony Pettis.

PFL is a global platform company, providing live MMA fight events year-round. The PFL League has top world-ranked fighters compete in a 10 event schedule in the sports-season format, all live primetime on ESPN and ESPN+.  The PFL Challenger Series is an 8 event schedule, where emerging pro fighters compete to earn a contract in the PFL League Season, and is featured live on FUBO TV.  All PFL fight events are broadcast and streamed worldwide to 160 countries via dozens of leading media distribution partners.

“While it is clear that sports is the most valuable content and intellectual property in the world, what is also becoming increasingly clear is that MMA is the growth sports business of this decade,” said PFL Founder and Chairman Donn Davis.  “The MMA category is on fire, and while UFC is the first winner in this market, several major valuable companies will be built, and PFL has secured the #2 market position and is the fastest growing and most innovative company in MMA.”

“With this new capital, PFL is open for business to sign the biggest MMA star fighters in the world to our new PPV Super Fight Division,” said PFL CEO Peter Murray, “Just as we changed the game with our league season format, we will now disrupt the long-overdue pay-per-view business for the benefit of fighters by partnering to make them major participants in the revenue of their own fights.”

“I love the global reach of MMA,” said Alex Rodriguez. “The PFL continues to build and innovate for fans, media, and fighters and there is massive demand in the marketplace.”

“Content is always king, and sports content is the king of kings,” said Edgar Bronfman, Jr. Co-Founder and Co-Head of Waverley Capital. “Within sports the most scarce content is MMA, and we see PFL as the premium innovative provider for this generation of global fans.”

“PFL is a global platform company that is at the intersection of all key media and consumer trends,” said Daniel Leff, Co-Founder and Co-Head of Waverley Capital. “PFL fights are high action with global athletes, ideal for the age of streaming and mobile, and have the youngest demographic across all sports, a perfect fit for sponsors.  The PFL SmartCage is data-rich, propelling engagement and gaming, and the company centrally owns all its intellectual property, allowing it to facilitate new revenue ranging from NFTs to licensing.”

PFL League is primetime in the U.S. on ESPN and ESPN+ and broadcast and streamed worldwide to 160 countries with over 25 media distribution partners including Channel 4, DirecTV, RMC Sport, Eurosport, Sky Sports.  PFL Challenger Series is live on FUBO TV in the U.S.  The PFL fighter roster is world-class, with 25% of PFL fighters independently ranked in the top 25 in the world.  The PFL proprietary SmartCage data and analytics platform powers real-time betting and provides next-gen viewing experience.