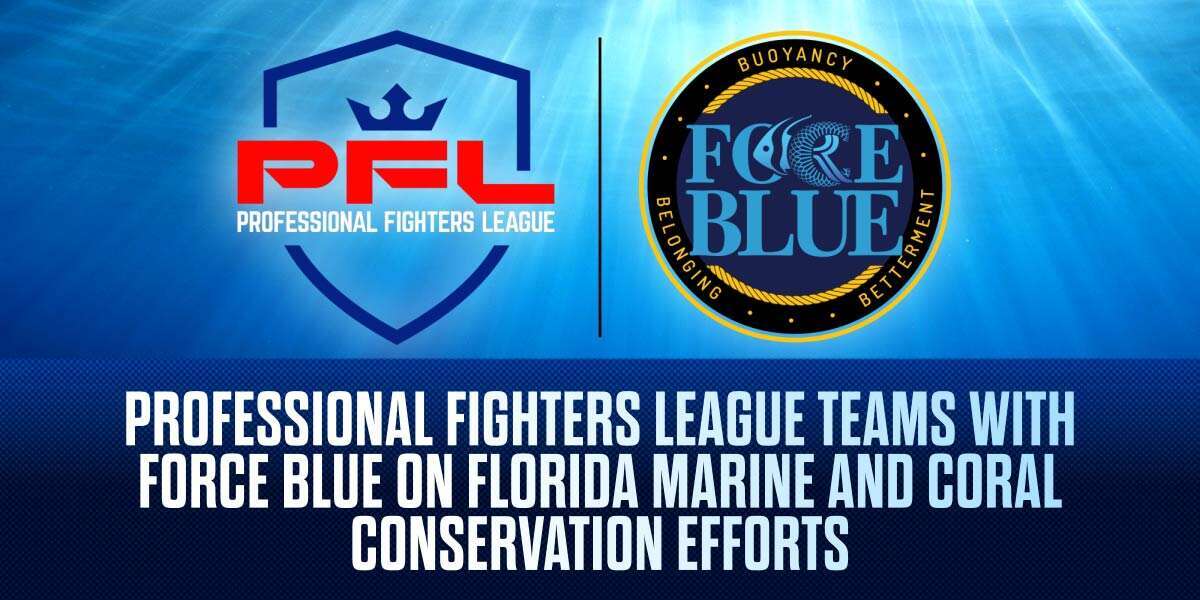 PFL Fighting In And For Florida During The 2021Playoffs

Tickets On Sale For PFL World Championship On October 27

NEW YORK (August 17, 2021) - The Professional Fighters League (PFL), the fastest growing and most innovative sports league, today announced they will team with Force Blue, a non-profit organization that retrains and redeploys former Special Operations veterans and military-trained combat divers, to assist in marine and coral reef conservation efforts in South Florida where PFL is currently hosting its 2021 Playoffs. This includes a coral spawning recon offshore Key Biscayne, FL, as well as a coastal conservation beach cleanup operation at Lauderdale-By-The-Sea.

On August 20th, PFL CEO Peter Murray and Executive Producer George Greenberg, as well as MMA legend and former U.S. Army Sergeant Randy Couture, will take part in a boat dive from Crandon Park Marina, in Key Biscayne, Florida.  Force Blue and PFL divers will head to the 100 Yards of Hope site with members of the University of Miami Rosenstiel School. The objective will be to scout the site for mature coral colonies, mapping, and trap removal.

Efforts to preserve the Florida coastline will continue on August 23rd with a coastal conservation beach-cleanup operation at Lauderdale-By-The-Sea. Force Blue, PFL athletes and employees, veterans and MMA fans will lead a beach cleanup as well as an off-shore dive with more than 100 volunteers to both monitor the coral and perform a fish count.

“The PFL is grateful to showcase our three Playoff events throughout August as well as our PFL World Championship in October at the Hard Rock Live at Seminole Hard Rock Hotel & Casino in Hollywood, FL.,” said PFL CEO Peter Murray. “It is our duty to give back to the community and it’s our pleasure to work with a first-class organization like Force Blue and help make an impact for our environment and the beautiful state of Florida.”

“The PFL is excited to showcase our upcoming Playoff events on August 19 and 27 and the PFL World Championship on October 27 at the Hard Rock Live at Seminole Hard Rock Hotel & Casino in Hollywood, FL.,” said PFL CEO Peter Murray. “As an organization, it is our pleasure to partner with Force Blue to support their mission in uniting the Special Operations veterans community with the world of marine conservation as well as give back to the South Florida community.”

“We’re honored to be joining forces with the Professional Fighters League with our efforts to help keep Florida clean,” said Jim Ritterhoff, Executive Director and Co-Founder of Force Blue, Inc. “The PFL and Force Blue share a common belief in fighting to save our world, but more importantly, it’s a fight that we all can partake in.”

About Force Blue, Inc.
Force Blue is the only nonprofit in the world that provides "mission therapy" for former combat divers by retraining, retooling and deploying them on missions of conservation, preservation and restoration. By uniting Special Operations veterans with the world of marine science and conservation Force Blue has created a model of caring, cooperation and positive change with the power to restore lives and the planet. For more info visit forceblueteam.org.