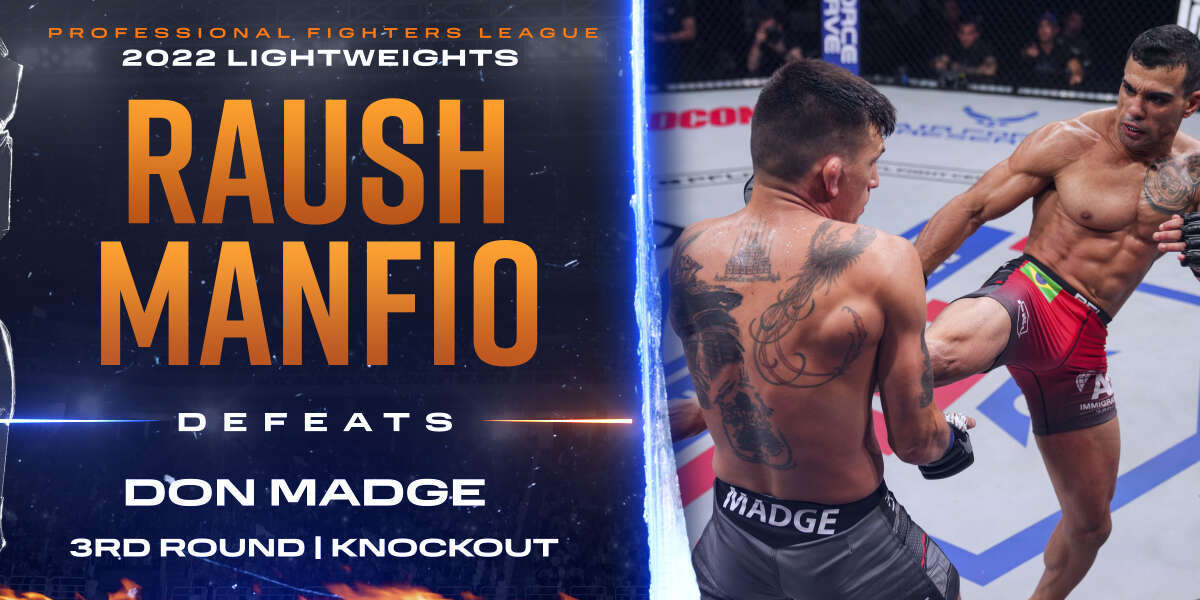 Co-main already, time flies when you’re having fun as they say!  Magic Man Don Madge takes on reigning 2021 PFL Lightweight champ Raush Manfio in a super intriguing match-up.  Madge went undefeated in the UFC before being cut because of visa issues, while Manfio was ready to walk away from MMA last year before making the PFL Season as an alternate and ultimately winning the title and the million dollars that comes with it. 2 great stories and 2 great fighters, this should be a fun one!

Neither guy landing anything too nasty early on.  Raush tends to be more of a counter striker and likes to find his timing and reads, while Madge seems content to lead the dance for now.  Madge throwing a lot of low kicks early, but he would do well to disguise them a bit or at least throw something before or after.

Madge appears to have a slight speed advantage and is slightly out landing Manfio halfway through the round.  It does feel like Manfio is measuring and downloading information while he waits for his opening.

3 minutes into the fight and Madge is winning mostly on volume, but Manfio lands a powerful left hook right on the chin that earns Madge’s respect and was more than likely the most significant strike of the round for either fighter so far.

Madge lands a nice straight left and is finally starting to set up those low kicks a little, throwing them on the end of his straight punches.

Manfio lunges in with a left hook but can’t connect and Madge touches him on the way out for good measure.  Manfio is eventually going to have to pick up the volume if he wants to win this fight on the scorecards.

Neither fighter did a ton of damage but Madge threw and landed significantly more volume.  Let’s see if Manfio makes some adjustments and comes out swinging in the second.

The second round begins and already Manfio appears ready to up the volume and lead the dance a little bit.  Madge throws a combo moving forward but I’m not sure anything actually connected.

Manfio is starting to do a good job timing up those leg kicks with his jab and beating Madge to the punch.  90 seconds in and Manfio definitely looks better than he did in the first.

They clinch and Madge lands a big body kick on the break.  Manfio seems to be having a bit of difficulty with that body kick and it looks like Madge wants to use that to set up the high kick as the fight goes on.

Madge is starting to feint low and throw high in an effort to get Manfio to drop his right hand and open up that high kick but Manfio seems wise to it.  Madge is keeping the volume high and making it hard for Manfio to really get anything going so far.

As the round winds down, Manfio lands a nice hook combo and kick.  They reset and Manfio partially lands a nice overhand right.  Better round for Manfio, but he will more than likely need a finish at this point.  Very interested to hear his corner and see how he comes out to start the 3rd.

Our final round begins and Manfio appears to be fighting a bit more urgently after his corner let him know he can’t wait for Madge to come to him.

Madge is doing a phenomenal job using his kicks to keep Manfio from closing distance and getting in the pocket where he really excels.

OH! Big left from Madge stumbles Manfio backwards, but he recovers quickly.  Madge has to be careful to not get drawn into a firefight with 2 rounds in the bank, but respect to him for not fighting conservatively and still looking for a finish.

JUST LIKE THAT! Manfio comes forward and SMOKES Madge with an overhand right directly on the chin and that’s an early candidate for a comeback of the year for the reigning champ!

And that is why MMA is the greatest sport in the world baby! Down 2 rounds, having trouble putting offense together, and Manfio just absolutely nukes Madge and that’s a wrap, what an incredible finish. 4 points for the War Horse.