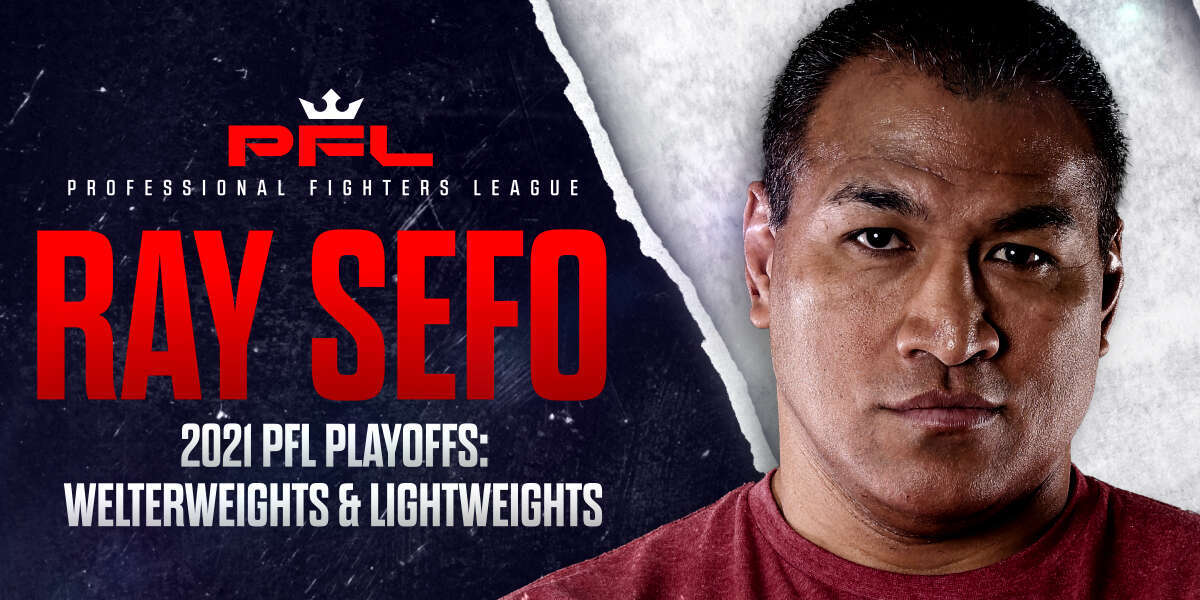 Ray Sefo’s Breakdown of the 2021 PFL Playoffs: Welterweights and Lightweights

Friday, Aug. 13, welterweights and lightweights take center stage at PFL Playoffs 1 to make their push toward the biggest night in MMA: The $6 million PFL World Championship.

The first of three consecutive win-or-go-home weeks of PFL Playoffs action, Friday’s event features a can’t-miss welterweight main event between Ray Cooper III and Rory MacDonald. This No. 3 vs. No. 2-seed matchup has been highly anticipated since MacDonald signed with the promotion in 2019, and now we all get to see the action unfold live on ESPN2.

A former Bellator champion and UFC title contender, MacDonald is unquestionably one of the best 170-pound fighters on the planet. To punch his ticket to the 2021 PFL Playoffs, MacDonald submitted Curtis Millender then dropped a controversial split decision to Gleison Tibau.

Cooper, meanwhile, needs no introduction to PFL’s fans and followers. He took home PFL gold and $1 million by winning the 2019 Welterweight Championship, and now he’s looking to repeat and add another seven figures to his bank account.

One of the most violent finishers in all of MMA, Cooper boasts 14 knockouts in 22 career wins, making him a significant threat to MacDonald – and anyone else on the planet – on fight night.

Before Cooper and MacDonald jump into the cage, though, the PFL Playoffs 1 card brings plenty of intrigue to the table. The ESPN2 fight card kicks off with a Lightweight Semifinal rematch between No. 1 seed Loik Radzhabov and No. 4 seed Alexander Martinez.

Back in April at PFL 1, 2021, Martinez defeated Radzhabov via a controversial split decision, setting the stage for a high-drama affair Friday evening at Seminole Hard Rock Hotel and Casino.

Following that rematch, fans will be treated to a lightweight showdown between No. 2 seed Clay Collard and No. 3 seed Raush Manfio as well as a Welterweight Semifinal between No. 4 seed Magomed Magomedkerimov and No. 5 seed Sadibou Sy.

All that plus can’t-miss action from Olivier Aubin-Mercier, Tibau, Darrell Horcher, and more begins with the ESPN+ card, airing live at 5:30 p.m. ET. The broadcast then shifts at 9 p.m. ET for the ESPN2 card. For additional broadcast details, click here.

Now, let’s take a look at some of the matchups through the eyes of PFL President Ray Sefo, six-time world kickboxing and Muay Thai champion and three-time combat sports Hall of Famer.

Note: This post reflects the betting odds at the time of posting. Visit DraftKings, the official sportsbook of the PFL, for the latest odds.

A matchup many predicted for the 2021 PFL Welterweight Finals comes early, as Cooper and MacDonald throw down atop Friday night’s PFL Playoffs 1 card.

Cooper brings more raw aggression and power to the table, while MacDonald holds a significant edge when it comes to experience against top-level competition. Which will emerge victorious?

Ray’s Take: This is the type of fight everyone wants to see – myself included! When we stacked the Welterweight Tournament, we knew matchups like this would be possible, and now they’re here in the very first round of the 2021 PFL Playoffs.

Cooper vs. MacDonald has the makings of an instant classic. While MacDonald has fought the best in the world and has repeatedly showcased exceptional technical skill and fight IQ, Cooper’s power is the type of X-factor that can cause everything else to be thrown out the window. He can finish anyone  – MacDonald included – at any time.

If you say you know who’s going to win this one, you’re probably lying. All I know for certain is that it’s going to cap off the show in style. Do not blink.

The first Welterweight Semifinal features one of the most dominant welterweights in PFL history, Magomed Magomedkerimov, against dangerous Muay Thai and kickboxing specialist Sadibou Sy.

While Magomedkerimov continues to fly under the radar for many, his peers fully understand and appreciate his skill set. Check out what former UFC lightweight champion and MMA legend Khabib Nurmagomedov has to say.

Ray’s Take: Are people ready to talk about Magomed Magomedkerimov? I sure am. The Dagestani fighter is a perfect 9-0 inside the PFL cage, and only an unfortunate injury kept him from possibly claiming the 170-pound title back in 2019.  Not only does he win, he wins impressively, too. Look no further than his first-round Ezekiel choke of Curtis Millender back in June to punch his ticket to the 2021 PFL Playoffs.

Nobody’s figured out his game inside the PFL cage yet – but Sadibou Sy is the type of fighter who will leave you staring at the ceiling if you underestimate his skills. A devastating striker, Sy continues to round out his full MMA game, and the results shone brightly in June as he dealt with the pressure and grappling of Aleksei Kunchenko en route to a unanimous decision victory.

Can Sy keep Magomedkerimov at range and work his game or will the American Top Team product continue to dominate all comers?

Clay Collard has played the part of the underdog throughout his PFL career … and he just keeps winning anyway.

“The doubters still doubt me,” Collard recently said. “Like they did against all those undefeated prospects … being that underdog and being overlooked fuels a fire.”

Friday night at PFL Playoffs 1, Raush Manfio hopes he has the answers to extinguish that fire. Manfio lost the Titan FC lightweight strap against Sidney Outlaw in June of 2018 but bounced back with two impressive wins inside the PFL cage. Now, he finds himself in the hunt for the PFL Lightweight Championship – and the $1 million prize.

Ray’s Take: If anyone still underestimates Clay Collard, I have a simple question for them:

And not to be outdone, Manfio also defeated Lutterbach and Pettis en route to this Playoffs matchup, so it’s only fitting these two step into the cage to figure out whose game truly reigns supreme. Both of these men love to stand up and search for the knockout – something you all know I love to see.

Who will connect first Friday night?

The PFL Playoffs 1 fight card opens up on ESPN2 with a much-anticipated rematch between top seed Loik Radzhabov and No. 4 seed Alexander Martinez. Previously, Martinez got the better of Radzhabov, winning a split decision back in April, but Radzhabov bounced back with an impressive 27-second stoppage of Akhmed Aliev to secure the top spot.

Ray’s Take: I love to see how fighters respond to adversity. After losing a close split decision to Martinez at our April 23 show, Radzhabov could have played it safe just to lock up a few points in hopes of squeezing into the Playoffs.

Instead, Radzhabov came out firing, and he earned the fastest knockout in PFL lightweight history with a 27-second TKO instead. That shows what he’s made of – and he’ll need all that power and grit Friday night if he hopes to avenge his loss against Martinez.

A younger, slick fighter, Martinez has showcased both submission prowess and knockout power throughout his professional career, making him a threat wherever this one goes. This is the kinda fight I like to see kick off the show on ESPN2.