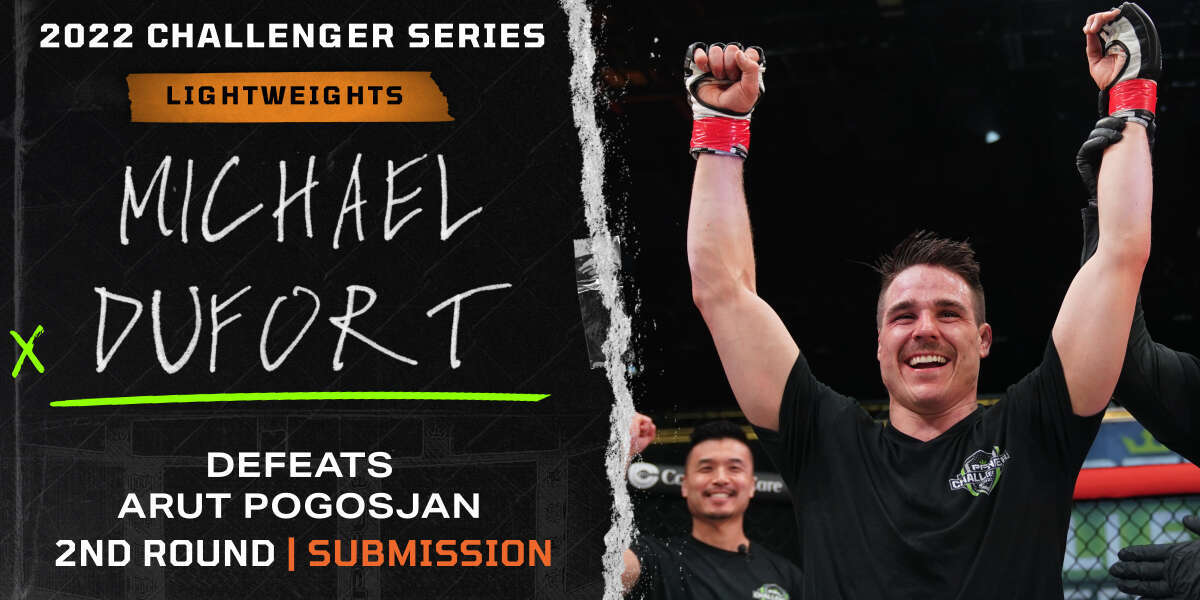 Following a dominant decision victory by Yanal Ashmouz to kick off Week 5 of the 2022 PFL Challenger Series, lightweights Michael Dufort and Arut Pogosjan took the cage.

Both men entered with a wealth of experience –– 12 pro fights apiece –– and both earned plenty of stoppage victories along the way.

Pogosjan registered two knockouts and two submissions in his nine wins, while Dufort stopped his opponent in all eight of his wins (two knockouts, six submissions).

Who will get it done under the bright lights of the PFL cage?

Dufort’s out with some serious aggression here, immediately taking the center of the cage. He pushes forward, and they clinch against the cage. Dufort’s all over Pogosjan here, relentlessly pursuing the takedown –– and he finally gets it.

They hit the ground, and Dufort has Pogosjan’s back instantly, locking in the figure-four. Now, he switches to an armbar, but Pogosjan defends well, slips out, and they’re back to the feet. That’s exactly what Pogosjan needed, and it looks like he knows it.

He’s picking up the pace here, landing some nice jabs and low kicks against Dufort. Nice straight right from Dufort gets Pogosjan’s attention. Huge counter left hook from Pogosjan finds the mark, and Dufort’s on the blitz.

Dufort put Pogosjan on his heels there, pummeling forward with strikes, and they’re back against the cage with less than a minute to go in Round 1. Dufort with another back take here, and the round ends there.

Pogosjan had his moments on the feet, but you gotta think that round goes to Dufort for the superior control and the constant threat of submission.

Power jab lands from Dufort and stumbles Pogosjan. Another blitz from Dufort, and he attempts to take the back once again –– but this time Pogosjan is ready. He flips his hips and takes top position in the scramble, going to work from inside Dufort’s guard.

Dufort scrambles, and they’re back up. Wild. Dufort is a wizard at taking the back. Pogosjan throws a hook, exposes his back, and Dufort is all over it. This time, he’s threatening with the rear-naked choke quickly, and Pogosjan’s fighting the hands.

But not for long.

The choke is in, and it’s tight. Pogosjan can’t escape this one. Another win, another finish for Michael Dufort.

With the submission victory, Dufort becomes a strong contender for the contract at night’s end. Will it go to him? Stay tuned…