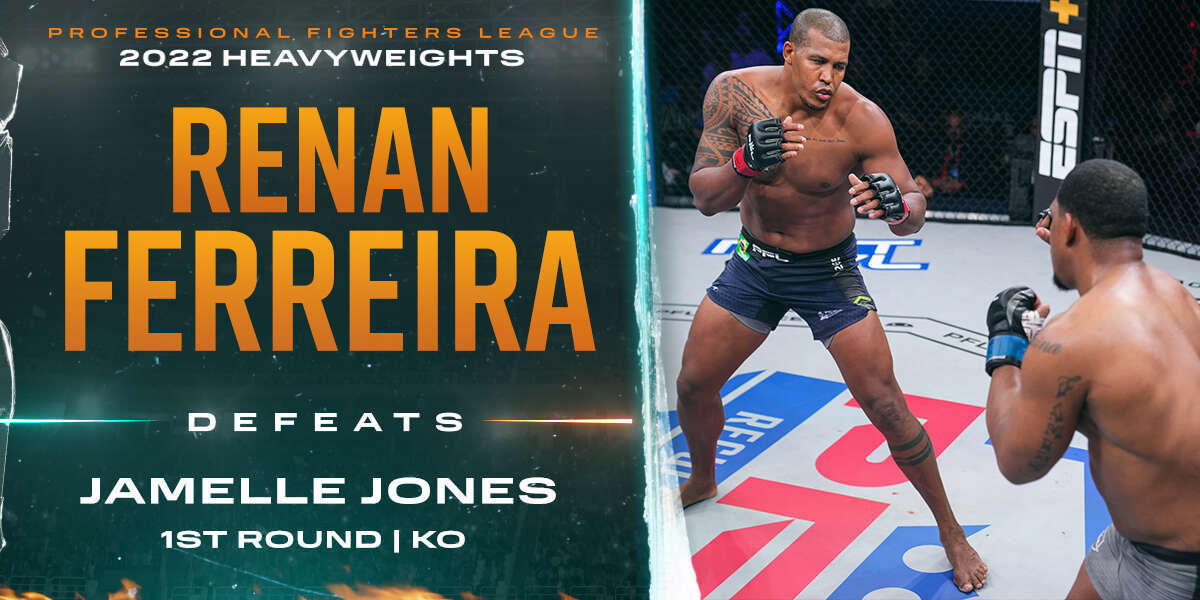 In one of the most anticipated bouts of the evening, 2 physical specimens collide as 6’8” 260lb Renan “Problema” Ferreira (8-2, 1NC) meets 6’0” 237lb 2021 PFL Semifinalist Jamelle Jones (12-7).  That is a whole lot of man in the Smartcage folks, and with 17 finishes between the 2 of them it’s fair to assume this one probably won’t see the judges scorecards.

Ferreira had a strange 2021 PFL campaign.  His promotional debut was against a legend of the sport in Fabricio Werdum, and the bout was overturned to a no contest after it was ruled the referee missed a tap from Ferreira before Ferreira finished Werdum with ground and pound.  After that NC, Ferreira picked up a unanimous decision over Carl Seumanutafa but missed the playoffs. In a showcase bout during the playoffs, Ferreira picked up the fastest finish in PFL Heavyweight history when he knocked out Stuart Austin with a clean 1-2 31 seconds into the fight.  Ferreira is one of the most intriguing heavyweight prospects in the sport and seems to have limitless potential.

Jones, a late edition to the 2021 PFL season, made the most of his opportunity when he finished Klidson Abreu in the 1st round with some massive hammerfists and clinched a playoff berth with just a single regular season appearance. A former CFFC champion and 2x NJCAA wrestling champion, Jones looks to build on his successful first PFL season and win gold this year.

There is a lot of man in the Smartcage! OH MY! Renan lands a big knee and Jamelle is hurt! He turtles up and Ferreira swarms him, raining down bombs from the top and the ref has seen enough! Jones out cold! Ferreira breaks his own record for fastest heavyweight finish in consecutive fights, what a monster.

My word, catches him with the shin/knee and then puts him out all in 25 seconds. Renan Ferreira is indeed a problema!