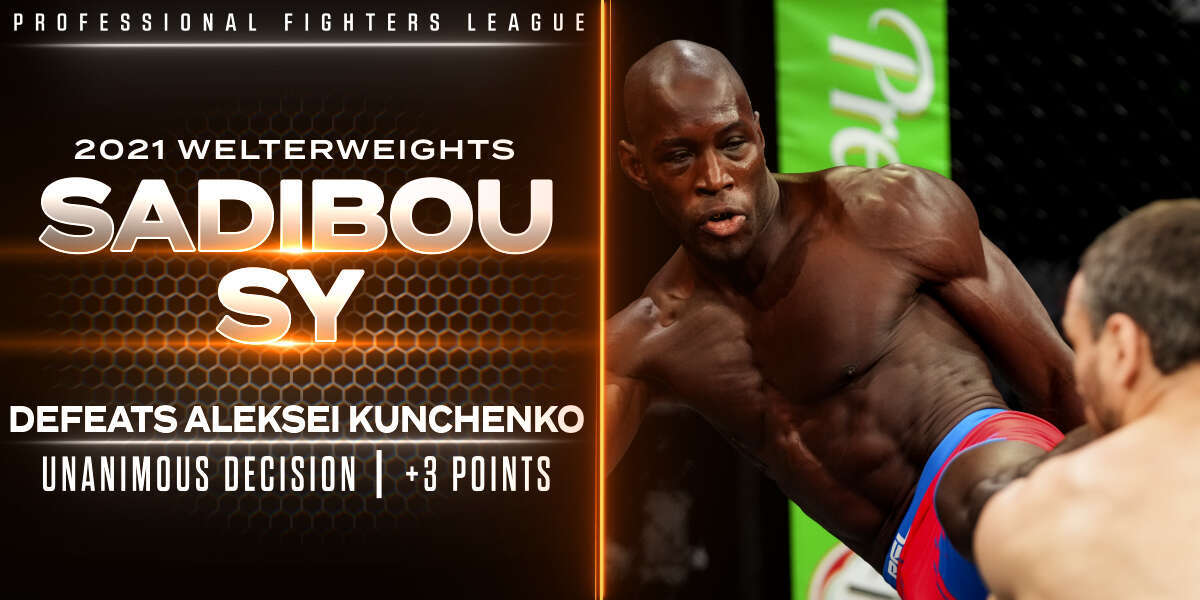 The PFL 5, 2021 fight card kicked off on ESPN+ Thursday evening at Ocean Casino Resort in Atlantic City, N.J., with a welterweight showdown between Sadibou Sy and Aleksei Kunchenko.

Sy, a Swedish national champion in Muay Thai and kickboxing, fought to a no-contest due to an accidental eye poke in his most recent bout vs. Nikolai Aleksakhin at PFL 2, 2021, on April 29. Before that, Sy was eliminated from the 2019 PFL Playoffs via majority draw against Ray Cooper III, a devastating conclusion to his tournament run.

Against Kunchenko, who last emerged victorious back in 2018 against Yushin Okami at UFC Fight Night 142, Sy looked to make a statement.

Sy looks extremely relaxed, as expected, on the feet, landing combo after combo early. Thirty seconds in, and he’s already landed seven of the 10 strikes he’s thrown, mixing it up to the head and legs. This dude is quick and rangy, and Kunchenko can’t yet figure it out from range.

Kunchenko rushes in with a winging overhand right that just misses the mark. They return to striking at range, and Sy continues to enjoy the better of it. Kunchenko rushes in again and presses Sy against the cage. This is what he wants, but Sy shows off improved takedown defense and clinchwork early.

Sy works off the cage and lands a series of knees to the body. Kunchenko disengages after the second knee, which may have grazed a bit low. No break, though, and they’re back to striking. Kunchenko again clinches and presses Sy against the fence, where they get to work.

Five seconds to go, and Kunchenko executes a beautiful hip toss, planting Sy on his back. It was his only notable offense of the round, but it was emphatic, creating an interesting dynamic as we head to Round 2.

PFL’s proprietary Fighter Performance Rating gave Sy a significant edge in Round 1 despite the late takedown from Kunchenko. Round 2 opens up, and it’s clear Kunchenko wants to push the pace. Sy obliges, cranking the volume of his strikes. He catches Kunchenko with a crisp straight right, putting Kunchenko on wobbly legs for a moment.

Kunchenko bounces back to his feet but is planted by the right of Sy. In desperation mode, Kunchenko clutches at a leg while Sy hammers away with follow-up shots. Kunchenko survives, gets to his feet, and clinches, pushing Sy back against the cage. Kunchenko looks fully recovered here, moving Sy around the cage and landing some short shots inside of his own.

After some time in the clinch, the two disengage and return to striking at a distance. No doubt, Sy enjoys the best of these exchanges. He’s working the head, body, and legs with a variety of strikes, keeping Kunchenko guessing and owning the action here.

To his credit, Kunchenko stays aggressive and pushes the pace, but there’s little doubt he’s a step behind on the feet. They clinch to close the round once again against the cage.

Kunchenko seemingly needs a finish here, and he’s playing the part early, pressing forward and winging punches toward Sy’s dome. Problem is, Sy sees it all in advance, wisely moving and countering with shots of his own. They clinch against the cage just 45 seconds into the frame.

Midway through the round, and we’re in the same spot, with Kunchenko pushing Sy against the fence and looking for a takedown. He dives down for a double, switches to a single, but can’t finish either.

They separate with 90 seconds to go in the fight. Kunchenko lands a left that appears to sting Sy, and he briefly retreats and regroups. More body shots from Sy find the mark, but Kunchenko eats them all and continues marching forward. Forty seconds left, Kunchenko slips on a high kick attempt, and Sy pounces, leading to another clinch situation against the cage. Kunchenko’s right side is visibly damaged from the body shots throughout the fight, but he makes it to the final bell.

The judges saw it clearly, with all three agreeing on the decision. Takedown defense and striking wings the night, as Sadibou Sy earns the victory and three points in the PFL Welterweight standings. He’s in third place for the time being with four points total.