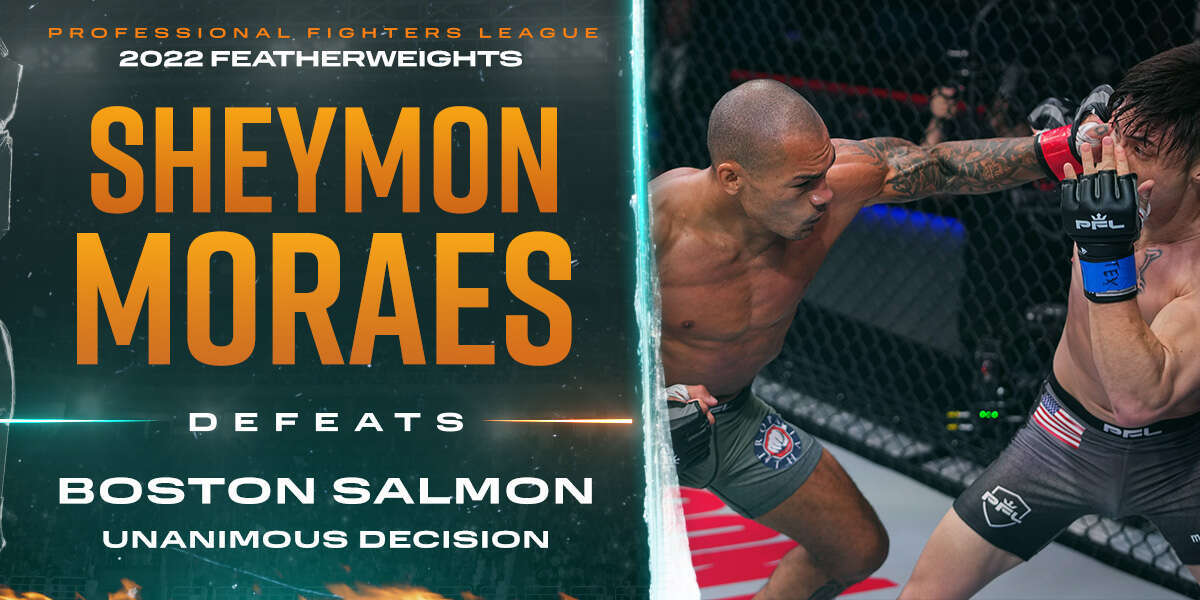 After narrowly missing the playoffs last year, Sheymon Moraes (13-5) looks to build on his 2 fight finish streak against fellow UFC veteran Boston Salmon (8-3). While Moraes makes an anticipated return for his 2nd PFL season, Salmon is a new face who picked up a 2022 PFL contract following an incredible 2nd round TKO of Do Gyeom Lee on week 4 of the PFL Challenger Series.

Notably, Moraes fought all 3 of his PFL bouts last year (2 season, 1 showcase) on a torn ACL which has since been surgically repaired.  No stranger to adversity in his own right, Salmon won his PFL contract while his father was battling (and beating) cancer.  It’s fair to assume we’ll see better, more focused versions of both of these fighters tonight.

The fight begins and both men look to feel each other out, and it seems Salmon is content to be the fighter going first as he fires a few missed jabs. Salmon lands a nice a right that backs Sheymon up but Salmon overcommits and gives up his back.

Sheymon takes advantage and quickly takes the back and starts chipping away with knees to the butt and thighs.  Salmon is fighting the hands and trying to break Sheymon’s grip but he’s unsuccessful early.

2 minutes into the fight and Salmon is able to break the grip and turn into Moraes. Sheymon continues peppering small shots from the front now.  Salmon briefly flips the position and presses Sheymon into the cage, but it is short lived as Sheymon circles out and we’re back.

Sheymon hits a nice muay thai sweep and lands in top half guard.  Salmon is able to work back to his feet quickly and get back in the clinch.  Salmon shoots but Sheymon is wise to it and sprawls well, winding up with a front headlock.  Salmon gets back to his feet and eventually breaks the clinch.

With about a minute remaining, Sheymon is now coming forward and lands a nice body kick.  Sheymon is doing a great job drawing Salmon into his style of fight, clinch heavy, lots of muay thai, and Sheymon was able to show off his improved defensive grappling.

The second round begins and Sheymon opens with a nice left hook.  The output is up for both men to start this round but it’s still Sheymon leading the dance.

Salmon swings and misses and Sheymon makes him pay with a BIG right hand that seems to stun Salmon a little and gets him backing up.  Sheymon is controlling the center of the Smartcage and landing both punches and kicks at this point.

About 90 seconds in, we get a wild exchange that begins with a right for Sheymon, continues with a strong counter left from Salmon, and culminates with a clean 1-2 for Sheymon.

Just when it feels like Sheymon is starting to pull away, Salmon lands a big shot that wobbles him but again overcommits closing distance and allows Sheymon to get into a dominant clinch position.

Sheymon starts ripping knees to the body and Salmon briefly starts to lower to the mat, seemingly hurt, but he persists.

Sheymon lands a big overhand right and Salmon returns with a nice left, this round has been much more competitive, and Salmon has had some moments.

With 30 seconds remaining in the round, Sheymon stalks his prey and unloads a big right hook against the cage that gets Salmon to turtle up briefly.  Very strong end to the round for Sheymon who landed some big damage to finish the round and put a stamp on it for the judges.

Highlights from Moraes vs Salmon round 2!

3rd and final round is underway and Salmon most likely needs a finish.  Sheymon can seemingly sense that Salmon was having trouble with those body shots and opens with a nice power roundhouse that gets through.

Both men try to measure distance and again Sheymon lands a big body kick.  1 minute into our final frame and one would like to see more urgency from Salmon.  Sheymon briefly hits the mat, but it appears he just slipped.

Sheymon gets right back to his feet and initiates the clinch, sweeping Salmon and landing in a heavy half guard with 3:30 to go in the fight.  Sheymon is touching the body with small shots and mostly staying heavy on top and fighting for position.

Salmon is going to have to start getting desperate as we eclipse the halfway mark of the round.  Sheymon looks to pass to full mount and Salmon smartly fights it off with a knee block.  With 1:45 left, Salmon is able to shrimp to his hips, get to his knees, and get back to his feet with about 90 seconds remaining.

Salmon will have to do something here and quick, but once again Sheymon locks him up in the clinch against the cage and starts blasting knees to the body.  They break with a minute left in the fight and you have to respect Sheymon for still fighting hard and not just resting on his laurels with a likely  3 round sweep in the bank.

As the round nears its end, Sheymon attempts another takedown and Salmon fights it off.  Salmon tries to jump the guillotine with about 6 seconds remaining and it’s just too little too late.

Sheymon Moraes picks up his 3rd straight win and 3 points with a 30-27 unanimous decision that ties him atop the featherweight standings.