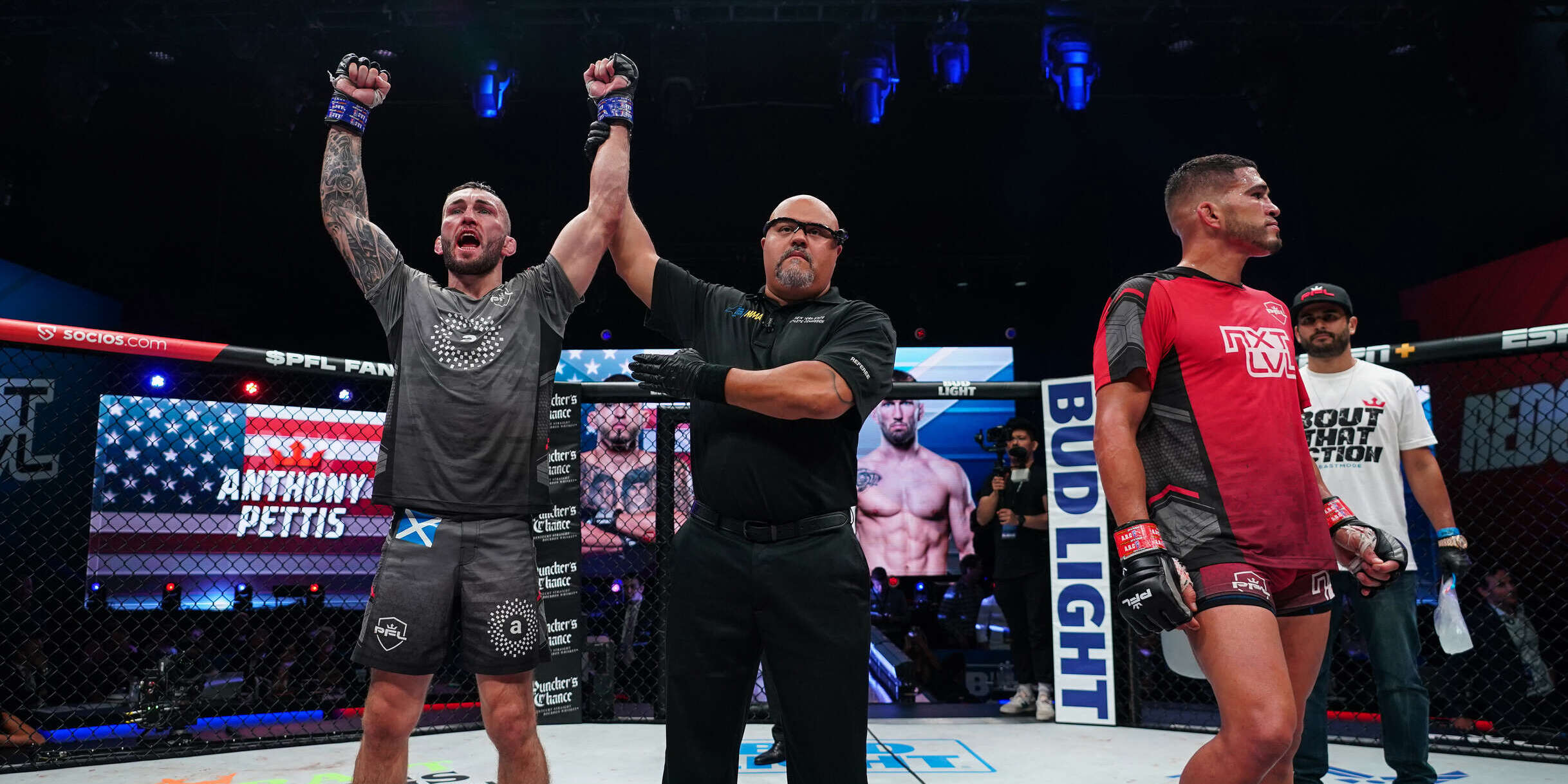 NEW YORK, NEW YORK - August 5, 2022 - The Professional Fighters League (PFL) kicked off its 2022 Playoffs with a thrilling night of action at PFL 7 at The Hulu Theater at Madison Square Garden in New York City. The evening’s card featured four Playoff bouts across the Lightweight and Light Heavyweight divisions.

In the night’s main event, top-seeded Anthony Pettis and Stevie Ray took to the SmartCage in a highly contested rematch from the Regular Season. Despite being the underdog twice, Ray proved the stage was not too big as he defeated Pettis once again, this time via unanimous decision, and advanced to the PFL Lightweight World Championship. The result improves his career record to 25-10-0 and will now have a shot for the $1 million prize.

In the evening’s co-main event, Omari Akhmedov battled Josh Silveira in the second Light Heavyweight Playoff matchup. Akhmedov, who came into the contest as the two seed, continued his success from the Regular Season and earned a trip to the PFL Light Heavyweight Championship in his debut PFL season.

Olivier Aubin-Mercier squared off with Alexander Martinez in the first Lightweight Playoff contest of the night. Aubin-Mercier put on a dominant display, and defeated Martinez by unanimous decision, and punched the first ticket to the 2022 PFL Lightweight Championship.

The 2022 PFL Playoffs began with the Light Heavyweight division, with top-seeded Robert Wilkinson matching up against the fourth seed, Delan Monte. Wilkinson did not disappoint in his PFL Playoff debut, defeating Monte via 1st round KO, earning a spot in the PFL World Championship. Wilkinson, who hails from the Australian Island of Tasmania, is 4-0 and will now fight for the PFL Light Heavyweight belt in his first PFL season.

“Tonight showcased what the PFL is all about, as MMA fans at The Hulu Theater in New York City witnessed not only the determination of fighters looking to earn a trip to the PFL Championship, but also those competing for a spot on the PFL’s 2023 Regular Season roster,” said PFL CEO Peter Murray. “I look forward to watching the world class action take place on August 13 in Cardiff, Wales at Motorpoint Arena.”

“Our world-class athletes delivered a night filled with action for MMA fans around the world in the kickoff to this season’s playoffs,” said PFL President of Fighter Operations Ray Sefo. “Fighter performances lived up to the expectations of the crowd on display at Madison Square Garden, and I’m excited to witness the next four fighters who will earn a spot in the PFL World Championship.”

In a showcase bout featuring Itso Babulaidze and Mahmoud Sebie, it was Babulaidze who impressed the crowd, and in doing so, earned a victory via 1st round TKO. Babulaidze, the first PFL fighter to represent the nation of Georgia, moved his career record to 2-0-0.

Meanwhile, the next Challenger Series qualifying matchup featured Elvin Espinoza and Corey Jackson. In the end, Espinoza secured the victory via unanimous decision, and an opportunity to compete for a PFL contract in the 2023 PFL Challenger Series. The result moved his undefeated pro record to 7-0-0, with 6 of his 7 wins coming by way of stoppage.

Earlier action saw 21 year-old Alexei Pergande oppose Elvis Lebron-Quiles. The Challenger Series qualifying bout resulted in a victory via split decision for Pergande, who earned a PFL Developmental Contract in the 2022 PFL Challenger Series after winning his fight via 2nd round submission.

Kicking off the card on ESPN+, 2021 Heavyweight Runner-Up Marthin Hamlet took Cory Hendricks the distance, and ultimately earned the victory by split decision in the three-round affair. Hamlet, a native of Tonsberg, Norway, clinched a spot  in the 2023 PFL Season, which will be his third straight season in the PFL.

The PFL will return to action on August 13 live from Motorpoint Arena in Cardiff, Wales, as the 2022 PFL Playoffs resume with the Welterweight and Heavyweight divisions. Both divisions are up for the taking, with Welterweight top seed Rory MacDonald looking to take the next step and advance to the 2022 PFL World Championship, and Heavyweight top seed Denis Goltsov seeking a return to the $1 million matchup.

All PFL 2022 Season events are live on ESPN, ESPN2/ESPN+ and ESPN3 (Spanish), as well as on premier global distribution partner platforms reaching 160 countries around the world.

PFL League is primetime in the U.S. on ESPN and ESPN+ and broadcast and streamed worldwide to 160 countries with over 25 media distribution partners including Channel 4, DirecTV, RMC Sport, Eurosport, Sky Sports. PFL Challenger Series is live on FUBO TV in the U.S. The PFL fighter roster is world-class, with 25% of PFL fighters independently ranked in the top 25 in the world. The PFL proprietary SmartCage data and analytics platform powers real-time betting and provides next-gen viewing experience.