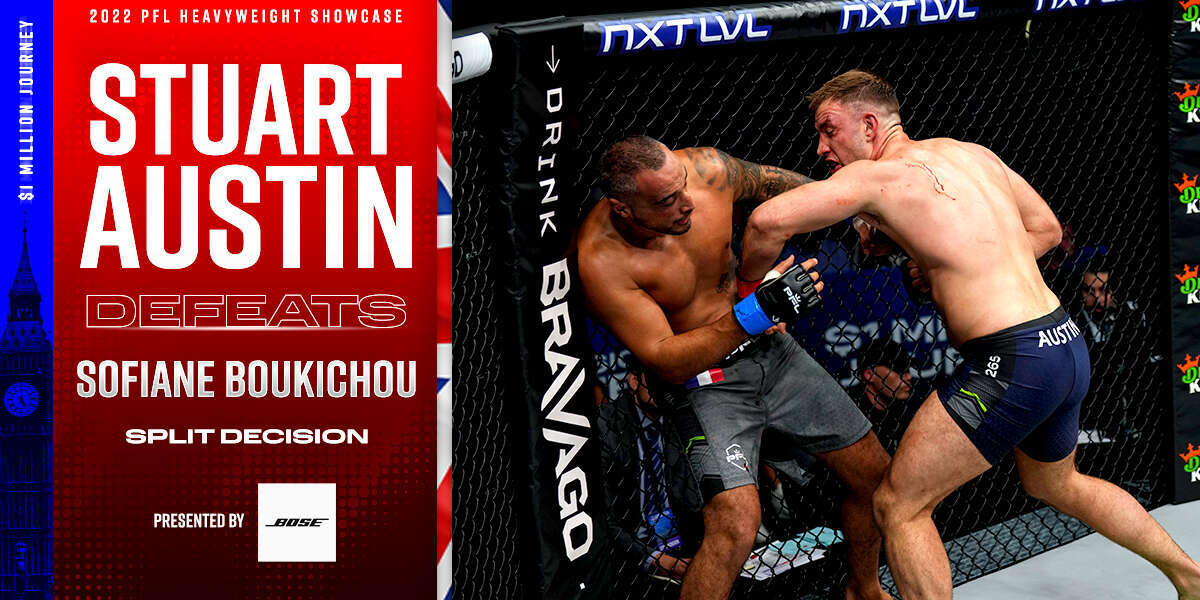 A London native, Stuart Austin (15-8) enters this fight looking for redemption following a tough 0-2 start to his PFL tenure. Always the hammer or the nail, Austin has finished all but 3 of his pro wins and has been finished in 7 of 8 losses. Across the SmartCage stands Sofiane Boukichou (9-4). Boukichou brings a 3 fight win streak into the PFL as he looks to carve out a home for himself in the League.

With a touch of the gloves this Heavyweight Showcase is underway! It’s Boukichou coming forward early though he’s being very measured in his approach, clearly both of these men respect the power of their opponent.

Boukichou changes levels and looks for a takedown before Austin is able to reverse and land a nice outside trip of his own, landing in top side control with plenty of time to work towards the finish he wants so desperately.

Austin is controlling the wrist as he attempts to sink his hooks in and take the back of Boukichou before deciding to uncork a pair of monster left hands.  Boukichou is beginning to build his base up and try to work back to his feet but Austin is doing a great job staying heavy on top and making Boukichou carry all of his weight.

Boukichou continues to attempt to work back to his feet before Austin plants him once again and Boukichou starts attacking a Kimura sweep before eating another big left from Austin.

Finally Boukichou is able to get back to his feet, perhaps getting away with a little illegal cage grab as he now works to break position and Austin works to bring the fight back to the mat.

Again Boukichou attacks Kimura and this time he is able to use it to get Austin to the mat! The sub attempt is fairly deep but Boukichou decides to abandon it for position, taking the mount and raining down punches before taking the back and continuing to pour on some damage to end the round!

After a strong start Austin faced some adversity at the end of the round there and looks a bit tepid to engage early in the 2nd.  Boukichou lands a nice left hook as Austin looks for a big counter but can’t find the target.

Boukichou is really establishing his jab well now, snapping back Austin’s head when it lands before dropping his level and looking for a double which Austin is able to defend.

The fighters now engage against the SmartCage as Austin works in the clinch. They disengage and Boukichou lands a slick backfist off a missed uppercut, similar to the strike we saw crumple Jarrah Al Silawi a few weeks ago.

Halfway through the round Austin again punches his way into a double leg attempt as Boukichou again defaults to the kimura to defend.  Eventually Austin is able to secure the takedown but Boukichou is wisely using the SmartCage to protect his back and try to get back to his feet.

Again Boukichou looks for that kimura from the bottom as Austin defends and peppers the body.  With 30 seconds remaining Austin lands another heavy hammerfist to the body which forces Boukichou to abandon the kimura and the round will end with Austin on top working the body.

We begin our final frame and this fight is still up for grabs as both fighters seem a bit fatigued.  Boukichou lands a nice right but neither fighter seems to have much juice behind their strikes at this point as Austin lands a right hand and changes levels once again.

Austin is attacking the single leg now as Boukichou again goes to the kimura grip to defend. Once again Austin is able to get the fight to the mat and he’s in the closed guard of Boukichou with a chance to do some damage.

Austin is staying busy, landing some big left hands to the head and mixing it up to the body as well.  Austin seems to be catching a 2nd wind here as these ground and pound strikes definitely have some zip on them.

With 2 minutes remaining, the urgency is rising for Boukichou as this fight slips through his grasp. Boukichou will need to make something happen here but Austin is smothering him, staying heavy on top and doing enough damage to keep the referee from intervening.

Boukichou is able to build up to a knee but again Austin stays heavy and drags him back down to the mat. Boukichou may just not have enough left in the tank to get back to his feet here as we hit 30 seconds remaining and Austin postures up and lands big twice. The 10 second clapper hits and Austin obliges the crowd, unloading a barrage of big punches to put a stamp on the round and the fight.

Stuart Austin snaps the skid and gets his first win in the PFL!