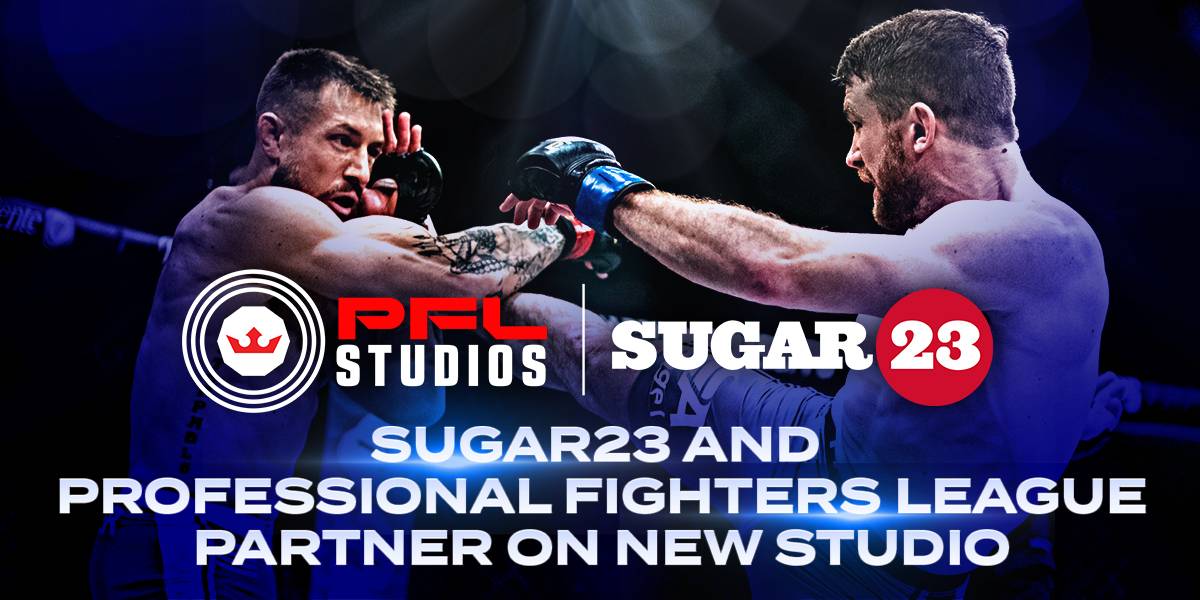 LOS ANGELES (March 19, 2021) – The Professional Fighters League (PFL), the fastest growing and most innovative sports league, and Sugar23, the acclaimed creative force in entertainment, have partnered together on a next-generation studio. The partnership will focus on two areas – non-live MMA content and entertainment opportunities for PFL’s star MMA fighters.

Sugar23 and PFL Studios will partner on the development, creation, and distribution of new non-live MMA content associated with the league, fighters, and brand.  The new content collaboration will include both long and short-form content, created and produced for multiple channels and platforms.

Mixed Martial Arts (MMA) has a global audience of 550 million making it the third largest sports audience, trailing only soccer and basketball. MMA fans are the future of sports entertainment, as the youngest and most digitally engaged audience.

“This is great day for MMA fans as they can look forward to cool new content that they have never seen before,” said PFL Co-Founder and Chairman, Donn Davis. “Sugar23 is the innovator in Hollywood today and PFL is the innovator in MMA today – what we’ll do together will be a must watch mash-up.”

“We’ve never been inside the box thinkers – we like to say here that we’ve never even seen the box,” said Academy Award® winning producer and acclaimed creative force, Michael Sugar. “The incredible PFL team are focused on breaking the mold for sports entertainment, and we can’t wait to get into the cage.”

Sugar also joins the PFL Advisory Board to provide his unique insights and entertainment guidance as PFL continues its expansion and growth as an innovative leading global sports and media company.


ABOUT SUGAR23:
Founded in 2017 by Academy Award®-winning manager-producer Michael Sugar, Sugar23, Inc. is an emerging management production and creative platform. They specialize in creating original, premium content across all media, incubating and investing in brands and companies, and providing strategic advisory for branding, production, and other go-to-market needs for companies across industries and stages. Michael has shepherded such award-winning projects as “Spotlight,” “The Knick,” “The OA,” “Maniac,” “13 Reasons Why,” and “I am the Night.”

Sugar23 is currently in pre-production on season three of “Dickinson” on Apple TV+, starring Hailee Steinfeld and Jane Krakowski, with season two recently launched January 2021. Sugar23 also produced “Worth” starring Michael Keaton and Stanley Tucci, which premiered at the 2020 Sundance Film Festival and was acquired by Netflix for release in September 2021. Most recently, Sugar23 produced the Netflix feature “The Laundromat” directed by Steven Soderbergh and starring Meryl Streep, Gary Oldman, and Antonio Banderas, which premiered to great acclaim at the 2019 Venice Film Festival. Sugar23 currently has a first-look film deal and an overall television deal with Netflix.

The company has dozens of active television and film projects in development and works closely with leading brands around production opportunities, including TIME, FaZe Clan, Nelson Mandela Media, animation studio Mindshow and others. Recently announced projects in development include the Leslye Headland “Star Wars” series for Disney+, “Last of the Mohicans” for HBO Max and will be producing the adaptation of Josephine’s War together with Truly*Adventurous.

Sugar23 works cross-media and has recently launched an independent podcast studio in-house, as well as a book imprint, Sugar23 Books, an imprint of Houghton Mifflin Harcourt. Sugar23 books recently acquired GRACE: A President, His Speechwriter, and Ten Days in the Battle for America by Cody Keenan, President Barack Obama’s longtime chief speechwriter. As part of Sugar23 acquisitions and investments, Sugar23 has acquired the rights to the New York City luxury retailer Bonwit Teller and is developing plans to relaunch the brand. In addition, Sugar23 has teamed up with experiential agency Blue Revolver to bring to market new virtual event technology. Michael and Sugar23 also continue to represent a number of award-winning creatives, including both established and emerging writers, directors, and creators.

In addition to the creative capabilities, the company has an embedded team that incubates and invests in emerging companies where Sugar23 can create accelerated and differentiated value to the concept or company. Relatedly, the Sugar23 Foundry division offers technology and digital services to creatives and entrepreneurs at all levels, from startups to established businesses, on brand development, targeted investments, and core cultural strategies.

ABOUT THE PROFESSIONAL FIGHTERS LEAGUE
Professional Fighters League (PFL) is the first and only to present MMA in the sports-season format where individual fighters compete in Regular Season, Playoffs, and Championship.  PFL is the innovation leader with the PFL SmartCage delivering viewers on-screen fight analytics and real-time prop bets. PFL Roster is second to none with 25% of its fighters ranked in the top 25 in their weight-class. All PFL 2021 Season events are live primetime on ESPN2/ESPN+ in the U.S. and available on leading broadcast and streaming outlets in 160 countries worldwide.