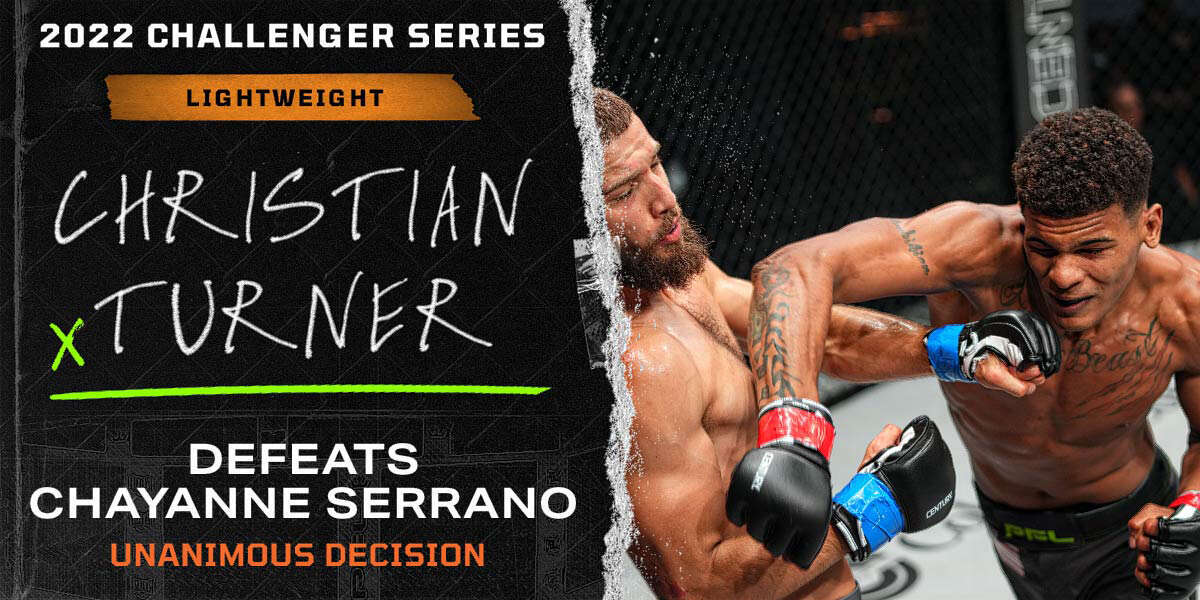 Turner bounces back from tough first round, smothers Serrano

Week 7 of the 2022 PFL Challenger Series rolls on with the fourth of five fights: Christian Turner vs. Chayanne Serrano.

These Llightweights make their respective pro debuts after stellar amateur runs. Turner went 4-0, winning the NFL amateur featherweight title in his most recent bout, a first-round knockout of Dominic Colangelo in December.

That fight marked his third straight knockout victory, and he hopes to keep that streak alive inside the PFL cage against Serrano.

…which will be no easy task.

Serrano went 6-1 during his own amateur career, finishing four of his opponents in those six wins and capturing the 305 Fights Amateur Featherweight Championship in the process.

Who will make the bigger splash in his pro debut?

Anyway, Turner’s immediately pressing forward and initiating the clinch here, putting Serrano’s back against the cage. Turner elevates on the single, but Serrano displays excellent balance and remains upright. He cracks Turner with two solid hooks for his troubles, and they’re back in the clinch.

Serrano with a nice knee to the body, and they separate. Now, Serrano connects with a nice spinning back kick to the body and follows it up with a head kick. Turner appears a little hesitant here.

They exchange leg kicks, then Turner lands a nice right hand on the exit of a quick exchange. Leg kick from Serrano, followed by a wheel kick that just misses the mark. Turner bullies forward with a blitz, and Serrano makes him pay with some beautiful timing on the knee-tap. They touch the canvas, but Turner’s right back to his feet in a flash, and they clinch.

Another takedown for Serrano, and he’s firing away from the top with ground-and-pound. Turner scrambles back to his feet once again, and they’re back in the clinch with one minute to go in Round 1. Frenetic pace to this one early.

Interesting low blow here, as Serrano lands a punch below the belt in the clinch that prompts a pause in the action.

Twenty seconds left, and Serrano shoots a takedown that Turner stuffs beautifully. Great round from both fighters.

They trade leg kicks to start this round, and Turner lands a nice front kick to the body that momentarily staggers Serrano. Another leg kick from Turner that Serrano shrugs off.

Turner steps in with a strong right hand that lands cleanly. That definitely captured Serrano’s attention, and he shoots for another takedown. Turner defends well once again and threatens the guillotine. It looks tight, but Serrano is able to abandon the takedown and escape.

Here in Round 2 thus far, Turner looks like a different fighter, and the commentators are noticing the change as well. Halfway through the round, Turner lands a stiff jab, followed by a straight right.

Serrano initiates a clinch, but they separate after just a few seconds. Turner’s clearly feeling better here, showing much more aggression and landing nearly at will on the feet. Serrano is still clearly in the fight, but Turner’s come to life here in Round 2.

Now, they clinch against the cage and Turner gets the takedown, going to work from Serrano’s full guard. And that’s a headbutt.

Yep. You can’t do that. Turner pretty clearly headbutted Serrano there. He protested the call immediately, but it’s black-and-white. Thankfully for him, the referee doesn’t take a point, and the fight restarts just in time for the round to end.

Final round of a great fight here. Let’s see who wants it.

They come out firing, with Serrano landing some hard shots to open the frame –– only to be taken down immediately by Turner. He goes to work from Serrano’s full guard, peppering away with short shots.

Two minutes gone in the round, and Turner moves to half guard. Serrano, however, works his way to the cage and uses it to help himself stand.

Only to be slammed back to the mat by Turner. That’s deflating.

Pretty tame conclusion to the round, with Turner maintaining top position and throwing some ground-and-pound. Serrano just had no answers as that fight wore on.

That one was pretty clear. All three judges agreed: Serrano took Round 1, but Turner got it done in Rounds 2 and 3.