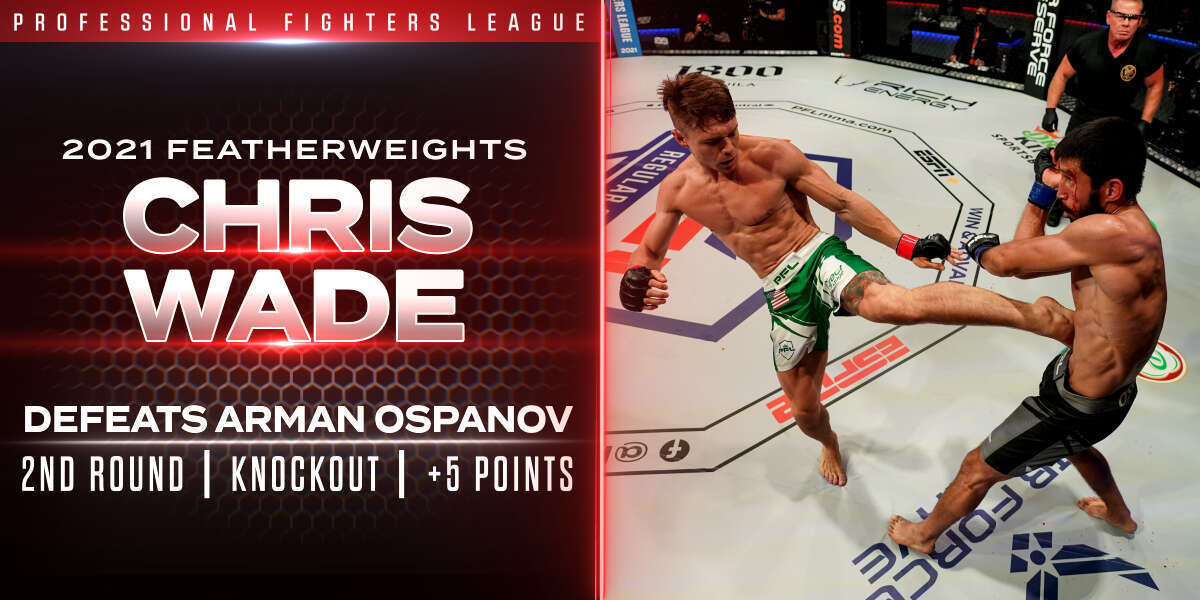 Ospanov, meanwhile, strolled into the PFL cage for the first time Thursday night at the Ocean Casino Resort in Atlantic City, N.J., fresh off a first-round TKO over Rasul Mirzaev at ACA 105.

In a battle between the tournament veteran and the newcomer, experience reigned supreme. Wade entered the bout looking laser-focused from the start, staring down Ospanov during his walk and scarcely taking his eyes off his opponent throughout fighter introductions.

Following the opening bell, Wade immediately closed the distance and pressured Ospanov, but the PFL debutant turned the tables, firing back with quick, powerful shots to keep Wade at bay. Wade countered with a takedown attempt, which Ospanov countered nicely and turned into an advantageous position of his own.

Wade, showing his experience, hit a beautiful kimura sweep to regain some momentum, then looked to take Ospanov’s back. Unsuccessful there, the two fighters returned to their feet, and Wade again pushed the pace, forcing Ospanov against the fence and working him with short shots inside, which appeared to open up a cut above Ospanov’s left eye. After separating, Wade landed a front kick against Ospanov, eating a few counter shots in retaliation.

The two fought at range for the next two minutes, with Ospanov chopping at Wade’s legs and seemingly finding his timing and rhythm. While Wade was never seriously rocked or hurt, Ospanov showcased some speed and precision that landed time again on Wade. Close, fun round from these two.

Wade again forced the fight to open up the round, putting Ospanov on his heels immediately in Round 2. After flashing a spinning heel kick, Wade settled down and struck at range with Ospanov, a strategy that backfired immediately. Ospanov hit Wade with a hard counter right, planting his opponent on his butt briefly. Smelling blood, Ospanov charged and continued to hit Wade with hard shots, but Wade smartly and calmly weathered the storm, even landing a few counter hooks of his own in the exchanges.

Then came the knockout … but it wasn’t Ospanov earning the finish.

Wade measured the distance and threw a perfectly timed head kick, stunning Ospanov badly. Sensing the finish, Wade finished with a flurry of punches that sent his opponent crashing to the canvas in a heap.

CHRIS WADE FACEPLANTS ARMAN IN THE SECOND ROUND!!!

That marked the first knockout victory of Wade’s career, and it earned him five more points in the PFL featherweight rankings, giving him eight total and a spot in the 2021 PFL Playoffs.