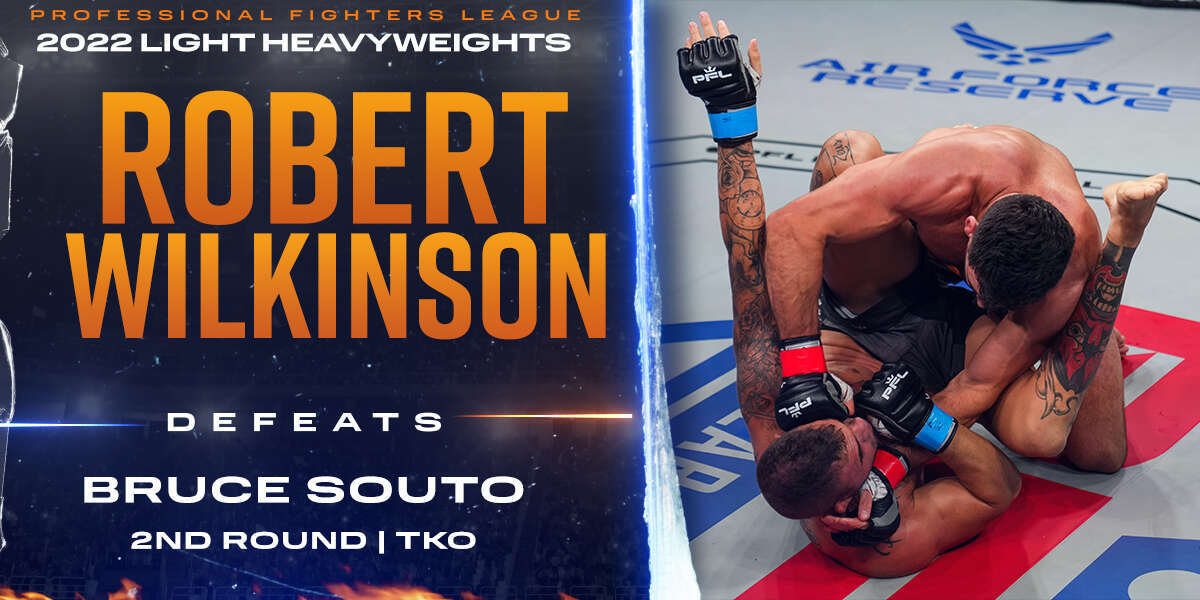 Boy that Powell KO is going to be a tough act to follow, but if anyone can do it it’s 2022 PFL Challenger Series contract winner Bruce Souto and UFC Vet Rob Wilkinson.  Souto actually won his contract with a knee similar to the one we saw open the card, and Wilkinson has fought a who’s who across multiple different promotions including Israel Adesanya, Alexander Poppeck, and Daniel Almeida.

Let’s find out who’ll be the first PFL fighter to put some points on the board and take their place atop the Light Heavyweight 2022 PFL Regular Season standings!

We’re off and Souto instantly takes the center of the cage. Wilkinson comes forward with a good 1-2 showing off all the striking training he’s done in the last few years. Souto overcommits on a punch and Wilkinson is able to grab an underhook and press him against the SmartCage.

Right around 90 seconds in, Wilkinson is able to change levels and quickly take the back.  Souto turns in and shakes him off but to no avail as Wilkinson drags him down to the mat anyway.  Souto pops up only to be taken down again, this time right in the center of the SmartCage.

Souto appears to be in a bit of trouble here in open water with Wilkinson attacking an arm triangle and staying heavy on top.  Souto gets the underhook and tries to muscle his way up but Wilkinson is wise to it and lets go a massive bomb with the right that lands clean on Souto.

Dominant round for Wilkinson as he finishes on top.

The second round is underway as I marvel at Wilkinson and wonder how a dude that large ever made 185.  Souto again looks to take the center of the cage.

And this is the beginning of the end, Wilkinson clips him with a right counter uppercut and Souto goes Bambi legs.  Wilkinson smells blood and swarms Souto, landing a big knee that got the fight to the ground and some big ground and pound before the ref jumps in and mercifully stops it.

He now sits at the top of the light heavyweight division standings!#2022PFL1 LIVE on ESPN+
🌎 https://t.co/jPNvomkWj8 pic.twitter.com/aas6JX86qx

That’ll be 5 points for Rob Wilkinson for a second-round stoppage, doesn’t get much better for your PFL debut.

Wilkinson knew he had Souto hurt and put the pressure on to seal the deal, you love to see some good killer instinct when a fighter has his opponent hurt. He might just be a problem in this deep Light Heavyweight Division this season.