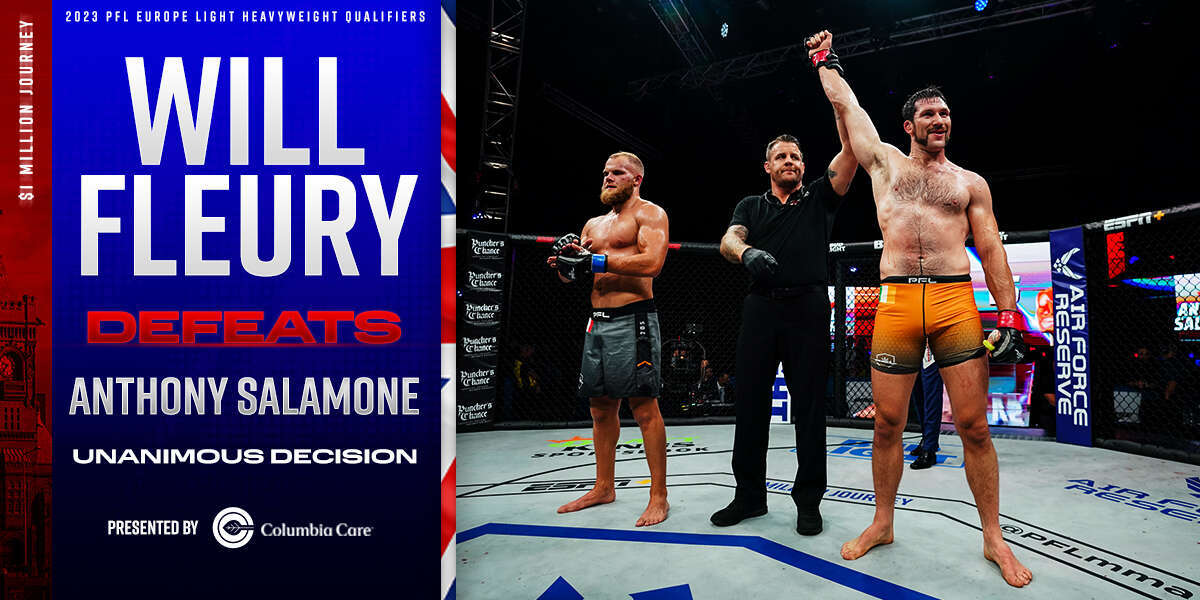 Our next PFL Europe Qualifier bout features a pair of Middleweights making the jump to 205 in former UAE Warriors Middleweight Champion Will Fleury (10-3) and Anthony Salamone (7-0). Fleury, a teammate of Conor McGregor, fights for the first time after suffering a devastating ankle injury that very well may have ended his career.  Salamone meanwhile, a 2x French Greco-Roman Wrestling Champion, puts his undefeated record on the line in pursuit of a spot in the PFL Europe Series.  This will also be Salamone’s first bout at Light Heavyweight as he refocuses on his MMA career following a handful of multi year breaks to focus on wrestling.

Both fighters rush to take the center of the SmartCage early as they begin to feel each other out and find the range.  Fleury lands a nice right hand over the top followed by an inside lowkick and he appears to have a significant reach advantage.

Fleury fires a pair of high kicks that miss the mark as he tries to find his range, and Salamone appears to be having some trouble closing the distance.

Right on cue, Salamone rushes in and initiates the clinch before Fleury quickly reverses position and breaks, retreating back to the center of the SmartCage.  Fleury lands a big right hook with a left hand behind it and Salamone seems to be a bit rocked.  Salamone engages the clinch to negate some of the danger as he doesn’t quite seem to have an answer for Fleury’s striking yet.

Fleury does well to fight the ends and break off, firing a big left hand that connects on the exit as he again retreats to striking range where he seems most comfortable.  Marc Goddard gives Salamone a stern warning to keep his fingers up or closed and we’re right back to the action as Fleury lands a big right hand.

The desk notes that despite the warning, Salamone is still fighting with his fingers extended towards Fleury, putting himself in danger of losing a point should he inadvertnly catch Fleury in the eye.

Fleury times up a beautiful right hand over the top of Salamone’s guard and follows it up with a left to the body.  Now, Fleury catches Salamone in the eye and receives a warning of his own, one would have to assume the next foul will result in a point deduction.

As the round comes to an end, Fleury fires a quick high kick that may have partially landed.  Salamone is going to need to figure out how to solve the problem that is Fleury’s length and striking ability as he’s getting touched up in the striking exchanges.

To begin the 2nd Fleury quickly establishes control of the center of the SmartCage and seems to be dictating where the fight is taking place.  Salamone looks for a body kick that Fleury is able to deflect and Fleury returns with a heavy body kick that lands clean.

Now Fleury is chopping the tree with some heavy low kicks. He’s doing a great job of mixing up his looks and angles and keeping Salamone guessing as Fleury lands another big straight left to the body.

Fleury feints the flying knee and throws a big straight left that lands flush behind it, he seems able to do whatever he wants on the feet right now and looks very loose and confident in there.

Halfway through the round Salamone has yet to get off any meaningful offensive and Fleury has more than tripled his output so far.  Salamone swings big and misses and Fleury lands a picture perfect counter straight left, snapping Salamone’s head back.

Salamone is going to have to take some risks to turn the tide in this one but he seems reluctant to go first after how well he’s been countered all night.

Fleury loads up on a big left and finally Salamone is able to catch him on the way in and both fighters land in a quick exchange as the round ends.  Salamone more than likely needs a finish to qualify for PFL Europe.

Our final round is underway and we’ll see if Salamone shows the urgency one would like to see from a fighter who is more than likely down 2 rounds.

Salamone does seem to be showing a bit more urgency and willingness to go first but he’s still not having much success as Fleury lands a heavy kick to the body followed by a big hook to the liver.

As Salamone retreats, Fleury decides to shoot a takedown of his own on the Greco-Roman specialist and succeeds, quickly working to take the back.  Fleury has one hook in and Salamone is doing a good job using the cage to prevent Fleury from advancing further and fully taking his back.

Fleury is controlling well and landing some short ground and pound shots, and gradually these shots are getting heavier and heavier as Fleury attempts to force Salamone into a mistake he can exploit for a finish.

Fleury briefly attacking the neck before continuing with an onslaught of punches. Hilariously, Marc Goddard asks Fleury not to use profanity in the cage as he continues his assault on Salamone.

Again Fleury attacks the neck and Salamone turtles up.  Salamone seems to be in survival mode here before briefly returning to his feet just to be taken down once more.  Salamone gets back up again but the whole time Fleury is punishing him to the head and body with short clinch strikes, and that will end a dominant bout for Will Fleury!

Will Fleury is headed to the 2023 PFL Europe Roster!!#PFLPlayoffs pic.twitter.com/nH7tA040LP

Will Fleury outstrikes Anthony Salamone by an 8/1 margin, pitching a shutout to qualify for the 2023 PFL Europe Series!