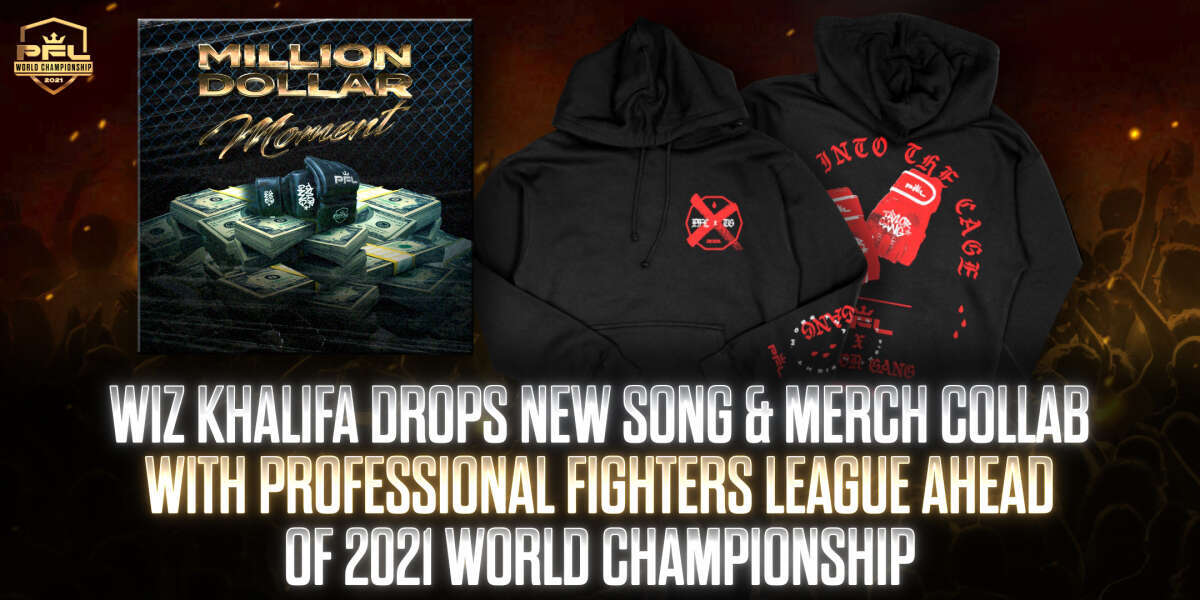 Tickets for the Biggest Night in MMA are On-Sale Now

NEW YORK (October 21, 2021) – Multi-platinum GRAMMY & Golden Globe nominated recording artist and PFL investor Wiz Khalifa has released his new original song, “Million Dollar Moment,” for the Professional Fighters League ahead of the 2021 PFL World Championship taking place on Wednesday, October 27. The track is inspired by the ethos of PFL and its unique format, as 12 elite athletes have persevered through the Regular Season and Playoffs, and now each looks to earn a world title and $1 million prize. Listen to the song here. Khalifa will perform the track, written specifically for the event, live for the first time at the biggest night in MMA being held at the Seminole Hotel & Casino in Hollywood, FL and broadcast in primetime on ESPN networks and ESPN+.

"I had a great time making this song with Sledgren because it allowed me to create something that will be a big part of the PFL with my MMA family,” said Khalifa. “I can't wait to perform it at the Championship next week."

The track and capsule are the culmination of the first year of Khalifa’s ownership stake in the league. He was appointed a music and content advisor in April and his song “We Own It’ was used as the cold open for all nine PFL Regular Season and Playoff events.

“PFL comprises of the best ownership group in sports and it’s great to see Wiz Khalifa continue to revolutionize the sport of MMA with cultural opportunities across music and fashion,” said PFL CEO, Peter Murray. “We’re thrilled that Wiz will be performing “Million Dollar Moment” live from the PFL World Championship on October 27.”

The PFL World Championship on Wednesday, October 27 will feature the remaining two fighters across all six weight classes who look to etch their name in PFL history as world champions and capture the $1 million grand prize.

The biggest night in MMA gets even more exciting with the return of two-time Olympic gold medalist, Claressa Shields, to the PFL SmartCage after a thrilling debut at PFL 4. She is set to take on upstart Mexican fighter Abigail Montes at the PFL World Championship. Former world champion Julia Budd has joined the league for the 2022 season and will make her first PFL appearance in a showcase bout on October 27.

Professional Fighters League has quickly established itself as the No. 2 MMA company in the world. With the addition of world-class talent – from elite fighters to established business exec-utives – and partnering with industry-leading brands such as Anheuser-Busch InBev, GEICO, DraftKings, BetMGM, Upper Deck, CarParts.com and Socios, the PFL continues to accelerate its global expansion.

About Professional Fighters League
Professional Fighters League (PFL) is the first and only global organization to present MMA in the sports-season format where world-class fighters compete in a Regular Season, Playoffs, and Championship. Leveraging its elite talent roster and cutting-edge SmartCage technology to deliver unmatched immersive experiences, the league is experiencing a tremendously successful 2021 which has seen substantial viewership growth on ESPN networks. The 2021 PFL World Championship on Wednesday, October 27 is the biggest night in MMA where the top-two fighters across six weight divisions compete to become a world champion and earn the $1 million title purse. The event airs live on ESPN networks and streaming platforms, as well as on leading broadcast and streaming outlets in 160 countries worldwide.

About Wiz Khalifa
Multi-platinum selling, Grammy and Golden Globe nominated recording artist Wiz Khalifa burst onto the scene with mainstream success with the release of his first major label debut album, ROLLING PAPERS‎ in 2011. ‎ROLLING PAPERS spawned the hugely successful hits “Black and Yellow,” “Roll Up,” and “No Sleep” and gave Wiz the platform to win the award for “Best New Artist” at the 2011 BET Awards and “Top New Artist” at the 2012 Billboard Music Awards. As a follow up to ROLLING PAPERS, Wiz Released O.N.I.F.C. in 2012. This album featured tracks “Work Hard, Play Hard” and “Remember You” featuring The Weeknd. His third studio album released in 2014, BLACC HOLLYWOOD, ‎debuted at #1 on Billboard’s Top 200 album chart and included hit single "We DemBoyz." Soon after, Wiz’s track,‎ “See You Again,” off the FURIOUS 7 soundtrack, catapulted to the top of the charts across 95 countries. Holding the #1 spot for 12 consecutive weeks, “See You Again” broke records by being Spotify’s most-streamed track in a single day in the United States and in a single week in 26 countries. In addition to winning 3 Teen Choice Awards in 2015, “See You Again” continued its success by winning a Critics’ Choice Award in the “Best Song” category, winning two Billboard Music Awards in the categories “Top Hot 100 Song” and “Top Rap Song,” earning three Grammy Award nominations in the categories “Song of the Year,” “Best Pop Duo/Group Performance,” and “Best Song Written for Visual Media,” and a Golden Globe nomination in the category “Best Original Song – Motion Picture.” Wiz released his album, KHALIFA, in February 2016 as a thank you to fans which included the tracks “Bake Sale” featuring Travis Scott and “Elevated.” In June of the same year, Wiz collaborated with Juicy J and TM88 to debut TGOD MAFIA PRESENTS: RUDE AWAKENING and embarked on his co-headlining “The High Road Summer Tour” with Snoop Dogg. On April 20th, 2017, Wiz launched his mobile app, Wiz Khalifa’s Weed Farm, which has garnered over 10.1 million downloads and is currently being played in over eight countries and six languages. Later that year, Wiz’s mixtape, LAUGH NOW, FLY LATER, was released in November and featured the chart-topping hit, “Letterman.” His latest studio album, ROLLING PAPERS 2, which is certified gold, was released in July 2018. Following the release, Wiz and rap duo Rae Sremmurd hit the road for their “Dazed and Blazed Tour” throughout summer 2018. In February 2018, Wiz partnered with Sovereign Brands to create McQueen and the Violet Fog, an Award-winning gin and rated by the NY Times as the “Best Gin”. In April of 2019, Wiz released his 5-part docuseries with Apple Music, “Wiz Khalifa: Behind the Cam,” which gives viewers an exclusive look into his life and career. In the summer of 2019, Wiz went on his “Decent Exposure Summer Tour” with French Montana, Moneybagg Yo, Chevy Woods, and DJ Drama. In November 2019, Wiz starred in Apple TV+’s “Dickinson,” as the re-occuring character of Death alongside Hailee Steinfeld. The third and final season will debut on November 5, 2021. Wiz is also a series regular in Fox’s animated sitcom, “Duncanville” which premiered February 2020 and is current airing its second season. On 4/20 of 2020, Wiz released his latest project, The Saga of Wiz Khalifa, which features his tracks, “Contact”, featuring Tyga and his latest single, “Still Wiz”. In October of 2020, Wiz, along with Nextbite, launched his latest business venture, a delivery only restaurant chain, HotBox by Wiz. The restaurant is now in all major metro areas. Most recently, Wiz released his latest playlist, Taylor Nights, and Wiz has joined the Professional Fighters League World Class Ownership Group. In his advisory role, Khalifa will collaborate with the league on integrating various elements of pop culture – from music integration and content creation to MMA lifestyle apparel.