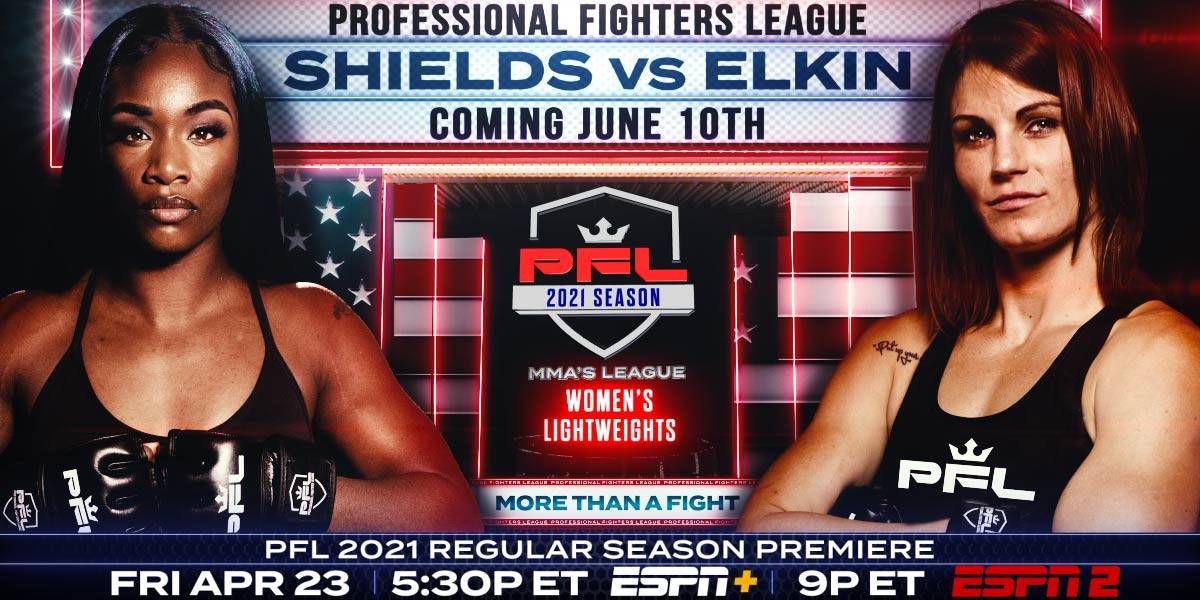 NEW YORK (April 14, 2021) – The Professional Fighters League (PFL), the fastest growing and most innovative sports league, today announced the world’s best female boxer and two-time Olympic gold medalist, Claressa Shields, will make her PFL MMA debut against Brittney Elkin on June 10. The match will be aired live in primetime on ESPN2 and ESPN3 (Spanish) in the U.S. and on leading broadcast and streaming outlets in more than 160 countries worldwide.

The 26-year-old has been training with some of the sport’s biggest stars ahead of her debut in Atlantic City. Since announcing her decision to join PFL last December, Shields has been prepping at Jackson Wink MMA Academy in Albuquerque, New Mexico alongside former world champions Jon Jones and Holly Holm. The three-division boxing champion is set to enter the 2022 PFL season.

“I am very excited to cement my legacy as the Greatest Woman of All Time,” said Shields. “I cannot wait to step into the PFL cage for the first time on June 10 and show the world that I never back down from a challenge. I have shown I am the best boxer in the world and eventually I intend to do the same thing as a mixed martial artist.”

Elkin has a career record of 3-6-0 and the brown belt jiu-jitsu athlete has experience competing across Bellator, Sparta Combat League and Fight 2 Win. Her first and only matchup with the PFL came in June 2018 when she battled future PFL champion Kayla Harrison, losing via submission in Round 1.

“I’m very grateful to be back in the PFL and to have this opportunity to square off with Claressa Shields,” Elkin said. “I know she is a great boxer but this is MMA and I plan to show everyone that I am a well-rounded fighter who can compete wherever the fight takes me.”

“We’re thrilled to announce the highly anticipated PFL debut of the world’s consensus top female pound-for-pound boxer, Claressa Shields,” said PFL President of Fighter Operations, Ray Sefo. “We’ve seen the videos of her training inside the cage and can’t wait to see the showdown between her and Brittney Elkin on June 10.”

The rest of the June 10 card will be announced in the coming weeks.