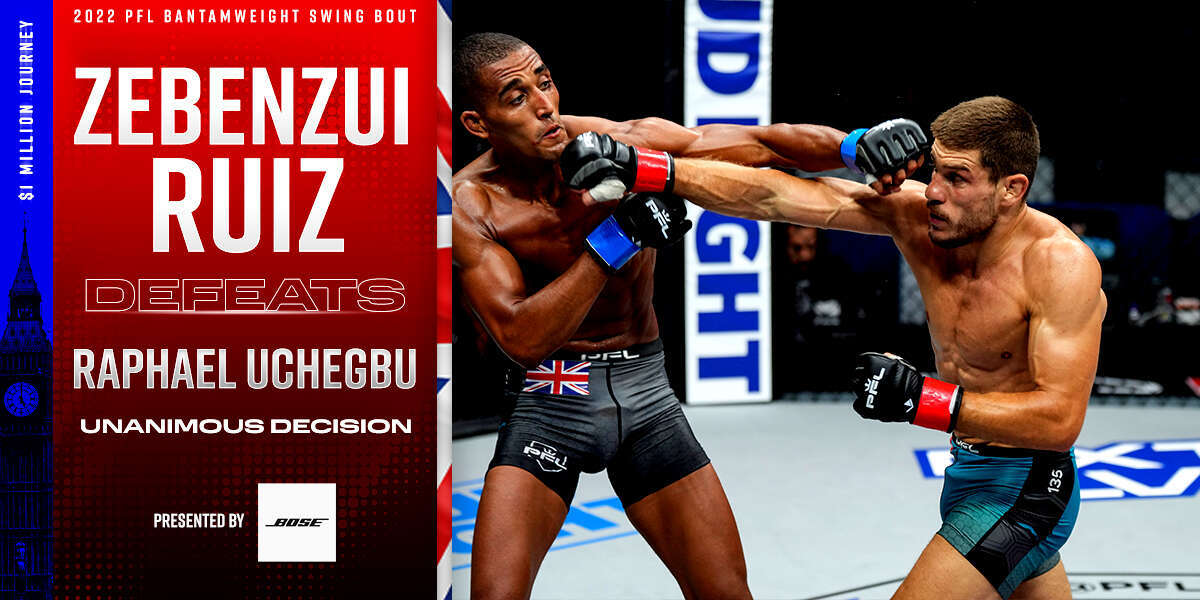 The PFL Playoffs have landed in London for the Featherweights and Women's Lightweights! But before we get to Playoff action, we open with a Bantamweight Showcase bout between the first Spanish fighter to grace the PFL SmartCage Zebenzei Ruiz (10-3) and undefeated Raphael Uchegbu (6-0). 2 prolific finishers, Ruiz has stopped 8 of his 10 pro victories while Uchegbu has stopped 5 of 6. Winning streaks are on the line in this one to start the afternoon!

With a touch of the gloves our Bantamweight Showcase is underway! Ruiz is coming out aggressive early, coming forward behind his right hand and landing effectively early.  Uchegbu fires and lands a low kick before they reset and Uchegbu lands a nice right hand of his own.

Ruiz changes levels and attacks a high crotch, leveraging Uchegbu straight off the mat, into the air, and right back down! Uchegbu starts working back to his feet and Ruiz is aggressively trying to take the back, eventually getting his hooks in and establishing control of the back, though he’s a little bit high.

Ruiz adjusts position and lowers himself on the back of Uchegbu, locking in the body triangle and beginning to unload some big right hands!

The ref warns Uchegbu to defend as Ruiz has him fully flattened out. Uchegbu heeds the call and explodes out of the body triangle, briefly recovering half guard as Ruiz begins to work his way back to controlling the back of Uchegbu.

Ruiz is using excellent wrist control to keep this fight where he wants it but Uchegbu has successfully built up his base now and gets fully back to his feet, reversing the clinch and driving Ruiz into the SmartCage before briefly taking Ruiz down.  He’s unable to keep him down however as Ruiz pops right back up and starts attacking a high elbow guillotine.

The fighters jockey for position in the clinch and Ruiz is able to secure another takedown to end the round on top and Uchegbu gets up and takes a deep breath before retreating to his corner.

Uchegbu rushes to take the center of the SmartCage to begin the 2nd frame here but quickly he’s forced to retreat as Ruiz is committed to fighting off his front foot and pressuring.

Uchegbu uses a right hand to initiate the level change and attack a single leg but Ruiz stays strong and attacks with a 10 finger choke! This looks tight for a moment but Uchegbu is able to free his head and negate the danger for now.

Again Uchegbu drops his level and starts working on a single leg but he just can’t seem to complete it, transitioning to a double leg and then back to a single as Ruiz stays strong and keeps his center of gravity low.

Uchegbu finally is able to lock his hands beneath the hips of Ruiz and finish the takedown. He maintains top position for a brief moment before Ruiz executes a beautiful sweep by attacking the leg and rolling into top full guard.

Ruiz pulls off a sweep with 1 minute to go in the 2nd round!#PFLPlayoffs LIVE on @ESPNPlus
🌍 https://t.co/jPNvomkWj8 pic.twitter.com/p36dJK4ZqF

With 90 seconds to go and not much damage done, Ruiz can absolutely steal this round with some big shots here.  Ruiz passes to half guard seamlessly but he’ll still need to do some damage if he wants to secure the round.

Ruiz starts peppering some left hands to the head and body as he looks to pass to full mount, and Uchegbu seems content to accept the bad position for the moment.

Ruiz will finish this round on top but that was a far more competitive round.

Uchegbu uses a flying knee to close distance to start the round, landing before changing levels.  Ruiz however is ever aware of the threat and again takes the back and starts attacking takedowns of his own as the fighters flip back and forth along the SmartCage looking for dominant position.

Ruiz pummels for double underhooks and flips position once again, grinding on Uchegbu along the SmartCage and peppering some short punches and knees.

Uchegbu returns with a knee of his own before reversing position and unloading! Uchegbu lands a big left hand with a high kick behind it and he’s got Ruiz stunned!

Puzzlingly, Uchegbu decides to abandon the success he was having on the feet and take Ruiz down, this time meeting little resistance as he starts to posture up and look for damage.

Ruiz, seemingly recovered at this point, works back to his feet and starts trying to shake Uchegbu off his back before Uchegbu drags Ruiz down to the mat once more with partial back control.

Incredible scrambles here as both men briefly wind up on top before Ruiz returns to his feet but Uchegbu is still glued to him along the SmartCage, unrelenting in his grappling pressure.

The bout will end with Uchegbu controlling in the clinch as we await the judges scorecards.

Zebenzei Ruiz fades a little down the stretch but takes the 1st 2 rounds to snatch Uchegbu’s 0!