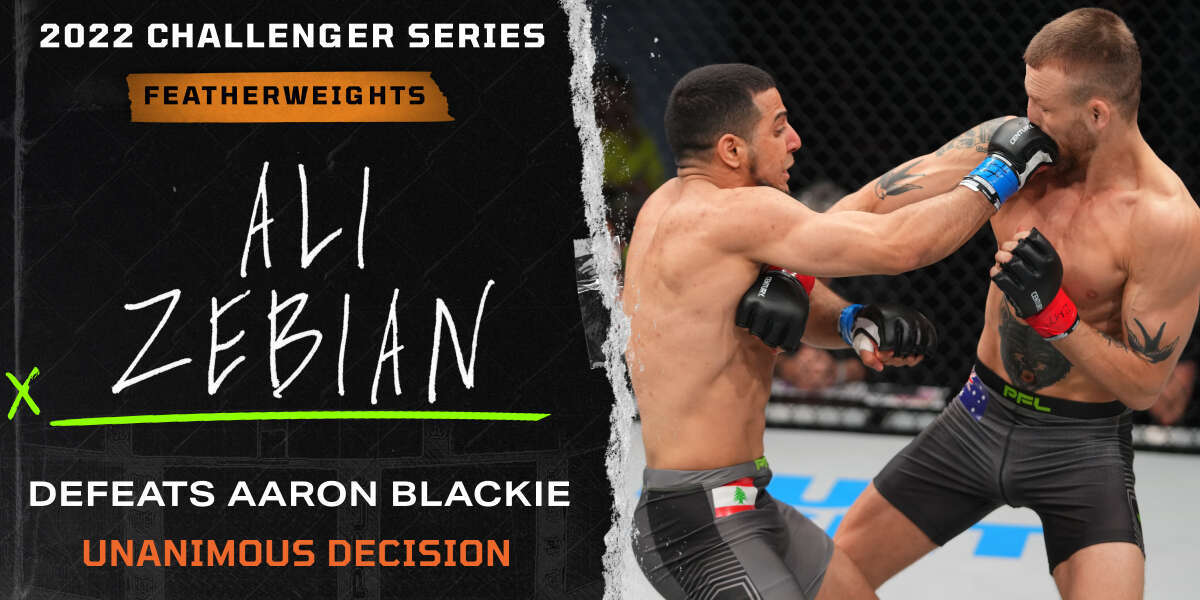 Week 8 of the 2022 PFL Challenger Series brings just that to fight fans across the globe, as PFL competitors get a second chance at glory.

Carlos Leal, Jeslen Mishelle, and Jackie Cataline all return to the cage after notching impressive victories earlier in the 2022 PFL Challenger Series. While all three of those fighters stopped their respective opponents earlier this year, their performances were not enough and they were not eventually selected to win the PFL contract by night’s end.

Will that change Friday night?

Before their bouts, however, we kick it to the featherweight division, as Australia’s Aaron Blackie (8-2 with seven submissions) takes on Lebanon’s Ali Zebian (7-2).

It’s a Brazilian jiu-jitsu and Judo black belt in Blackie vs. an LFA and Bellator vet in Zebian. Let’s see who gets it done.

Early jab from Blackie is met by a leg kick from Zebian. And another. Crispy one-two lands flush from Zebian, and Blackie is on his heels. Zebian is flat-out tagging Blackie early. It took him exactly no time to find his range, and Blackie’s face is already wearing some damage.

Another leg kick from Zebian, and now it’s Blackie finding a home for a strong right hand. This is a firefight already. My goodness. Another massive right from Blackie now.

Zebian’s back to the leg kicks now, landing a pair before eating another right hand from Blackie. Four-punch combo from Zebian lands, but Blackie gets the body lock and takes the fight to the mat in a flash. He goes to work from top position.

One minute left in the round, and Blackie’s holding steady and working out of Zebian’s half guard. Now, he looks to pass and gets it, moving to side control. Thirty seconds to go, and Zebian appears content to hang on and ride out the round.

Blackie, instead, unleashes a little ground-and-pound, and the round comes to a close. Fun fight to kick off Week 8 underway.

Zebian opens Round 2 with –– you guessed it –– leg kicks. Now, he goes high with the kick but slips, landing briefly on the canvas before popping back to his feet.

It’s Zebian this time in on a single, looking to take Blackie to the mat.  Blackie’s not having it though, showing off some impressive balance and working his back to the fence for some extra support. They go to work against the cage with 3:30 left in the round.

They separate and return to the center of the cage, but Zebian shoots immediately, this time letting it go to land a hard left on the break. Halfway through Round 2, and there’s a brief timeout to cut some tape off Zebian’s glove.

Looping left hand from Zebian, and Blackie slips it, timing a takedown attempt beautifully. Zebian defends well, though, and he stays on his feet. Big knee from Blackie either hurt Zebian or made him slip –– hard to tell from that first angle.

The round ends with Zebian looking for a takedown once again.

Between rounds, the camera appears to show Zebian missing a tooth and potentially suffering some jaw/mouth damage. He’s OK and ready to roll after a doctor’s check, though, and we’re off with the third and final round.

Through one minute, not much of significance lands for either man. Blackie shoots, and he gets the fight to the mat. Zebian looks to scramble and pop back up, but Blackie’s all over him, applying pressure against the cage. Zebian escapes, separates, and they’re back to the center of the cage.

Blackie with a nice right hand followed by a backfist. Another inside leg kick from Zebian lands, followed by a 1-2 to the delight of his corner. After that moment of success, he shoots for another takedown, pressing Blackie against the cage as he looks to finish it.

Blackie uses a kimura attempt to sweep and wind up in top position. Beautiful stuff there.

Zebian hits the switch, though, and now he’s back on top and looking to finish the fight in style.

The bell sounds, and that’s a wrap in the night’s opening matchup. Close fight. Let’s kick it to the judges.

Despite the close fight, the judges agreed unanimously on this one, two rounds to one.