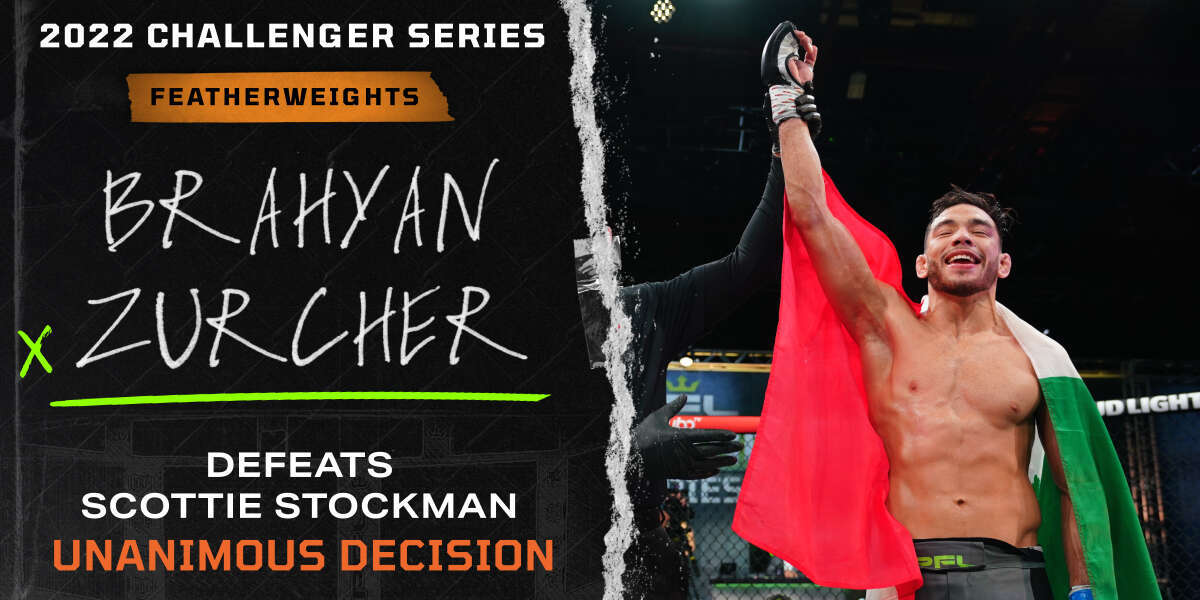 Another Friday night, another chance for a mixed martial artist to earn a life-changing opportunity at the 2022 PFL Challenger Series.

Featherweights take center stage with PFL Challenger Series Week 4 –– and they need to bring it to live up to the action from past weeks.

Through 12 fights over three events, fans across the globe have been treated to nine finishes –– seven in the first round –– with the 2022 PFL Challenger Series.

Can the featherweights possibly meet –– or even surpass ––  that bar?

Here’s how the fight played out inside the PFL cage:

No touch of the gloves. Zurcher strikes first with a leg kick, and Stockman fires back with a nice right hand. Now a nice knee up the middle from Stockman. Zurcher eats it well, but those shots landed early.

Zurcher’s back on the leg kicks, and Stockman pushes forward, initiating the clinch against the cage. Stockman changes levels and looks for the takedown, but Zurcher defends well, reverses, and works toward Stockman’s back.

Stockman senses it, hits the switch, and they separate. Another leg kick from Zurcher is met by a spinning backfist-high kick combo from Stockman.

Nice throw from Stockman, and the fight hits the mat. Stockman briefly finds himself in top position, but Zurcher’s right back to his feet. It’s Zurcher this time on the high single, and Stockman touches the canvas, but he’s right back up.

Solid exchanges on the feet here with both men landing well. Big overhand right lands from Zurcher and seems to have awakened Stockman. He presses forward with big shots, landing a series of right hands before Zurcher counters with a nice knee.

Two nice lefts to the body from Stockman before going upstairs. With 10 seconds left in the round, they cling against the cage, break, and throw leather to close out the round.

Both fighters leaving it all out in the cage! Who is edging the 1st round?#PFLonFuboTV LIVE NOW
🇺🇸 https://t.co/R67yD8VVFQ
🌍 https://t.co/StPf5kcxnW pic.twitter.com/u9MC5jL7Im

Zurcher’s out quickly here, putting Stockman on his heels. Stockman wades forward aggressively and eats a solid left from Zurcher for his troubles.

They clinch against the cage, and Zurcher drags the fight to the mat, immediately taking Stockman’s back in a scramble. He’s threatening the rear-naked choke in an instant, and Stockman’s in trouble.

Zurcher sinks in the body triangle as he looks for the choke, but Stockman’s fighting the hands well, and he’s out of immediate danger. That looked close for a second, and commentator Sean O’Connell even thought it was a wrap.

Although Stockman’s now out of the choke, Zurcher still has his back with the body triangle cinched. Zurcher just isn’t letting go here. Stockman’s fighting and scrambling, but he can’t shake the human backpack.

The round ends with Zurcher switching to an armbar, nearly getting it before the bell. We go to the third.

They’re out quickly, with Zurcher digging in a series of leg kicks. Stockman counters with some powerful punches, but they wind up against the cage, with Zurcher again looking to take his opponent’s back.

This time, Stockman isn’t having it, and he reverses position, winding up on top in a scramble. They get back to their feet, and Stockman lands a massive right hand that appears to stun Zurcher. Another one. Another one. He’s cracking right now, but Zurcher is still there and still dangerous, winging counters of his own in return.

Zurcher survives that temporary onslaught, and they’re back against the cage, Zurcher landing knees. They separate, and Zurcher lands a nice left hook before getting back to his leg-kicking ways.

Some great wrestling scrambles here, with both men finding some success in scrambles. They clinch against the cage with 30 seconds to go. Stockman with the funk roll, but Zurcher winds up on top and finishes the fight there.

We head to the judges.