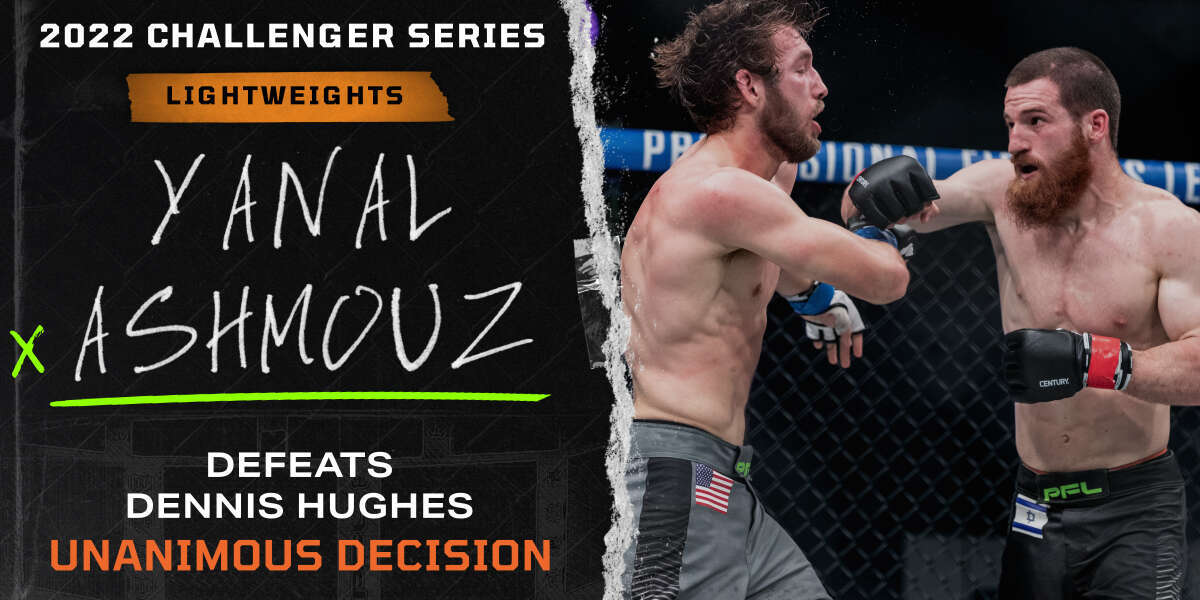 Week 5 of the 2022 PFL Challenger Series brings the lightweights front and center for another night of high-stakes action inside the cage.

By night’s end, four 155-pound competitors will add a win to their professional record –– but only one will take home a fresh PFL contract.

With an impressive enough performance, one man might even skip the line and head directly to the 2022 PFL Lightweight Tournament, punching his ticket to a chance at $1 million and the PFL lightweight strap.

Pretty solid incentive to put on a show, eh?

First up, it’s Israel’s Yanal Ashmouz (5-0) vs. Mississippi native Dennis Hughes (7-3). Ashmouz is not only undefeated but he’s never seen the judges’ scorecards, finishing all five of his bouts before the final bell (three knockouts, two submissions).

Here’s how their scrap went down inside the PFL cage:

They touch gloves, and Ashmouz fires away with a leaping switch kick. Hughes’ low kick is caught and countered nicely. Huge overhand left from Ashmouz misses, and Hughes bullies forward for the takedown. He secures it, but Ashmouz pops back to his feet –– only to get dragged back to the mat.

They’re back up with 3:55 left in the round. Hughes clearly wants to slow this fight down and dictate the pace. He’s all over Ashmouz, and while he hasn’t been able to maintain position on the ground, he’s more than happy to clinch and grind away here.

Beautiful switch from Ashmouz, and it’s now Hughes on his back instead, with Ashmouz hammering away with ground-and-pound. Some heavy shots getting through here.

A scramble ensues, and Hughes gets to his knees, where Ashmouz briefly threatens a front choke. It’s not there, and they’re back to their feet.

They immediately clinch once again, and now it’s Ashmouz looking to drag things to the ground. They separate, and Ashmouz is slinging pure heat. A high kick lands, followed by a strong right hook.

Wheel kick early from Ashmouz. He’s showing impressive variety and power on the feet. Now, they clinch, and Ashmouz trips Hughes instantly to the mat. He’s going to work from inside Hughes’ full guard.

Strong top position from Ashmouz here, and Hughes is unable to mount any significant offense from his back. He briefly looked to throw up a triangle attempt, but Ashmouz shut it down with a quickness. Not much to this round, but Ashmouz finishes strong and opens up with ground-and-pound with 10 seconds left.

We’re off to Round 3, with Hughes likely needing a finish if he wants to win it.

Twenty seconds in, and we have a clinch against the cage. It’s clear Ashmouz likes what he feels in these grappling exchanges, and he’s more than happy to get the fight back to the ground.

Hughes isn’t having it this time, though, and they separate to trade leather. High kick misses from Hughes, but he’s looking more comfortable on the feet here than he has in previous rounds. Ashmouz ducks for a takedown and Hughes counters beautifully with a knee.

They clinch, and Ashmouz lands a strong right hook on the break. Both men are scoring with some solid, solid shots here, possibly the most significant strikes of the fight.

Halfway through the round, Ashmouz gets his initial wish, and they’re back to the canvas. Some ground-and-pound and jockeying position here, but nothing too significant. Hughes gets back to his feet for a second, but Ashmouz is all over him, taking the fight right back to the ground.

Thirty seconds to go, and Hughes is ultra-active off his back, hoping for that Hail Mary submission. It’s not happening. This one’s headed to the judges.

That was a great tone-setter for the rest of the night –– but the result was pretty obvious. Ashmouz moves to 6-0 and registers the unanimous decision victory.