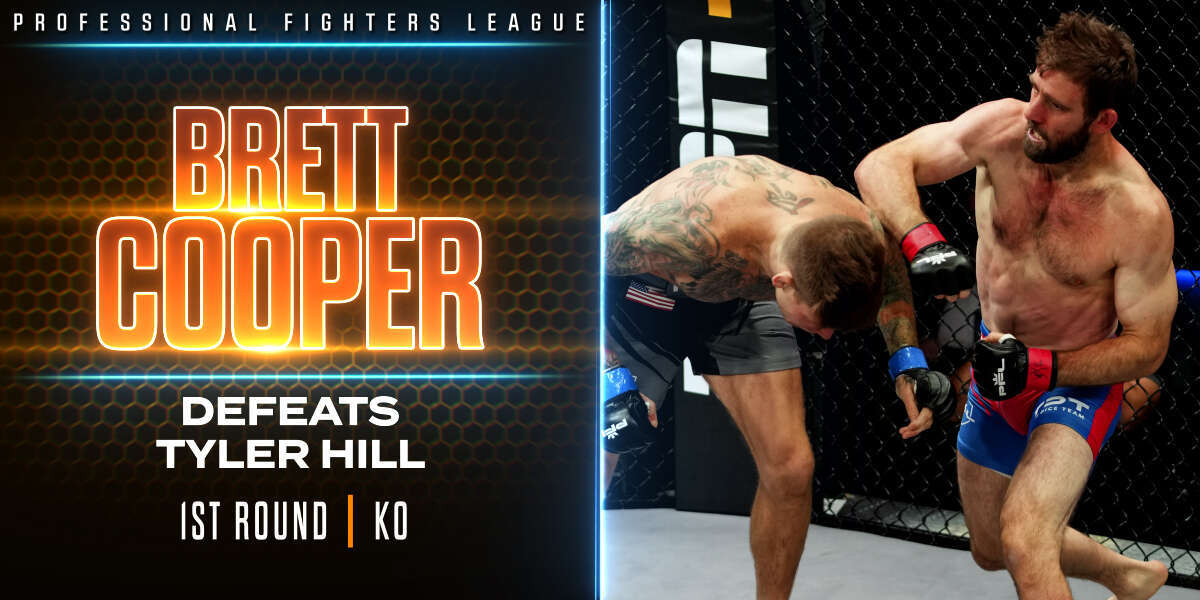 After serving as an alternate for PFL 2 in Atlantic City, Brett Cooper made his official PFL debut Friday evening at PFL Playoffs 1, 2021 against Tyler Hill.

Cooper entered the bout with a significant experience advantage, as his 27-15 record would indicate against Hill’s 10-5 clip.

Would that be enough to get the job done on fight night, or would the younger Hill emerge victorious?

We’re off here in the welterweight division. Hill looks for some leg kicks early, and Cooper drives for the takedown. He presses his foe against the cage and drags him to the mat. Hill, however, pops back to his feet, and the resume trading blows.

Another takedown attempt, another takedown secured for Cooper, but Hill again is able to get back to his feet. They strike some more, with Cooper surprisingly getting the best of it, and again Cooper gets in on a double leg and secures the takedown.

Hill bounces back up, but it’s deja vu, as Cooper’s right back on his legs taking him to the ground. They’re back up, and Cooper cracks Hill with a ferocious uppercut that puts him on wobbly legs. Cooper moves for the kill, and Hill is working on pure heart and grit right now.

Cooper tees off again and again, finally clipping Hill with a right hand that halts the action in Round 1.

Experience reigned supreme in this one, as Cooper took care of business with ease. His takedowns were unstoppable, and they appeared to fatigue Hill early, giving him the opportunity to pounce with powerful strikes. Hill had no answers, and referee Keith Peterson was forced to stop it just moments into the first frame.