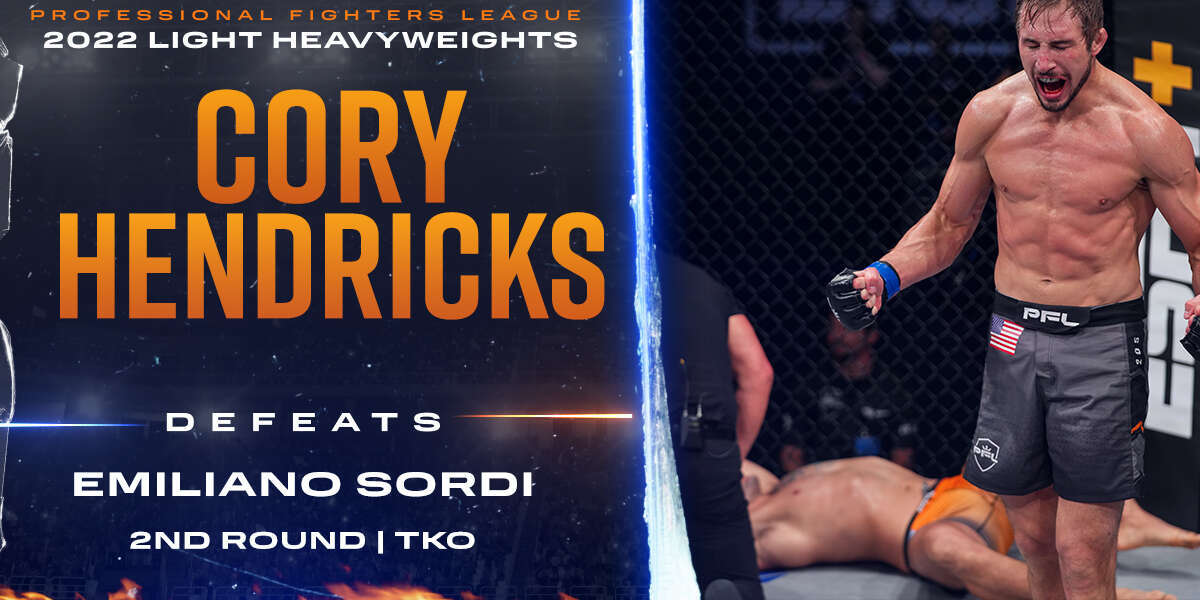 In our featured prelim, we have the 2019 Light Heavyweight champion and 2021 Semifinalist Emiliano Sordi returning to action against a tough opponent in Cory Hendricks who won his only PFL appearance last year but missed the playoffs.

Sordi looking every bit of the -300 favorite he is early as he seemingly tries to overwhelm Hendricks.  Hendricks remains unfazed though and changes levels to get the fight to the mat.

Hendricks is on top, but right away it’s Sordi attacking off his back as he snatches an arm and suddenly has a deeeeep armbar attempt.  It got very sweaty for Hendricks for a moment there, but he stacks Sordi and keeps pressure on him until he is able to escape the armbar.

Hendricks gets off some small ground and pound that was not very impactful and they continue to scramble for position.  Sordi finds himself attacking a heel hook but Hendricks is wise to it and rotates out.  Similar to the Stevie Ray fight earlier, Hendricks finds himself in a Sordi calf slicer but is able to escape and continue the scramble.

Both men attack subs and look for a position, and once again Sordi attacks a leg out of nowhere and gets in very deep on a kneebar as the round ticks away.  Hendricks throws a heavy bomb from the bottom as Sordi hyperextends the knee and the round ends.

Sordi is in trouble early to start the second frame!  Hendricks lands some heavy calf kicks that clearly affect Sordi and then starts opening up with the hands.

Sordi gets backed up into the cage and eats a 4 piece combo, he’s clearly hurt bad.  Ref tells him to fight back and Sordi wings and misses a monster overhand, easily my favorite response to a fightback command.

Sordi’s leg is clearly very compromised here, I’m not sure how much longer this fight is going.

All of the momentum is with Hendricks now and he drives in deep on a takedown and finishes it.  This might be a good chance for Sordi to catch his breath, but Hendricks simply won’t relent and keeps the pressure on.

Hendricks gets to the mount and feels Sordi is folding.  Hendricks starts to let the hands go and do some damage while Sordi just turtles up.  Sordi is blocking some punches, but he’s making no attempt to improve his position and the ref jumps in to stop it.

Hendricks picks up the biggest win of his career as a sizeable betting underdog and sets himself up big for this PFL season with a 5 point second round finish!

Cory Hendricks picks up a massive win as an almost 3 to 1 underdog, you love to see it!